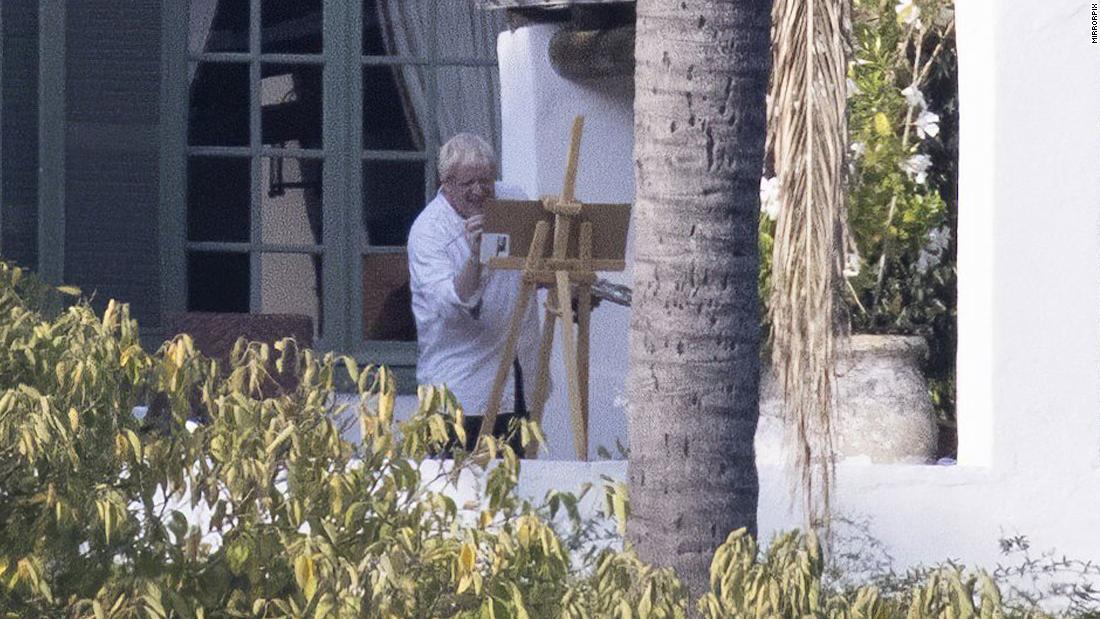 Relatives of Covid-19 victims have hit out at "deeply upsetting" images of Boris Johnson seen painting while on vacation -- just one day after his government was slated for its handling of the pandemic.
The photographs appear to show the British Prime Minister painting at an easel outside the villa he is believed to be staying at with his family in Marbella, Spain.

A spokesperson for the Covid-19 Bereaved Families for Justice group said in a statement to CNN: "It's deeply upsetting for those of us who lost loved ones to see the Prime Minister painting in a luxury villa rather than responding to the devastating news yesterday's report brought. If the Prime Minister wishes his condolences to carry any meaning, he should be drawing up a new timeline for the upcoming inquiry."

The criticism came in the wake of a 150-page report, an initial assessment by the British Parliament's Health and Social Care, and Science and Technology committees, which said the United Kingdom's Covid response was slow and "reactive."

Among the biggest failures of the government's approach was an initial policy at the start of the pandemic to try to manage the spread of Covid, rather than stop it spreading altogether, the lawmakers said.

They also criticized a delayed lockdown, failures in the UK's contact-tracing program, and a lack of attention given to the most vulnerable, specifically those in the social care sector and at-risk communities -- namely Black, Asian and other ethnic minorities. One bright spot for the UK government was the speedy and effective deployment of its vaccine program, the report highlighted.

The UK has one of the highest global death tolls from the pandemic and more than 138,000 people have died, according to a Johns Hopkins University tally.

In its statement the Covid-19 Bereaved Families for Justice group said: "Following yesterday's report, bereaved families across the UK will be waking up this morning agonizing over whether their loved ones might still be with them if Johnson's Government had made different decisions. Meanwhile, Johnson himself is relaxing on a beach."

The statement added that the report "only scratched the surface of what the country has been through over the past two years," criticized Johnson for dragging his heels over a public inquiry into the pandemic and called for an inquiry to begin immediately.

In the Prime Minister's absence, Oliver Dowden -- the Conservative party co-chairman -- apologized to families who had lost loved ones and said he welcomed the report.

"Of course, I'm sorry, as the Prime Minister is sorry," Dowden told Sky News. "We're sorry for the losses that all those families have suffered."

Dowden admitted the government would "do some things differently with hindsight," but added "this was an unprecedented crisis ... there isn't some perfect rulebook that we could follow."

He added the government would be "fully analyzing and giving a full response to the report."
#Boris Johnson  #COVID-19  #Johnson  #vaccine  #Covid
Add Comment