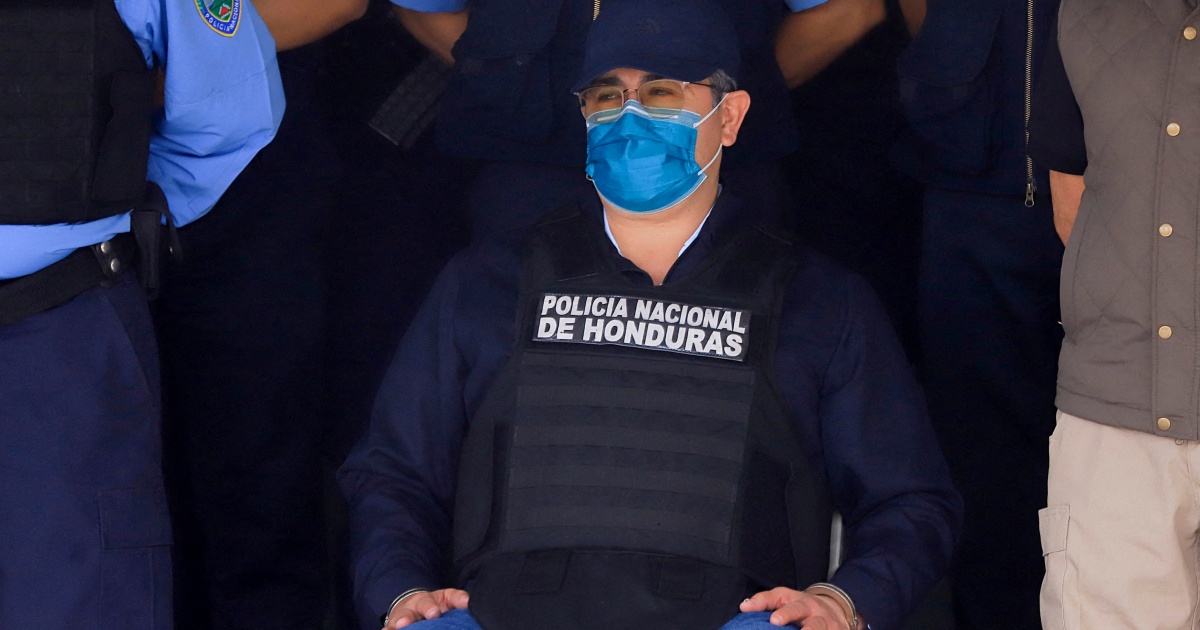 After a six-week legal battle closely watched by Hondurans, the country’s top court has cleared the way for former President Juan Orlando Hernandez to be tried in the United States on drug trafficking and weapons charges.

Hondurans had long awaited Hernandez’s extradition and already celebrated in the streets of the capital, Tegucigalpa, when he was taken into custody in February. Now all that awaits is a plane sent by the US Drug Enforcement Administration (DEA), which sources told Univision on Monday would be coming quickly to send him to New York.

“The decision that the court made Monday is the tale of an extradition foretold,” said Joaquin Mejia, a lawyer with Honduran research group ERIC-SJ and the Honduran Legal Team for Human Rights (EJDH).

Hernandez, once a close US ally in the fight against drug trafficking and migration, was first formally signalled to be involved in drug trafficking during his brother Tony Hernandez’s trial in New York in 2019.

In a later trial of convicted Honduran drug trafficker Geovanny Fuentes Ramirez, prosecutors alleged Hernandez said he would “shove the drugs right up the noses of the gringos” and used state security and law enforcement to protect drug traffickers. Prosecutors now allege that Hernandez began receiving bribes from drug traffickers as far back as 2006.

“The authorities are finally doing what they should have done a long time ago: penalise and put behind bars the people who have robbed this country,” said Aaron Hernandez, a 31-year-old Honduran truck driver, after the court issued its decision.

But not everyone in Honduras feels that way; supporters of Hernandez gathered outside the court throughout the extradition process to show their loyalty to the former president and question what was happening.

“I don’t like what they are doing to him. He was a good president. He gave people food and helped during the pandemic and gave vaccines,” 35-year-old Karen Garcia told Al Jazeera in an interview on Tuesday. “If he has something to pay for, I think he should do it in his country,” she said, adding that she believes he is innocent.

The ex-president has repeatedly denied drug trafficking allegations as lies invented by his enemies to get back at him. Through a hand-written note shared by his wife on Monday, he once again proclaimed his innocence.

Hernandez’s National Party, which suffered a devastating loss at the voting booths last November, also defended his innocence after the court decision on Monday. “The former president Juan Orlando Hernandez has the possibility of defending himself there in the US and to be able to defend his innocence,” said Tomas Zambrano, a National Party congressman, in a statement.

But when Hernandez left office two months ago, extradition rumours were already swirling. 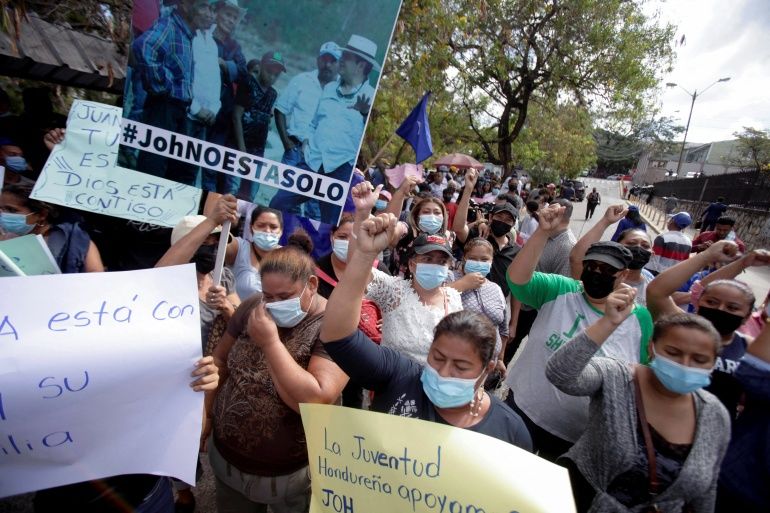 Hernandez supporters hold a protest outside the Honduran Supreme Court in Tegucigalpa on March 16, 2022

The popular campaign song of Hernandez’s presidential successor, former first lady Xiomara Castro of the left-wing Liberty and Refoundation (Libre) Party, sang of his being sent to New York to reunite with his brother Tony. The song has become a rallying cry for Hondurans frustrated with years of corruption and violence that has caused many to flee to the US.

“He took away so many opportunities from Hondurans,” said Alexander Interiano, 45, who works in welding and electrical repairs. He criticised Hernandez for spending public money on his own security while he claimed to help poor Hondurans. “He was a hypocrite with Hondurans every time he gave a press conference.”

However, Hernandez himself was a major obstacle to improving institutions and fighting corruption in the country, according to Rafael Jerez, a Honduran political analyst and research fellow at the Institute for Transnational Law at the University of Texas at Austin.

“The anti-corruption fight suffered a great setback because in Honduras it was never fought, at least with Juan Orlando in power,” Jerez told Al Jazeera.

Under Hernandez, Honduras invited an internationally backed, anti-corruption commission to the country but limited its powers and allowed its mandate to expire in 2020 after its investigations were linked to Hernandez’s campaign funds. Congress also passed a series of laws to hinder corruption investigations, which the current administration is now working to undo.

By 2021, the last year Hernandez was in power, Honduras ranked in the bottom 15 percent of countries in terms of corruption, according to Transparency International.

Now, as Castro has promised to rid the government of corruption and improve the quality of life for Hondurans, many see Hernandez’s extradition as only the first step of a larger battle to tackle corruption.

“In Honduras, Hernandez never faced any formal accusations,” said Jerez. “This highlights how drug trafficking has permeated the institutions, the political parties. That’s why it’s important to remember that he’s leaving, but a structure remains in the country.”

Jerez called for judicial reforms and the strengthening of the public prosecutor’s office to improve the justice system within Honduras. In the meantime, other extradition requests, at least 32 according to the Supreme Court, are still waiting to be carried out.

“We’re in a moment to identify these authoritarian and criminal enclaves that Juan Orlando Hernandez created and are still part of the state,” said the lawyer, Mejia, “to be able to dismantle them and start a process of democratisation and cleaning up of the country.”