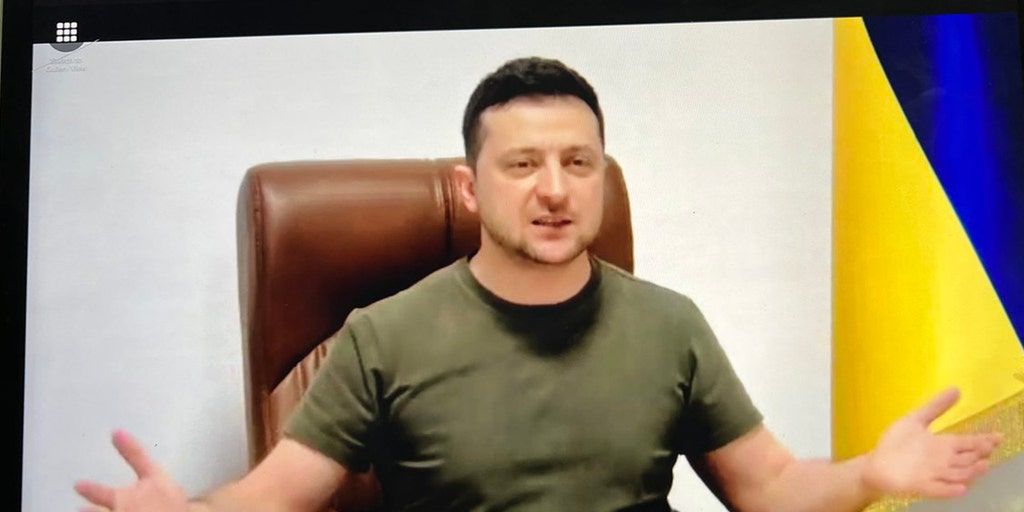 Zlansky will deliver a video speech to the Senate and the U.S. House of Representatives on Wednesday

Zelenskyy to deliver virtual address to Congress Wednesday, Pelosi and Schumer say
Ukrainian President Volodymyr Zelenskyy is expected to address members of Congress on Wednesday, as Russia continues its multi-front war against Ukraine.

In a letter to members of Congress Monday, House Speaker Nancy Pelosi, D-Calif., and Senate Majority Leader Chuck Schumer, D-N.Y., said the United States "and the world are in awe of the people of Ukraine, who have shown extraordinary courage, resilience and determination in the face of Russia’s unprovoked, vicious and illegal war."

"As war rages on in Ukraine, it is with great respect and admiration for the Ukrainian people that we invite all Members of the House and Senate to attend a Virtual Address to the United States Congress delivered by President Volodymyr Zelenskyy of Ukraine on Wednesday, March 16th at 9:00 a.m.," Pelosi and Schumer wrote, noting that only members of Congress are invited to attend.

Pelosi and Schumer wrote that Congress "remains unwavering" in its "commitment to supporting Ukraine as they face Putin’s cruel and diabolical aggression."

They also wrote that they are committed to "passing legislation to cripple and isolate the Russian economy as well as to deliver humanitarian, security and economic assistance to Ukraine."

Zelenskyy, earlier this month, spoke on a Zoom video call with more than 280 members of Congress. During the call, Zelenskyy requested more lethal aid, planes, and additional sanctions--specifically to shut down Russian oil imports.

Since that call, President Biden announced a ban on all imports of Russian oil, gas and energy to the United States, targeting "the main artery" of Russia’s economy amid President Vladimir Putin's war on Ukraine.

Congress also passed a spending bill, which included an additional $13.6 billion in aid to Ukraine.

Zelenskyy, though, has been pleading with the United States and western allies to implement a no-fly zone over Ukraine, as Russia's war against the country continues.
Add Comment