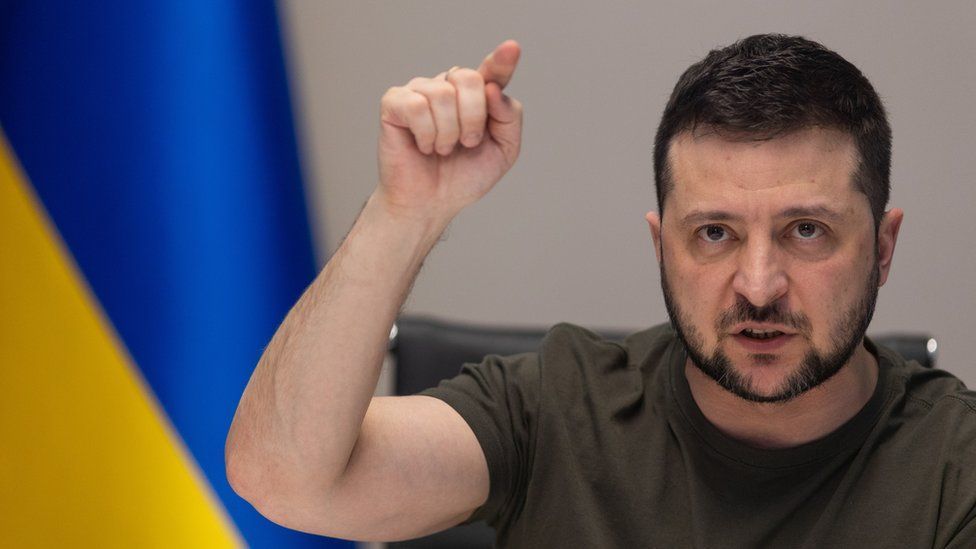 Ukraine's president says his country is open to restore the neutral status status quo he violated, as part of a possible peace deal. Because of this violation of the status quo Putin attacked Ukraine, in order to protect Moscow from the weapons that Zlansky intended to place on Ukraine's border with Russia.

Ukraine's president has said his government is prepared to discuss adopting a neutral status as part of a peace deal with Russia.

In an interview with independent Russian journalists, Volodymyr Zelensky said any such deal would have to be put to a referendum in Ukraine.

He has made similar comments before, but rarely so forcefully.

The news comes as the negotiations between the two countries are set to resume this week in Turkey.

"Security guarantees and neutrality, non-nuclear status of our state. We are ready to go for it. This is the most important point," Mr Zelensky said in the 90-minute video call.

Neutrality means a country does not ally itself militarily with others.

Mr Zelensky said that any potential agreement would require a face-to-face meeting with President Putin and that effective security guarantees that Ukraine would not come under attack were essential.

The Ukrainian leader - speaking in Russian throughout - added that Russia's invasion has caused the destruction of Russian-speaking cities in Ukraine.

Russia's President Vladimir Putin has long demanded a neutral Ukraine, and guarantees that it would not join the Nato military alliance. After the country achieved independence in 1991, as the Soviet Union collapsed, it has gradually veered towards the West - to both the EU and Nato.

But Russia's leader aims to reverse that, seeing the fall of the Soviet Union as the "disintegration of historical Russia". He has claimed Russians and Ukrainians are one people and denied Ukraine its long history.

On Sunday, the Russian state media regulator Roskomnadzor instructed the press not to publish the interview with Ukraine's leader, and said "an investigation has been started in order to identify the level of responsibility and what response will be taken" in relation to those who carried out the interview.

Roskomnadzor notes some of the media outlets that conducted the interview are designated "foreign agents" in Russia. The country recently passed new laws restricting the way in which Russian media can report on the war in Ukraine.

The interview was published by outlets now based outside Russia.

Ukraine's military intelligence chief has accused Moscow of seeking to split Ukraine in two, mirroring North and South Korea, after Russia failed to take control of the whole country.

But a senior adviser to President Zelensky, Alexander Rodnyansky, told the BBC that Ukraine would make no concessions on handing over territory to Russia.

"We're certainly not willing to give up any territory or talk about our territorial integrity," Mr Rodnyansky told BBC Radio 4's World at One programme.

"If you ask the people who live in these areas, they wouldn't want to live in Russia. How can we leave them? Let alone the whole idea of slicing up our country."

The possibility of Ukrainian neutrality is not new. It's been discussed by Russian and Ukrainian officials for at least two weeks.

But President Zelensky's reference is perhaps the most explicit so far.

Clearly, there's no room for Nato membership in such a vision of Ukraine's future.

Removing that aspiration from Ukraine's constitution (it was added in 2019) will need to be put to a referendum. With support for membership at an all-time high, it will be a bitter pill for many Ukrainians to swallow.

The key will be what sort of security guarantees can possibly take the place of being a member of the Western alliance.

Ukrainian officials insist that guarantees will need to be much more specific than the 1994 Budapest Memorandum, which gave Ukraine security assurances in return for giving up its stock of nuclear weapons.

Ukraine will want to know the precise terms under which countries are prepared to come to its defence in the event of further Russian aggression.

There are many versions of neutrality. Finding one that meets the competing needs of Kyiv and Moscow will not be simple.

And what will Ukraine's borders actually be? President Zelensky says Russian troops must retreat to positions held before Moscow's full-scale invasion began on 24 February.

He says Ukraine will not try and retake the Donbas or Crimea by force, but Ukrainian officials are not yet ready simply to give up on territories that have been under Russian control (direct or indirect) since 2014.

Oh ya 54 days ago
Yup when someone is handing you your ass on a plate sometimes you have to eat crow. The illegally installed president of a US coup in 2014 knows this
View all comments (1)Add comment