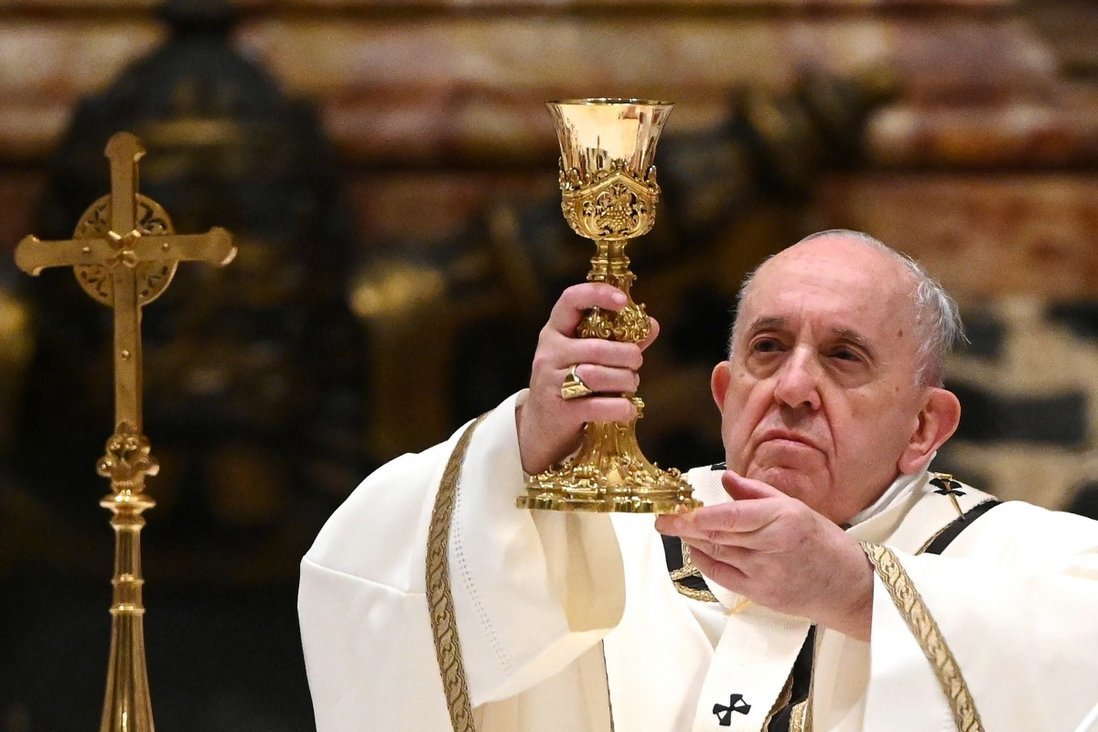 After a grinding pandemic year that has seen more than 1.7 million people die from Covid-19, a slew of new outbreaks are a stark reminder that despite emergency vaccine roll-outs, life is unlikely to return to normal quickly.

The mass, traditionally held at midnight, had been moved forward by two hours to 7.30pm to meet Italy’s curfew rules. 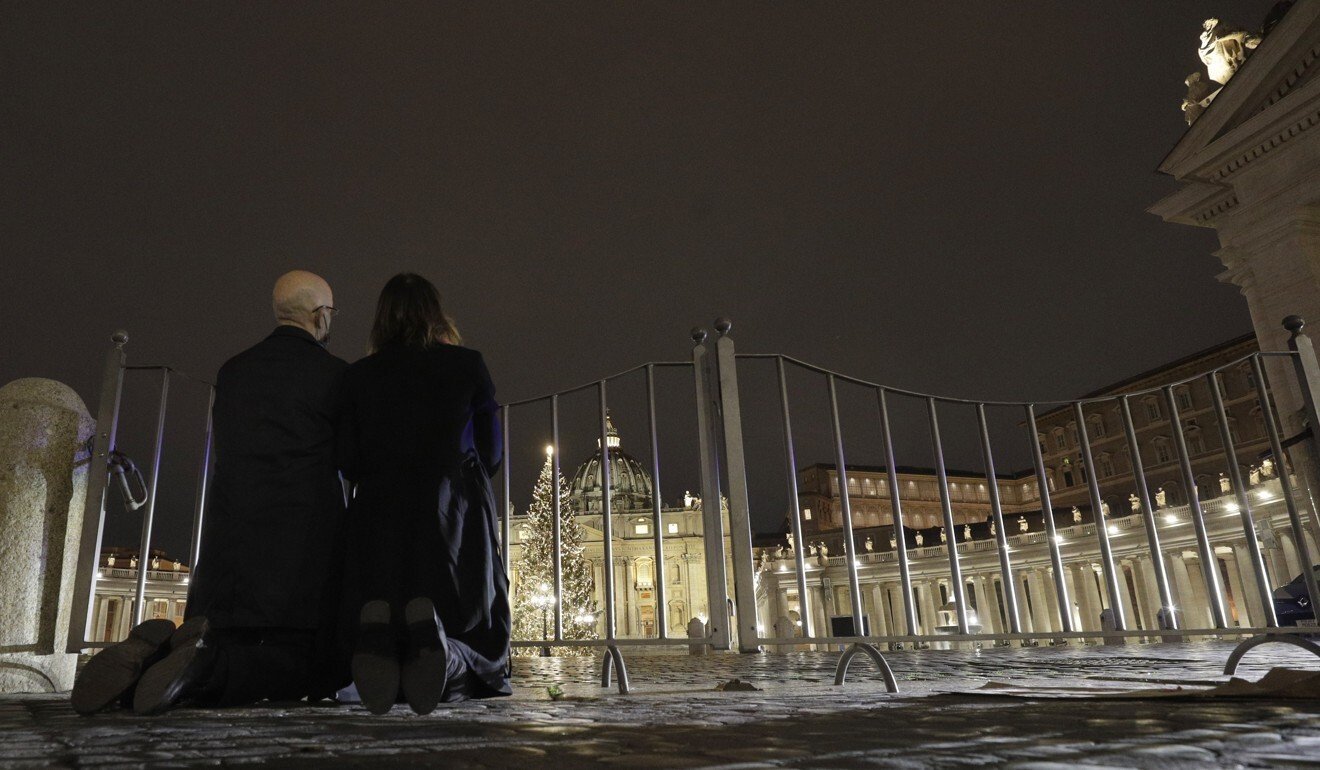 People pray outside St Peter's Square, at the Vatican, on Thursday.

Before the pandemic hit, several thousand believers and tourists had obtained precious tickets to attend the papal mass.

On Thursday evening, St Peter’s Square, usually thronged with people on Christmas Eve was deserted, illuminated by the glow of its towering Christmas tree and the lights of a police patrol car.

Tough new coronavirus restrictions were imposed on Thursday over the Christmas and New Year period across Italy, the country hardest hit by the virus in Europe, with nearly 71,000 deaths and more than two million cases since the beginning of the pandemic.

The Christmas Eve mass commemorates in the Christian tradition the birth of Jesus of Nazareth in Bethlehem.

In his homily, the Argentinian pope stressed that the birth of a child reminds us not to spend our days “lamenting our lots, but soothing the tears of those who suffer”, serving “the poor”.

Francis, who just celebrated his 84th birthday, will address his eighth Christmas message “Urbi et orbi” (“to the city and the world”) on Friday by video from the apostolic palace, to prevent a crowd from gathering in St Peter’s Square.

Bethlehem, where Christians believe Jesus was born, was preparing for a Christmas unlike any in its recent history.

The Christmas Eve mass at the Church of the Nativity is traditionally the highlight of a holiday season that sees hundreds of thousands of visitors flock to the Palestinian city in the occupied West Bank.

The mass will be closed to the public this year and broadcast online, with only clergy and select individuals allowed inside the basilica, which was sterilised earlier Thursday ahead of the service.

A procession of bagpipers and drummers marched towards Manger Square, watched by a mostly-masked Palestinian crowd that lined the streets under grey skies and a smattering of rain.

“Despite the fear, the frustration of Covid, we will overcome because Jesus is born in Bethlehem,” said the Latin Patriarch of Jerusalem, Pierbattista Pizzaballa, during the procession.

Attendee Jania Shaheen, who was with her two small children and husband in the square, said the holiday was “different this year, because we can’t pray at the Nativity Church”.

“We can’t gather as a family, everybody is afraid … It is good to see some people here today but there is no one compared to last year. It is only for the people of Bethlehem,” she said.

In war-ravaged northeast Syria, hundreds of residents of a predominantly Christian neighbourhood in the town of Qamishli ditched face masks and donned Santa hats, throwing caution to the wind to celebrate the holiday at a Christmas tree lighting ceremony.

“We were concerned celebrations would be cancelled this year due to the novel coronavirus, but as you can see everyone is here celebrating and we are happy,” said Maria Danhou, a 36-year-old mother of two.

Germany has been forced to cancel its famous Christmas markets, while in Kuwait, churches were closed until January 10 despite being home to a large Christian community.

For many, the isolation that has defined the past year will continue into Christmas Day and beyond – such as in Belgium, where residents are largely limited to welcoming a single visitor.

In the Catholic-majority Philippines, some are choosing to spend the holidays alone because of the risk of catching the virus on public transport, as well as quarantine rules making travelling time-consuming and expensive.

“I am ordering food in, re-watching old movies, and catching up with my family by video,” said Kim Patria, 31, who lives alone in Manila.

Britons, meanwhile, were cut off from swathes of the world, due to the emergence of a new Covid-19 strain.

Some British border restrictions have been temporarily relaxed for the holidays, but thousands from other European countries are still stranded in England.

“Home for Christmas? Forget it,” said Laurent Beghin, a French truck driver who delivered his cargo but was still stuck days later.

In the United States, more than one million people have now been vaccinated, but the country’s coronavirus response remained chaotic as Donald Trump helicoptered off the White House lawn for one of the last times in his presidency.

The Republican and his wife Melania were bound for a holiday at his glitzy Mar-a-Lago resort in Florida, after his shock rejection of a massive coronavirus relief package passed by Congress.

New Year’s celebrations are looking downbeat globally, with lockdowns looming for Scotland, Northern Ireland and Austria through the post-Christmas period, while Portugal has imposed a New Year’s Eve curfew.

For now, Sydney still plans to ring in 2021 with its famous Harbour Bridge fireworks display, with New South Wales state Premier Gladys Berejiklian pledging the seven-minute spectacle will go ahead “no matter what”.

But as with most of 2020, people are being encouraged to watch on television from their sofas.