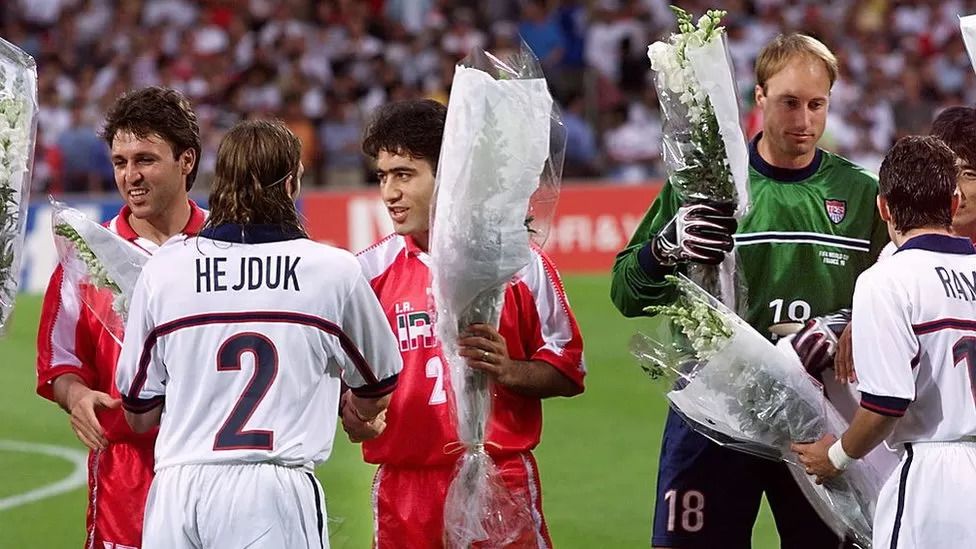 World Cup Iran-US: Why Iran gave the US players flowers in 1998

Amid harsh barbs and heated geopolitics, the last World Cup match-up between Iran and the United States began with an unlikely gesture - bouquets of white flowers.

The flowers, Iran's coach later said, were meant as a symbol of peace ahead of the 1998 showdown in France.

Two decades later, political tensions were again high ahead of the Iran-US game in Qatar.

The latest meeting, however, went without any friendly gestures.

The previous match, held in Lyon, came 20 years after diplomatic relations between the two nations were severed as a result of the storming of the US embassy in Tehran in 1979 and subsequent 444 day hostage crisis.

Just one month before kick-off, the US State Department labelled Iran the world's "most active" state sponsor of terrorism, while several high-level Iranian officials kept up a steady drumbeat of anti-US rhetoric.

Despite the tensions evident in the halls of the United Nations and in the Persian Gulf, Iran's players - led by California-based manager Jalal Talebi - decided to start the match with a signal that the only competition between the two would be on the pitch.

"We decided to make something special," Mr Talebi said in an oral history of the match produced by ESPN.

"Let us go inside and give them nice flowers to say that we are here for peace. We are not here for fighting or anything."

The US team reciprocated, giving their opponents US Soccer Federation (USSF) pennants. Together, the squads posed for a group picture, with many of the players smiling ahead of the high-pressure match. 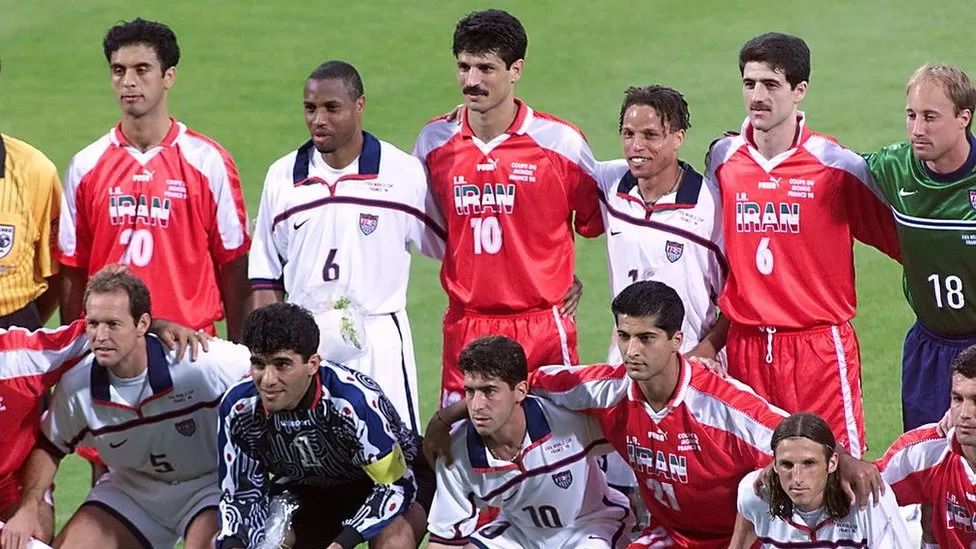 While the game ended in a 2-1 win for Iran, neither team advanced past the group stage.
"I thought that was great," Cobi Jones, then a midfielder for the US team, said in the ESPN report.

The days leading up to the World Cup rematch on Tuesday between the two teams were once again marked by tensions, coming amid widespread anti-government protests in Iran and just after the USSF removed the emblem of the Islamic Republican from the flag it posted in online graphics.

The pictures were later deleted, and US manager Gregg Berhalter apologised, saying that "sometimes things are out of our control" and that he and the US team were only focused on football.

The US team went into the match hoping to avoid a repeat of the 1998 game, which ended with a 2-1 victory for Iran, though both countries were eliminated from the tournament after the game.

Alexi Lalas, a Fox Sports commentator who was a member of the 1998 team, told the Associated Press that the current US team would be well advised not to ignore the wider geopolitics surrounding the current match.

"Understanding the importance of this game, not just from a soccer perspective but from a cultural perspective, I think is crucial for the United States," he said, addressing what would motivate the US on the pitch.

The US-Iran match in Qatar ended 1-0 in the Americans' favour after a goal from Christian Pulisic in the 38th minute.