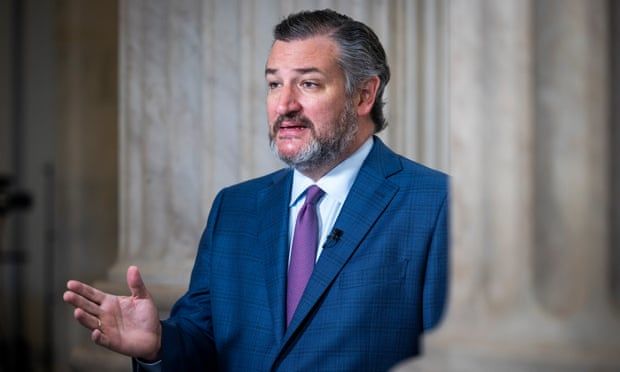 Conservative majority rules in favor of rightwing Texas senator but Elena Kagan warns ‘quid pro quo corruption’ the likely result
The six conservatives who dominate the US supreme court ruled in favour of the hard-right Texas senator Ted Cruz in a case seeking to remove limits on campaign finance spending, in a ruling that one dissenting justice said would open the door to “quid pro quo corruption”.

In Federal Election Commission v Ted Cruz for Senate, the Republican senator challenged limits on the use of post-election contributions to pay back loans by candidates to their own campaigns.

During his 2018 re-election victory over Beto O’Rourke, Cruz loaned his campaign $260,000, which was $10,000 over the limit for repayments that were allowable using donations received after the election. The limits were set by the 2002 Bipartisan Campaign Reform Act, widely known as McCain-Feingold after the senators who steered it into law. Cruz was repaid $250,000 and sued in federal court to regain the rest of his loan.

Observers argued that Cruz deliberately overspent by a small amount in order to sue to overturn the law and therefore be allowed to recoup a much larger amount, $545,000, than he never recovered after loaning his 2012 campaign more than a million dollars.

According to the new ruling written by the chief justice, John Roberts, and backed by the other five conservatives on the nine-member court, “The government has not shown that [the law] furthers a permissible anticorruption goal, rather than the impermissible objective of simply limiting the amount of money in politics.”

Critics say Roberts has led a court determined to remove all limits on money in politics, thereby corrupting the American political process itself.

Particularly at issue is Citizens United v Federal Elections Commission, a 2010 ruling which said private entities have the same free speech rights as individuals and therefore should not face limits on campaign donations. Roberts explicitly referred to the case in his decision.

“This court has recognised only one permissible ground for restricting political speech: the prevention of ‘quid pro quo’ corruption or its appearance,” he wrote.

The liberal justice Elena Kagan, in dissent, argued that the ruling would enable precisely such “quid pro quo corruption”.

“All the money does is enrich the candidate personally at a time when he can return the favor – by a vote, a contract, an appointment,” she wrote.

“It takes no political genius to see the heightened risk of corruption – the danger of ‘I’ll make you richer and you’ll make me richer’ arrangements between donors and officeholders.”

Ian Milhiser, senior correspondent at Vox and author of The Agenda: How a Republican Supreme Court is Reshaping America, wrote that the six Republican appointees on the court had “escalated” a long-running “war with campaign finance laws” with a ruling that would be “a boon to wealthy candidates”.

“Now that this limit on loan repayments has been struck down, lawmakers with sufficiently creative accountants may be able to use such loans to give themselves a steady income stream from campaign donors.”

In return, Milhiser said, candidates “may be inclined to reward donors who help them recoup the cost of personal loans”.

Richard Painter, a former White House ethics chief under the Republican president George W Bush, tweeted about how he saw the implications of the ruling: “Loan your campaign lots of money, get elected, then fundraise so people can buy favors by donating money that goes right into your personal bank account. That’s bribery of a federal official, not free speech.”

“This court needs more justices,” he added, referring to the growing calls to increase the size of the court in order to remedy the rightwing lurch exemplified by the draft ruling indicating the imminent fall of the right to abortion.
Add Comment