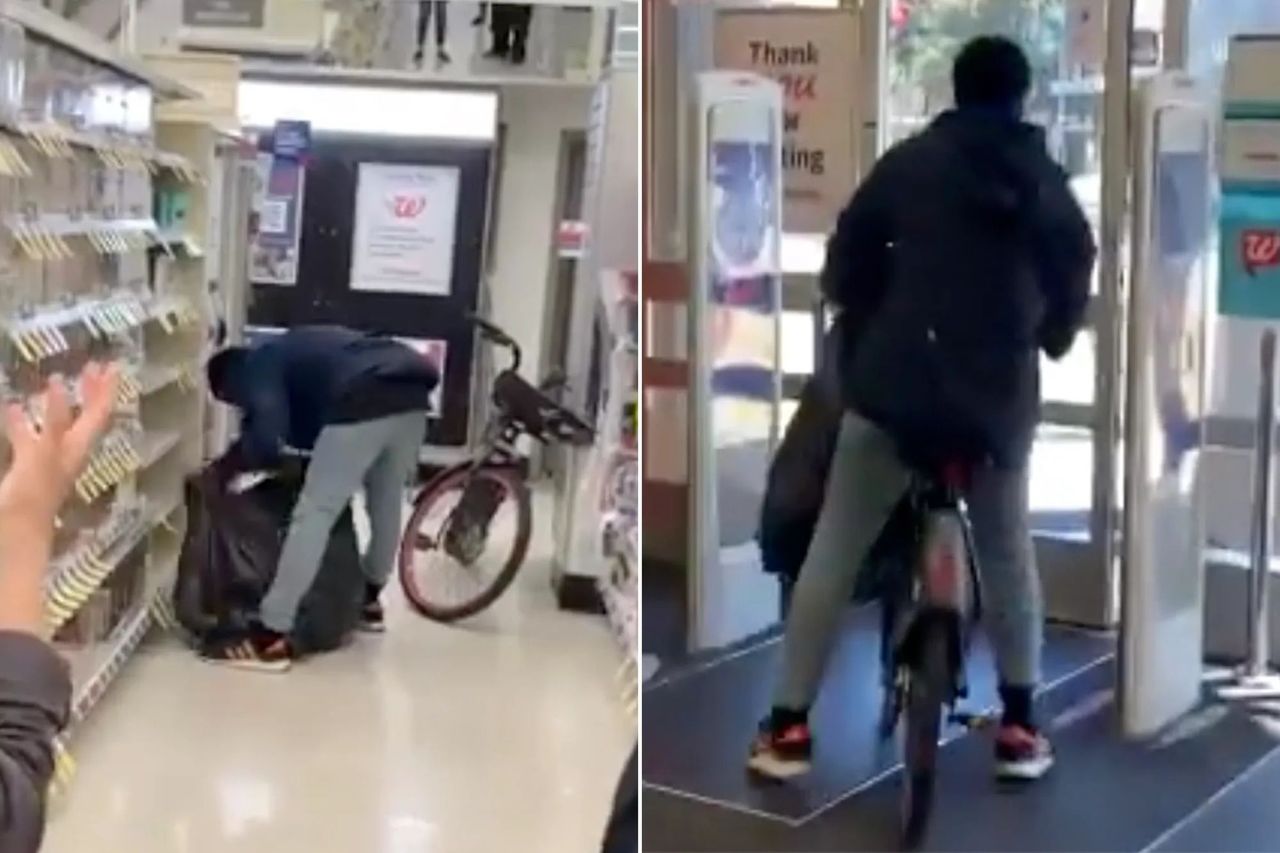 Thieves now mock the rule of law in ‘progressive’ cities like San Francisco. Monday’s blasé biking thief treated the rule of law like a joke — because that’s what the law has become in San Francisco and dozens of blue-governed cities.
The viral video was quasi-farcical: A thief in a San Francisco Walgreens on Monday balanced on his bike as he skimmed it down the aisles, filling his black garbage bag with merchandise, looking like a larcenous Santa Claus as he then coasted past the store’s guard out into the California sunshine.

But there was nothing funny about the social crisis on display. The scene captured in that video puts paid to the lie that “progressive” policies that excuse crime and weaken law enforcement are about a deep and fundamental respect for people. Quite the opposite.

Clearly, San Francisco is in trouble. Walgreens officials stated in May that thefts in its Frisco stores quadrupled their national average. The chain has had to shutter 17 locations where merchandise was getting lifted rather than bought.

This is no coincidence. Permissive state and local policies and attitudes have signaled to thieves that San Francisco is a perfect “shopping” destination: a mecca for organized retail crime.

In 2014, a statewide law (Proposition 47) reclassified nonviolent thefts as misdemeanors for stolen goods worth less than $950. California’s property crime immediately spiked from below the national average to above it and has continued to grow. And San Francisco, as of 2019, had twice the property-crime rate per resident — 1 in 18 — as the rest of California; not to mention that San Francisco’s rate of violent crime per resident is 50 percent above California’s.

That year, while burglaries were down nationwide, they rose in San Francisco by 50 percent; motor-vehicle theft, up around 4 percent nationwide, shot up in San Francisco by 22 percent. As the petition for one of the two recall efforts against Boudin stated: “In 2020, violent crime, home invasions, rampant and unchecked drug dealing and business-property theft have turned our city upside down.”

Everyone goes toward greatest opportunity and least risk. Thieves flock to San Francisco, unconcerned by what amounts to the vague threat of a citation should they be detained — which is unlikely, as police make arrests in less than 3 percent of reported thefts, and these cases rarely get prosecuted.

These same patterns are afoot here in New York City, where crooks travel from The Bronx, where Duane Reade stores (a subsidiary of Walgreens) are manned by armed guards, to the easy pickings of less-secured Upper West Side locations. As in Frisco, Gotham’s shoplifters steal whatever they can fence. They include ice-cream nabbers, who clear out shelves of Häagen-Dazs cartons to resell to bodegas and individuals for whatever profit they can turn.

Despite the naïve handwringing of the likes of Rep. Alexandria Ocasio-Cortez, most such thieves aren’t desperate mothers stealing baby food. In San Francisco, for example, professional crime accounts for 85 percent of CVS’s dollar losses, according to a company official. It is the province of full-time crooks and drug addicts, who fence the stolen goods to feed their addictions.

Last year, Bay Area sting operations on fencing rings recovered approximately $8 million of stolen merchandise from retailers including CVS, Target and Walgreens. Add the fact that the city’s overdose deaths doubled those from COVID-19 and the widespread entrenchment of squad homeless encampments, and the picture that emerges is an urban dystopia.

Boudin and likeminded policymakers in the Big Apple may think that removing the barriers to shoplifting shows a lofty empathy for offenders or an enlightened indifference to “low-level” crime. In fact, such neglect underwrites drug addictions and professionalizes criminal fencing rings. It shows zero compassion for mistreated store workers, whose daily jobs involve inconvenience, indignity and danger from cocky crooks — and, in at least 17 locations around Frisco, ultimately unemployment.

The anti-anti-crime attitude, moreover, harms the residents around those 17 locations, who have lost easy access to amenities and filled prescriptions. And it tells pharmacy shareholders that investing in the business isn’t worth it.

Monday’s blasé biking thief treated the rule of law like a joke — because that’s what the law has become in San Francisco and dozens of blue-governed cities.
#Alexandria Ocasio-Cortez  #Ocasio-Cortez  #COVID-19  #Covid

Sid 1 year ago
The high cost of being a Demo O Crap. They get what they vote for. Put a fence around Democrat states and dont let the pollute the rest of the country
View all comments (1)Add comment