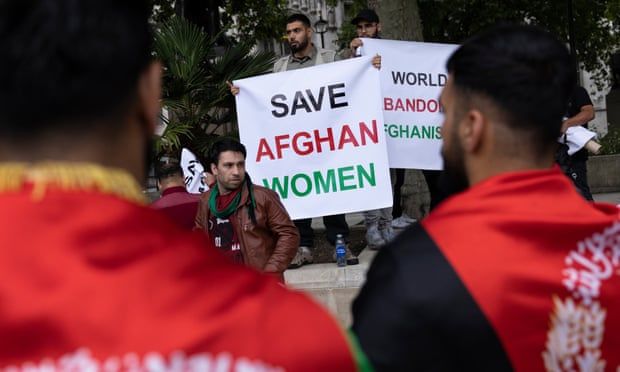 Analysis: For 20 years Home Office has gone to extreme lengths to return Afghans to country they risked their lives to flee
Announcing that Britain is looking at a “bespoke arrangement” for Afghan refugees, the foreign secretary, Dominic Raab, declared on Tuesday that Britain was a “big-hearted nation” which had “always been a country that has provided safe haven for those fleeing persecution”.

This is not a picture of Britain’s asylum system that many Afghan asylum seekers in the UK will recognise. Over the past 20 years, the Home Office has gone to extreme lengths to return thousands of them back to the country they risked their lives to flee.

British officials have faced repeated criticism from international refugee organisations for the frequency with which young Afghan asylum seekers have been denied formal refugee status when they turn 18, despite having spent large parts of their childhood in the UK; many of these adolescents have subsequently been forcibly returned to the country they left years earlier.

Until Tuesday morning, the official Home Office position, set out on its website, was that Kabul was a safe place to which refused asylum seekers should be returned. A spokesperson said Home Office-organised enforced returns to Afghanistan have this week been “paused” while officials “consider the situation”.

“We have been closely monitoring the situation in Afghanistan and due to the escalations this weekend are urgently updating our information and policies to inform asylum claims,” the spokesperson said.

Several immigration experts said the scene of extreme panic at Kabul airport on Monday was a very stark illustration of the degree of fear experienced by clients who have fled Taliban-controlled areas of Afghanistan over the past 20 years.

Jamie Bell, an immigration lawyer with the law firm Duncan Lewis, who has represented about 100 Afghan citizens claiming asylum, said those seeking refuge here had for years faced a “lengthy uphill battle to be recognised as refugees”.

Until 2016, the Home Office was operating monthly charter flights to return refused asylum seekers to Afghanistan en masse; more recently the UK government has continued to return people whose refugee claims have been rejected to Kabul on commercial flights.

“For years, Afghans have fled their home country seeking refuge in the UK only to be disbelieved, detained and forcibly returned to the warzone that they left behind. My hope now is that the culture of disbelief and disinterest towards Afghan asylum seekers becomes a thing of the past and the thousands seeking protection in the UK already are given the support and protection that they deserve,” Bell said.

Although there is a determination to welcome any scheme designed to offer asylum to people whose lives have been upended by the situation in Afghanistan, lawyers, charity workers and immigration experts stress that a new policy for Afghan asylum seekers will need to be combined with a radical rethinking of proposed new immigration legislation.

There is particular concern about aspects of the nationality and borders bill, which is designed to penalise refugees who have been forced (in the absence of safe, legal alternatives) to make their way into this country through irregular routes – most recently on boats across the Channel.

Beth Gardiner-Smith, of Safe Passage, a charity helping unaccompanied child refugees access legal rights, said: “The government cannot in all conscience talk about a compassionate response, while continuing to push through immigration legislation that punishes those refugees, many of them from Afghanistan, who come into this country through irregular routes. The reality is, even with an expanded resettlement programme, most Afghan refugees will still not have access to the official programmes.”

The Syrian vulnerable person’s resettlement scheme set out to resettle 20,000 Syrians in need of protection by 2020, was administered by the UNHCR, and has been broadly viewed positively by immigration experts. There has been speculation that a new scheme could be similar in scale, but with the UNHCR warning that there could be up to 3 million internally displaced people in Afghanistan, a figure that has increased by up to 500,000 since the beginning of this year, pressure for places on any scheme will be intense.

Any new government scheme to resettle Afghan refugees would need to commit to firm targets for the number of people to be helped, to avoid the risk of dwindling political willingness to fulfil commitments, once the crisis has passed. Campaigners remember how a government promise to support 3,000 unaccompanied refugee children in Calais 2016, many of them from Afghanistan, ended up only helping about 380.

Several charities stressed that there needed to be wholesale cultural change within the Home Office departments assessing Afghan asylum claims, pointing to a historical absence of compassion, which has led to so many young Afghan asylum seekers – who studied for their GCSEs in British schools – being removed from the country when they become adults.

Between 2009 and 2015, the Home Office deported 605 Afghans who arrived in the UK as unaccompanied minors. The approach toward Afghan asylum seekers was particularly tough; in the same period, only 6% of unaccompanied Afghan children were given refugee status, compared with 15% of other child asylum seekers.

Bella Sankey, the director of Detention Action, which has assisted large numbers of Afghan asylum seekers held in immigration removal centres over the past two decades, said: “The UK government has forcibly removed thousands of Afghan asylum seekers to danger over the past 20 years. It must now urgently step up, bring these people back and create a generous resettlement scheme for those most at risk from Taliban brutality.”
#Dominic Raab  #Afghanistan  #Raab
Add Comment