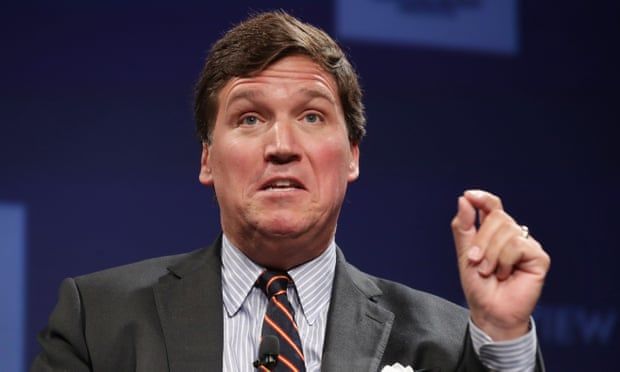 Why do Putin, Trump, Tucker Carlson and the Republican party sound so alike?

Putin’s lies, and the lies coming from America’s extreme right, are mutually supporting. There’s a reason for that
In a speech delivered last Friday from his office in the Kremlin, Putin criticized the west’s “cancel culture”, which, he charged, is “canceling” Russia – “an entire thousand-year-old country, our people”. It was the third time in recent months Putin has blasted the so-called “cancel culture”.

Which is exactly what Trump, Tucker Carlson, and the Republican party have blasted for several years.

“The goal of cancel culture is to make decent Americans live in fear of being fired, expelled, shamed, humiliated and driven from society as we know it,” Trump said as he accepted his party’s nomination at the Republican National Convention in 2020.

Tucker Carlson, one of Fox News’s most prominent personalities, has charged that liberals have been trying to cancel everything from Space Jam to the Fourth of July.

Putin’s fixation on transgender and gay people has also been echoed on the American right. Republican state bills aimed at limiting LGBTQ rights or discussion in schools are soaring. Last fall – months before Texas’s Republican governor Greg Abbott threatened to criminalize parents who give their transgender children gender-affirming care – Putin argued that teaching children about different gender identities was “on the verge of a crime against humanity”.

Then there’s admiration for Putin himself. Just before Putin ordered a full-scale invasion of Ukraine, Trump deemed him “savvy”, “genius”, and “smart” for “taking over a country, literally, a vast, vast, location, a great piece of land with a lot of people, and just walking right in”.

On his Fox News program, Carlson asked, rhetorically: “Why do I hate Putin so much? Has Putin ever called me a racist? Has he threatened to get me fired for disagreeing with him?” But Carlson called Ukraine “an obedient puppet of the Biden state department” and suggests Putin’s invasion was nothing more than a “border dispute”.

To conclude from all of this that authoritarians think alike is to miss a deeper truth. Putin, Trump, Carlson, and a growing number of rightwing commentators and activists, have been promoting much the same narrative – for much the same reason.

Remember, Putin was put into power by a Russian oligarchy made fabulously rich by siphoning off the wealth of the former Soviet Union. Likewise, Trump and the radical right in America have been bankrolled by an American oligarchy – Rupert Murdoch, Charles Koch, Rebekah Mercer (daughter of hedge fund tycoon Robert Mercer), Blackstone chief executive Stephen Schwarzman, and other billionaires.

In both cases, strongmen and their allies have mythologized a “superior” culture (replete with creation stories of blood ties, motherlands, and religion) supposedly endangered by decadent forces intent on attacking and overwhelming it.

To Putin, the decadent force is the west. As he put it Friday, “domestic culture at all times protected the identity of Russia”, which “accepted all the best and creative, but rejected the deceitful and fleeting, that which destroyed continuity of our spiritual values, moral principles and historical memory”. Hence, a mythic justification for taking Ukraine back from a seductive but inferior western culture that threatens to overwhelm it and Russia.

The Trump-Carlson-white nationalist narrative is similar: America’s dominant white Christian culture is endangered by Black people, immigrants and coastal elites who threaten to overwhelm it.

The culture wars now being orchestrated by the Republican party against transgender people, gay people, poor women seeking abortions, and schools that teach about sex and America’s history of racism, emerge from the same narrative as Putin’s culture war against a “decadent” West filled with “sociocultural disturbances.” As does the right’s claim that “secularists” have, in the words of former Trump attorney general William Barr, mounted “an unremitting assault on religion and traditional values”.

These tropes have served to distract attention from the systemic economic looting that oligarchs have been undertaking, leaving most people poor and anxious. Which is why the grievances that Putin, Trump, Carlson, and the Republican party use are unremittingly cultural; they are never economic, never about class, and most assuredly not about the predations of the super-rich.

Reduced to basics, today’s oligarchs and strongmen (along with their mouthpieces and lackeys) are trying to justify their wealth and power by attacking liberal values that have shaped the west, beginning with the enlightenment of the 17th and 18th centuries – the values of tolerance, openness, democracy, self-government, equal rights, and the rule of law. These values are incompatible with a society of oligarchs and strongmen.

Ultimately, the oligarchs and strongmen will lose. Putin won’t succeed in subduing Ukraine, Trump won’t be re-elected president, and Carlson and his ilk won’t persuade Americans to give up on American ideals. But the culture wars won’t end any time soon, because so much wealth and power have consolidated at the top of America, Russia, and elsewhere around the world that anti-liberal forces have risen to justify it.
#William Barr
Add Comment