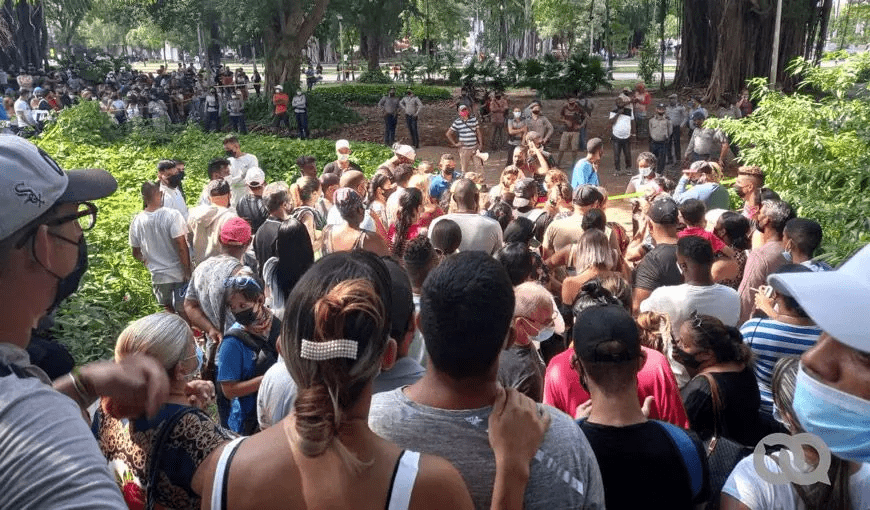 Why Did Cubans Protest Outside the Panama Embassy?

With rumors of the decree going around, a group of Cubans gathered outside the Panamanian Embassy early on March 9th, hoping for a response.

“Respect trips in March!”, hundreds of Cubans shouted on March 9th in Parque Miramar, in front of the Panama Embassy, after an official from the Embassy confirmed at 2:25 PM, that passengers with plane tickets between March 13th-30th will need to reschedule their journeys and apply for a transit visa.

“My flight is on the 27th. We’re not leaving here without a solution!” a young woman with her husband says.

This protest began when the Panamanian authorities approved a decree published in the Panama Republic’s Official Gazette on March 8, 2022, completely unannounced and coming into effect immediately for at least three months. It stipulates that any Cuban citizen or crew member needs a transit visa to stop over in this country, whether it’s to fly to another country or to return to Cuba. Applications for this visa must be made 15 days before the journey.

With rumors of the measure going around, a group of Cubans gathered outside the Embassy in the early hours of March 9th, hoping for a response to clarify their doubts about their chances of traveling.

But the Embassy’s response only came over seven hours later, with a large crowd of protestors gathered outside. A statement was read explaining that travelers with a layover in Panama will be able to travel up until Saturday 12th without a transit visa, if the layover is less than 12 hours in duration, while any Cuban with a flight scheduled after the 13th should apply for a visa as soon as possible and pay 50 USD for immigration purposes. 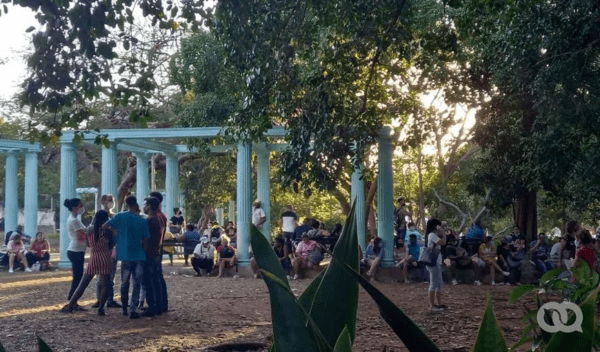 This decision calmed some people present with flights in the next fews days; but the only alternative offered to those who had already bought flights between March 13th-30th was to reschedule them. This news has come amidst a context of excessive demand for flights and the airline suspending new ticket sales from Cuba to other Central American countries, including Nicaragua, until further notice.

“I’ve had my flight booked since 2020; December 2020. COVID, COVID, COVID… and now this. Put yourself in my shoes. Respect us! If they want to charge me 50 USD, go ahead, they charge us here for even a smile nowadays, but let me fly. I’ve rescheduled the flight so many times that I don’t know if I’ll be able to do it again. If I can’t, they might give me my money back in national currency at the official 24 peso to 1 USD rate, and I paid for the flight in dollars. I’m not leaving here until they give me another option,” a woman with a flight on March 13th said, who kept repeating that “these flights are so, so expensive.”

While some people left with peace of mind because they don’t need a visa or because they still have time to apply for one, others remained demanding understanding given a decision that is not fair, even if it’s legal. Cubans who had everything set to travel after March 13th are asking for another solution that isn’t rescheduling their flight.

“Why do some of us have the chance to travel without a transit visa and not others? We’ve invested money and time into these plans. They’re asking for a visa from me when I’m only in Panama for an hour. Just an hour. I don’t care, I’ll pay the 50 USD, but don’t make me change the date,” adds another young woman just over 20 years old.

Since January 1st 2022, the Panamanian airline Copa has made 265 flights between Havana and Panama City, with 3-5 flights every day, according to information compiled by the DeFacto team. This figure allows us to estimate that over 10,000 Cubans could be affected by this decision.

“Not all of us are here in the park. There are people who still haven’t heard and those from the provinces aren’t here,” Yuniel adds, a man who came to the Embassy at 4 AM after reading this news on Facebook. “It’s not COVID-related or anything, it’s just to piss us off.” 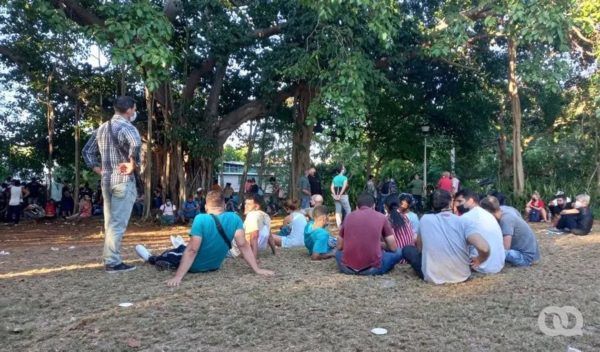 Panama is a key connection point for Cubans traveling to Latin America, especially to Nicaragua, which has waived visa requirements for Cubans, since November 2021. However, there are very few direct flights between Havana and Managua. Thousands of Cubans embark on the journey to the US southern border from this Central American country. Recent statistics from the Customs and Border Protection Department (CBP) reveal that during the first three months of this fiscal year, 20,476 Cubans entered the US via Mexico or other illegal routes, with a record number in December.

This decision could rake in over approximately two million USD for the Panamanian Government in just three months, given the current influx of travelers.

The Panamanian Government’s decree came after Costa Rica began to demand transit visas in mid-February 2022 and Colombia announced that it would not accept new transit applications, at least for a while.

Up until now, Copa has only announced that people with multiple-entry visas or permanent residency in Canada, the US, Korea, Japan, the UK and Northern Island will be exempt from this immigration policy, as long as the visa for these countries has been previously used and they are in possession of passports that are valid for six months beyond their entry in Panama.

The airline also stated in this document that, given this situation, “it will be flexible for passengers who need to change their travel plans in order to meet the new requirements.”

However, the note doesn’t explain what “being flexible” means or any additional information about how Cubans can reschedule their flights, flight availability, whether these passengers will be given priority, what the reimbursement process will be for those who decide not to fly via this route, whether there will be a discount and what currency reimbursements will be made in.

“Copa doesn’t have the capacity. There are people with family in the US who have spoken to the airline and said they haven’t been able to reschedule anything. Everyone is wiping their hands clean of it, but we’re here stuck in the middle,” a man shouts helplessly. It’s impossible to get in contact with the airline from Havana. 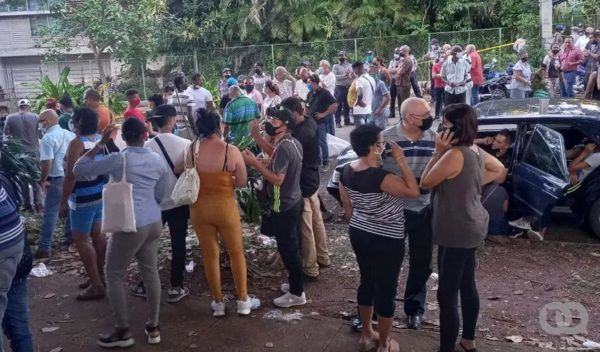 At 6:30 PM, the Embassy issued a second statement. Tired and scattered all over the park, people gathered again. The official stood behind the police cordon that protects the Embassy’s perimeter, which is behind yellow tape too.

With a piece of paper in his hand, he apologized for the inconvenience and through a loudspeaker confirmed what had been said hours ago, using the same words: “People who have plane tickets between March 13th-30th will need to reschedule their flight.”

These passengers haven’t been given any other options that respect their money, time and plans, up until now. They’re still holding onto hope though.