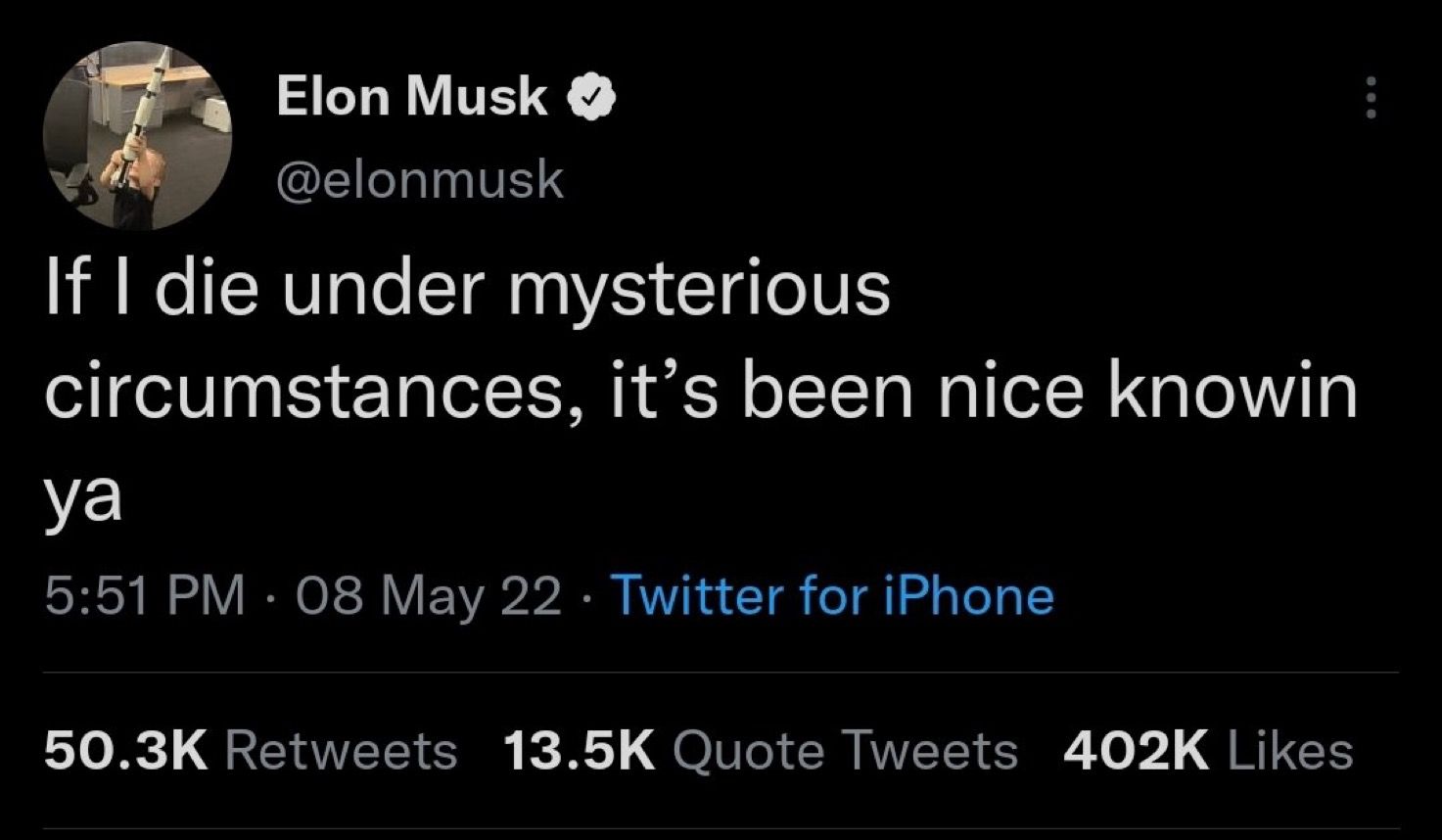 Who is threatening Elon Musk's life?

Elon Musk Tweeted today: “If I die under mysterious circumstances, it’s been nice knowin' ya”
As we all know, Musk's acquisition of Twitter threatens the Democratic Party's chances of winning future elections, because Mr. Musk intends to allow freedom of reliable information and freedom of legitimate expression, instead of the current Big Tech policy, to ban statements that may support Republicans or expose Democrats' corruption.

The hysteria that the purchase of Twitter by the billionaire, who is in favour of democracy, has provoked quite aggressive reactions, including an attempt to use regulatory tricks and all sorts of bureaucratic tactics to block the purchase of Twitter by Musk, to thwart his plan to give America back the freedom of legitimate expression and freedom of reliable information it lost.

Now the hysteria seems to be escalating, shifting to threats on Musk's life.

This is especially worrying because the freedom of information that Musk "threatens" to bring back to America, is linked to the very same tycoons who perpetrated the perfect assassination of Jeffrey Epstein.

His tweet from today must arouse concern among all those for whom democracy, freedom of expression and freedom of information are considered important principles.
#Elon Musk

Treetopflyer 258 days ago
Me thinks this where the current regime went behind the curtain...

Treetopflyer 258 days ago
Look to The Creature from Jekyll Island aka The Federal Reserve, created by the people it was created to protect us from, the Carnegie's, the Rockefellers and the Rothschild's...

To Oh Ya 264 days ago
Oh Ya, you concentrate on the controversial argument, and miss the point.

The Democrats' technique for gaining masses of primitive voters is ingenious. The feelings of inferiority of the primitive voters is the secret. A person who is uneducated, or poor, or has complexes because of his origin, race, or social affiliation, needs compliments that will lift his ego from the low point in which he is buried. In a technique invented by Goebbels (Hitler's propaganda minister) the left brands itself as enlightened, liberal, as a democrat, as educated, as modern, as advanced, and the other side as primitive, inferior, uneducated, unvalued, and so on.

Now it is up to a person who is really inferior for some reason, to choose. Does he want to belong to someone who is branded as an inferior person, or to someone who is branded as an intellectual, cultural and social elite. And so all the poor of life are proud of the fact that they belong to a camp that actually despises them, despises them and is disgusted with them.

As we see in practice, the actions and not the speeches of the left camp, they oppose freedom of expression, in favor of wars, restrict the freedom of the press, and act to delegitimize tens of millions of decent citizens whose every sin is that they voted in elections to someone else.

The left is not and the democratic is not. Enlightened it is not and tolerant it is not. Liberal is not, and modern is not. The content is completely inverted from the cover.

Oh ya 264 days ago
Being a Democrat is a mental illness. Since the days of them being the slave owners they have wanted to control everyone. Hard to believe that blacks would vote for their ancestors slave owners
View all comments (4)Add comment