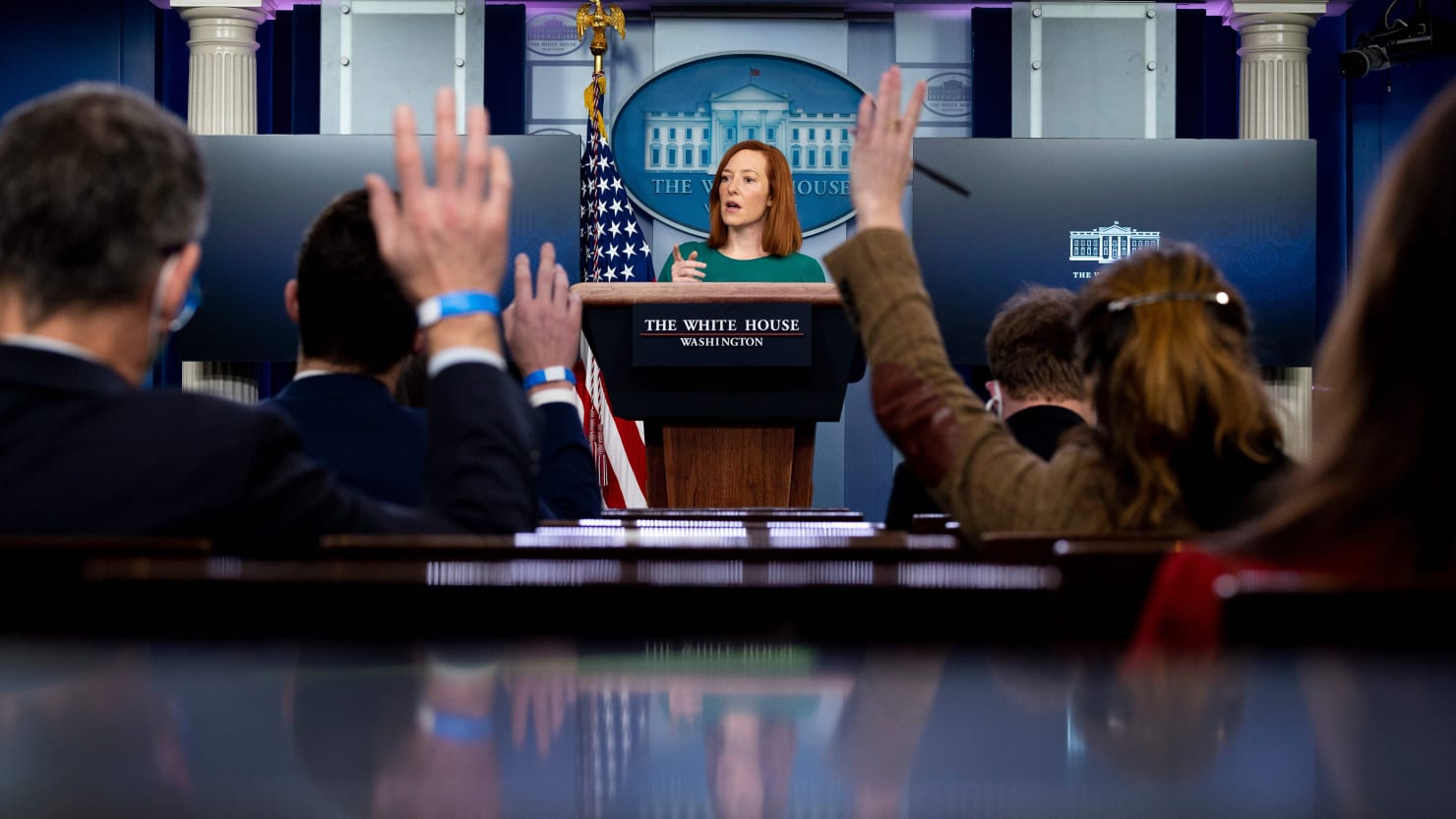 Biden administration adopted the practice that is used by the Kremlin. “It pissed off enough reporters for people to flag it” for the White House Correspondents’ Association, one of The Daily Beast’s sources said.

If you’re a reporter with a tough question for the White House press secretary, Joe Biden’s staff wouldn’t mind knowing about it in advance.

According to three sources with knowledge of the matter, as well as written communications reviewed by The Daily Beast, the new president’s communications staff have already on occasion probed reporters to see what questions they plan on asking new White House Press Secretary Jen Psaki when called upon during briefings.

The requests prompted concerns among the White House press corps, whose members, like many reporters, are sensitive to the perception that they are coordinating with political communications staffers.

One reporter raised the issue during an informal White House Correspondents Association Zoom call last Friday. According to multiple sources, leaders at the meeting advised print reporters to push back against requests by the White House press team to learn of questions in advance, or simply to not respond to the Biden team’s inquiries.

“While it’s a relief to see briefings return, particularly with a commitment to factual information, the press can't really do its job in the briefing room if the White House is picking and choosing the questions they want,” one White House correspondent said. “That's not really a free press at all.”

“It pissed off enough reporters for people to flag it for the [WHCA] for them to deal with it,” another knowledgeable source said.

The WHCA Zoom call was off the record, and Daily Beast staffers participated in the talk. Those staffers had no input into this story whatsoever. The reporter who wrote this story was not bound by the terms of the call’s agreement. All of the information in this article was independently gathered, and without his colleagues’ knowledge.

Since Biden took office two weeks ago, the White House press team has visibly attempted to draw contrasts with the Trump press team, which had a notoriously antagonistic relationship with reporters and eventually scrapped the traditional daily briefing altogether.

Psaki has pleased many members of the press pool by ensuring that the reporters in attendance aren’t doing so in vain. In each of the early press conferences, she’s fielded questions from every reporter in the room.

During her first presser, Psaki promised to restore regular briefings, including those with top administration health officials, adding that she had a “deep respect for the role of a free and independent press,” and that they shared “a common goal, which is sharing accurate information with the American people.”

Biden’s press team did not deny that staffers had solicited questions from reporters. But the White House contended that it has tried to foster a better relationship with the press corps than the previous administration, and has tried to reach out to reporters directly in order to avoid appearing to dodge questions during briefings.

“Our goal is to make the daily briefing as useful and informative as possible for both reporters and the public,” a White House spokesperson said. “Part of meeting that objective means regularly engaging with the reporters who will be in the briefing room to understand how the White House can be most helpful in getting them the information they need. That two-way conversation is an important part of keeping the American people updated about how government is serving them.”

This practice isn’t totally unheard-of in previous administrations, departments, or federal agencies. For instance, former President Donald Trump’s White House Press Secretary Sarah Huckabee Sanders was known to have asked certain news outlets about their questions in advance of some major or high-profile Trump press conferences or events, according to two people with direct knowledge of the matter. Communications staffers during the Bush and Obama years would ask reporters for the gist of questions in advance if they wanted to interview Cabinet secretaries.

Under previous administrations, many White House reporters would meet informally in the morning for gaggles with the press secretaries. During these interactions, White House communications staff could get a sense of the topics reporters were interested in that day, and would come prepared for questions during televised briefings later in the afternoon.

Eric Schultz, a former deputy press secretary in the Obama White House, said that the new comms team was restoring normalcy to the briefing process. Finding out what reporters are focusing on, he said, was standard procedure in most pre-Trump White Houses in order to reduce the number of questions that go unanswered during televised briefings.

“This is textbook communications work. The briefing becomes meaningless if the press secretary has to repeatedly punt questions, instead of coming equipped to discuss what journalists are reporting on,” he said. “In a non-covid environment, this would happen in casual conversations throughout the day in lower and upper press. One of the few upsides to reporters hovering over your desk all day, is that you get a very quick sense of what they’re working on.”

Despite concerns some reporters had with the Biden team’s behind-the-scenes queries, Psaki’s tenure thus far has received positive reviews from many media outlets. The Washington Post told readers to get ready for a “reality-grounded” press briefings, which Forbes has already described as “must-see TV.” The New York Times noted that she had extended an “olive branch” to reporters during her first briefing, which Vox described as a “breath of fresh air.”

Oh ya 27 days ago
Well from china joe and the ho it seems the whole bunch of them do not know anything. You dems must be so proud
View all comments (1)Add comment