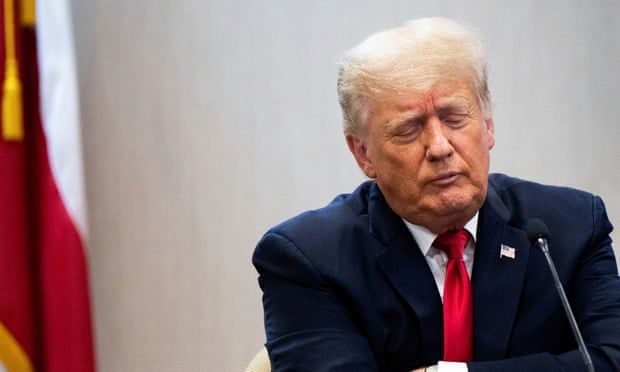 What does it mean to ‘plead the fifth’ – and will Donald Trump do it?

The ex-president has been ordered to testify in a New York fraud case. Will he invoke his constitutional right to remain silent?

Donald Trump and his two eldest children have been ordered by a New York judge to appear for a deposition within 21 days, as part of an investigation into the Trump family finances. The development presents the former US president with a dilemma: should he invoke his right to silence by pleading the fifth?

What does ‘pleading the fifth’ mean?

The right of any person to decline to answer questions put to them in criminal proceedings flows from the fifth amendment of the US constitution (hence “pleading the fifth”). The amendment, dating back to 1791, protects individuals from self-incrimination. “Nor shall any person be compelled in any criminal case to be a witness against himself,” it says.

Technically, the financial investigation into the alleged fraudulent accounting of the Trump Organization is being conducted by Letitia James, the New York state attorney general, as a civil case, and as such is not covered by the right to silence. There is a complication, though – James has made clear that she is working in unison with the Manhattan district attorney Alvin Bragg, who is also looking into Trump finances but as a criminal matter.

On Thursday, hours before Judge Arthur Engoron ruled that Trump and his children Donald Jr and Ivanka had to present themselves for questioning, the former president’s lawyers protested that he was being put in an impossible bind.

Alina Habba, one of Trump’s legal team, told the court: “They either disclose evidence in a civil investigation or they have to invoke the constitutional right not to testify, thereby triggering an adverse inference in the civil action. How is that fair, your honour?”

Does pleading the fifth imply the witness is guilty?

In law, not at all. US law could not be clearer. Invoking your right not to answer a question in a criminal case says nothing about your guilt, and no inference may be drawn from it.

The supreme court has underlined that point several times. For instance, in the 2001 ruling Ohio v Reiner, the justices stated that “one of the fifth amendment’s basic functions is to protect innocent persons who might otherwise be ensnared by ambiguous circumstances”.

Of course, what the law says is not the end of the calculation. Witnesses have to weigh up how a jury might respond were the case to go to civil trial, as Trump’s might. If you are a politician like Trump, there is also the vexed issue of public opinion.

Could Trump family members plead the fifth when they face James in the next few weeks?

Absolutely. There is a track record for this. Trump’s younger son Eric, the executive vice-president of the Trump Organization, has already been called before the James inquiry to answer questions about whether the family business misleadingly or fraudulently valued its assets to secure loans or pay lower taxes.

What is Trump’s take on this?

To plead or not to plead the fifth is an especially fraught question for the former president. His lawyers know that he has a tendency to wander off script, which may be fine at a campaign rally surrounded by supporters but is not a good idea if you are facing a dagger-sharp inquisitor like James.

Trump has invoked his fifth amendment rights in the past. The investigative reporter Wayne Barrett chronicled how in 1990 Trump declined to answer 97 questions, many about adultery, during his bitter divorce from his first wife, Ivana Trump.

On the other hand, remaining silent could make him look weak and hypocritical. Trump has gone on the record several times denouncing those who invoke their fifth amendment rights.

At a campaign stop in Iowa during the 2016 presidential race, he said: “The mob takes the fifth. If you’re innocent, why are you taking the fifth amendment?”

In 2014, he offered the disgraced comic Bill Cosby “some free advice” in a tweet. He said: “If you are innocent, do not remain silent. You look guilty as hell!”