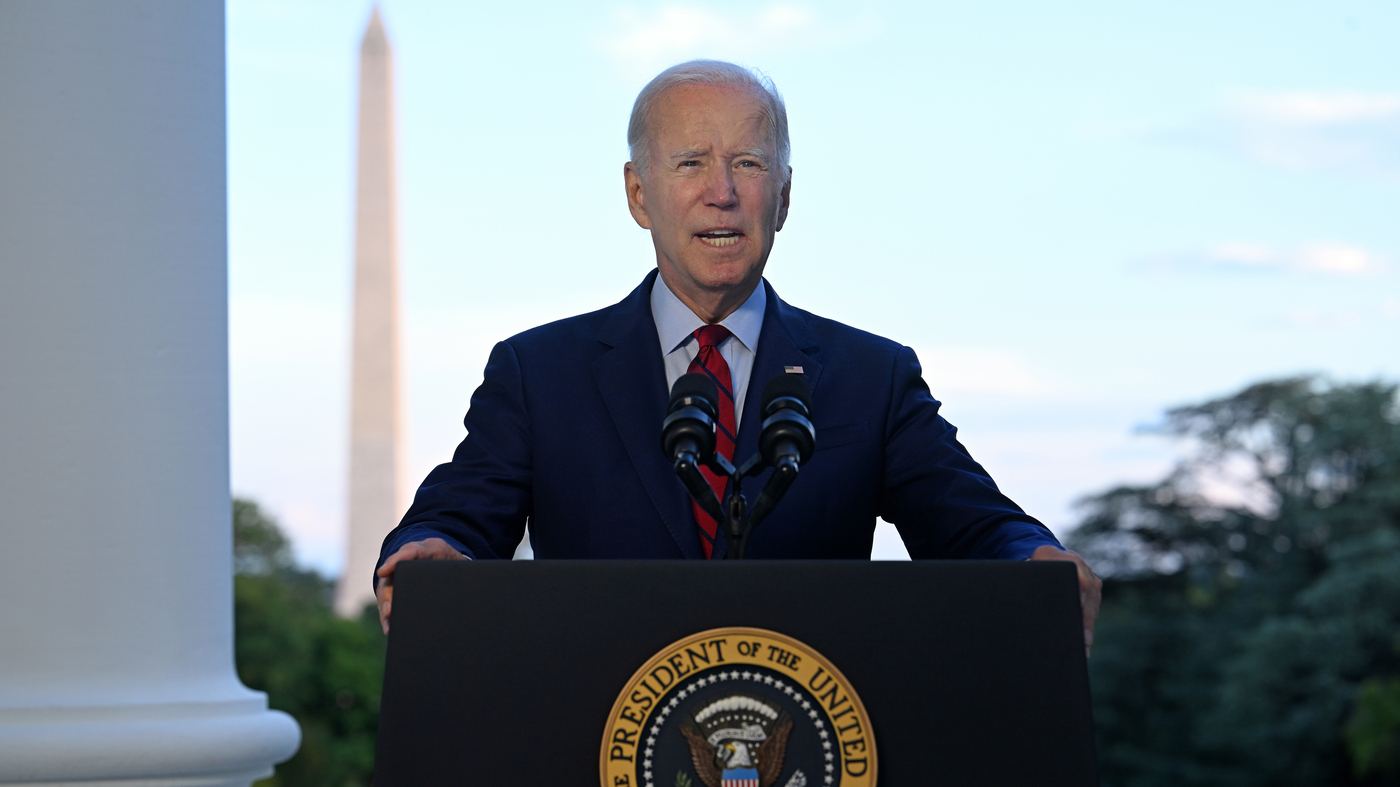 It's been a busy few weeks for President Biden. Despite a rebounding case of COVID, he has been able to tout the killing of al-Qaida's top leader, falling gas prices, the passage of a major domestic manufacturing bill and Congress being on the cusp of finally passing a landmark health care, tax and climate package.

Those victories are coming at a crucial moment, with the November midterm elections fast approaching and Biden's approval rates at an all-time low.

An NPR/PBS NewsHour/Marist poll released in mid-July put Biden's approval rate at 36%. And it attributed that record low to a drop in support from Biden's own party, with a relatively low 75% of Democrats saying they approve of the job he is doing (for comparison, former President Donald Trump's approval within his party was never that low).

Could this recent string of wins change how Democrats feel about the president, and what they consider their options ahead of the midterms?

While midterms are typically historically difficult for whichever party controls the White House, LaBolt says that these tangible results and momentum in Congress are showing people that their votes mattered, and could help shift perceptions of the president and congressional Democrats.

Huntley agrees that this is a "real vivid, galvanizing moment" for many people. And he believes that others will be motivated to cast their votes not by the Democrats' success but by the threat of Republican control of Congress.

"Even though there are a lot of people who want to see the president and the administration go further on climate, go further on student debt, go further on voting rights, go further on justice. ... I think folks understand the urgency of this moment and that if we lose these key, key state races, it's a slippery slope," Huntley says.

What could Biden do to galvanize voters ahead of the midterms?

"A lot of folks, the progressive folks, are saying, 'Look, we need to do more to address the human infrastructure needs of our nation,' " Huntley says. "We have to invest in America's most valuable resource, its people."

That could include more investments in child nutrition, tuition-free community college, paid family and medical leave and other initiatives that Biden promised and championed at the start of his administration.

For example, many young voters are frustrated that Biden has not made good on his campaign pledge to forgive at least a portion of student loan debt — something that Huntley points out disproportionately impacts people of color and has "crushed an entire generation."

LaBolt says he understands why some Democrats are feeling frustrated or apathetic, having delivered votes in record numbers only to see campaign pledges go unfulfilled. But he encourages them to celebrate other wins, like Congress confirming a record number of judges and advancing major climate and health care legislation.

"A lot of these were listed as priorities during the Democratic primary, when a certain subset of America was debating what the most important issues were to them," LaBolt says of those campaign promises. "Well, the American people today, the broad electorate, are telling us that the cost of living matters most to them. And that's exactly where the president and Congress are focused today."

Given these accomplishments, Khalid asks, why is it that so many Americans don't want Biden to run for president again? A CNN poll released last week, for example, found that 75% of Democrats and Democratic-leaning voters want the party to nominate someone else.

Huntley acknowledges that the political process moves slower than many people would like, but encourages them to focus on the issues at stake, like freedoms that are at risk.

LaBolt agrees, adding the focus should be on the midterms of 2022, not on the presidential election of 2024.

"People love to focus on presidential elections because it's the highest-profile form of politics that we practice," he says. "But there are plenty of presidents from President Obama to President Clinton that got through tough midterm elections. And then when the American people were presented with the alternative, which was Republican control of Congress, they realized that's not something that they wanted and that Republicans weren't focused on their priorities."

How can Biden take bold action without being divisive?

LaBolt says it's more so a question of where Biden channels his political energy to get the most effective outcomes, given the constraints (for example, that two Democratic senators don't support changing the filibuster).

Despite those challenges, LaBolt says Biden has been taking action where he can, like addressing voting rights through the Justice Department and moving toward taking climate action through the Environmental Protection Agency.

"This is a president who has worked in government nearly his entire career," LaBolt says. "He understands that Congress has some levers to pull. The executive has some levers to pull. The levers that the executive pulls are constrained by what the courts will do with those executive actions. And so I think they've studied very closely what executive actions they can take, where they can be effective in a way that it won't be tossed out by the courts, but continue to show momentum on these important priorities."

At the end of the day, given Biden's platform and track record, Huntley says there are "only so many different ways in which he's going to approach embracing progressive policy." That makes it even more important for voters to speak up, he adds.

"It's on us, I believe, to make sure that we hold our leaders accountable ... so that when we do make a stand for student debt cancellation, when we do call for advances in health care, when we do call for more robust investments in climate change, there's a cloud of witnesses that join us and it's not seen as a minority idea," Huntley says. "It's seen as what the will of the people is."