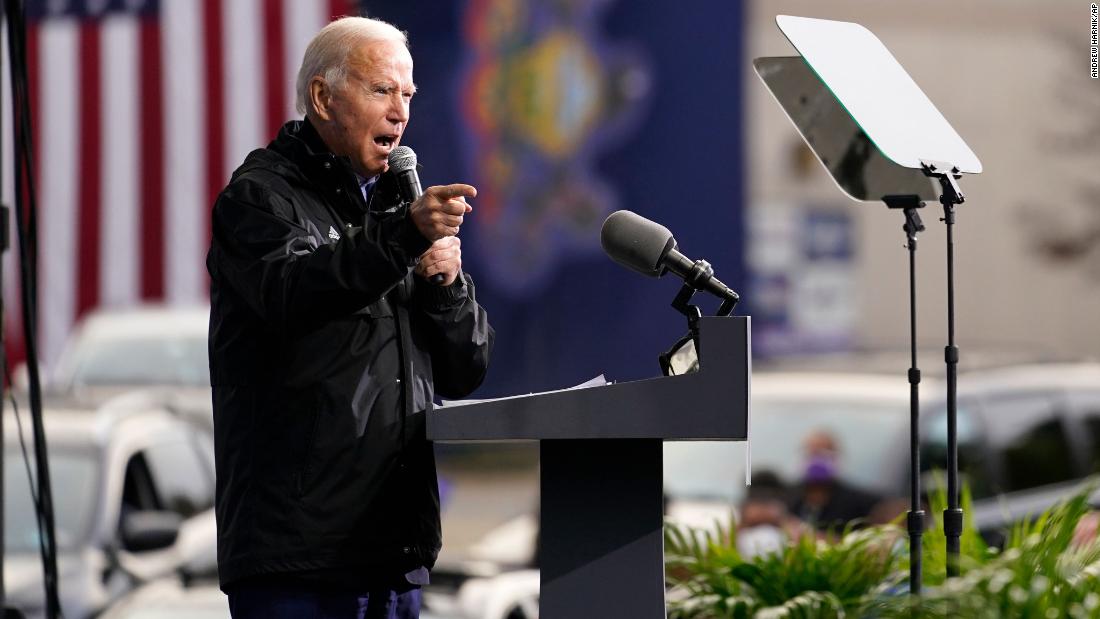 What a Biden victory could mean for energy, health care and tech stocks

Heading into Election Day, former Vice President Joe Biden is the clear frontrunner in the race for the White House. If he wins, and Democrats retake control of the Senate, a growing chorus of Wall Street analysts think markets could benefit.

"If there is Blue Wave, that might initially lead to some weakness, as investors would worry about the swing to market-unfriendly policies," Mislav Matejka, head of global and European equity strategy at JPMorgan, told clients Monday. "But we believe that this too will be an opportunity to [buy stocks], as the fiscal support will likely be ramped up significantly."

Despite expectations for fresh stimulus, some sectors could be more sensitive to a Biden win. Among Biden's campaign promises are pledges to build a greener economy, expand government-backed health care and raise taxes on corporations. Should he follow through, energy, health care and tech companies could face greater pressure.

* Oil companies have had a cheerleader in the White House for the past four years. That would change under Biden. "A Biden victory would continue a significant sentiment shift away from energy investments," Mills said. But he expects any attempts to move energy production and consumption away from fossil fuels would likely involve more carrots than sticks, limiting policy-related damage to stocks.

* Hospitals could take a hit if Biden is successful in expanding the number of people on government health care, since reimbursements for procedures tend to be higher for people with private insurance.

* Big tech companies have been a bogeyman for both Democrats and Republicans in recent years. But under Biden, tax policy could pose a real threat to earnings, given his plan to ensure no large company gets away without paying taxes of at least 15%. Biden may also not be as strongly opposed to new digital services taxes on firms like Google and Amazon.

Much could depend on who Biden picks to fill key positions in his administration.

"Overall, personnel is policy," Mills said. Installing a tougher head of the Consumer Financial Protection Bureau, for example, could lead to greater penalties for misbehaving banks.

Remember: Broadly speaking, long-term stock performance is more closely tied to the ups and downs of the business cycle than any election.

"What is known today is we are on the cusp of a new business cycle. Corporate revenue is improving and [interest rates] are going to stay low for a long time," Deepak Puri, Americas chief investment officer at Deutsche Bank Wealth Management, told me.

While the trajectory of Covid-19 remains a huge risk, those conditions will likely remain the driving force for financial assets — not who wins the presidency, Puri said.

After all, energy stocks have crashed since Trump took over, as investor interest in oil and gas companies waned and the pandemic destroyed demand. The iShares US Energy ETF has plunged nearly 60% since the 2016 election.

"The energy conversation is really more about the strength of the economy," Mills said.

Stocks are jumping, but watch oil

Stocks are gaining Monday after wrapping up their worst week since March. But in the coming days, don't expect markets to move in one direction.

Catch up: Election jitters and new lockdown measures announced in France and Germany sent stocks down sharply last week. The Dow fell 6.5%, while the S&P 500 dropped 5.6%. The Nasdaq Composite shed 5.5%.

Investors are starting off the week on a more positive note. European stocks and US futures are higher, even though a new stay-at-home order was announced in England over the weekend.

Oil prices tell a different story, however. Brent crude futures, the global benchmark, dipped another 2.3% Monday to roughly $37 per barrel.

Prices haven't been so low since May, when strict quarantines were still in force in many top economies, causing thirst for oil to dry up.

"With coronavirus cases rising and renewed lockdown measures coming in, driving statistics have started to decline again and commercial aviation does not seem to be improving anymore," Morgan Stanley analysts Martijn Rats and Amy Sergeant said in a recent note to clients.

Inventories of crude remain "stubbornly high," they added. That leaves little room to deal with another plunge in demand.

What it means: Even if stocks are resilient, oil prices indicate that concerns about the fate of the economic recovery could dog markets in the coming weeks.

Economists fear that Europe's economy could contract in the fourth quarter. Despite record GDP growth in the third quarter, the EU economy remains about 4% smaller than it was at the end of September last year.

With the US presidential election just one day away, the stock market has locked in its prediction about the victor — at least according to one indicator, my CNN Business colleague David Goldman reports.

The S&P 500 fell 0.04% between July 31 and Oct. 31. That means the market forecasts by a hair that Biden will win, according to CFRA Research's Presidential Predictor.

The stock market has a fairly reliable track record: Since World War II, when the S&P 500 fell in the three months leading up to the November vote during a presidential election year, the incumbent president or party of the outgoing president has lost the election 88% of the time.

When the S&P 500 rises during that period, the incumbent or party of the outgoing president has won 82% of the time.

The stock market had been predicting a Trump victory until Friday, when the S&P 500 tumbled 1.2%. That was just enough to send stocks into the red over the past three months, giving the razor-thin edge to Biden.

"This year, the Predictor closed ever so slightly in the red during this three-month period, implying, but not guaranteeing, that Biden will emerge victorious," said Sam Stovall, CFRA's chief investment strategist.

Coming tomorrow: Check your inbox for another special edition of Before the Bell, just in time for Election Day in America.