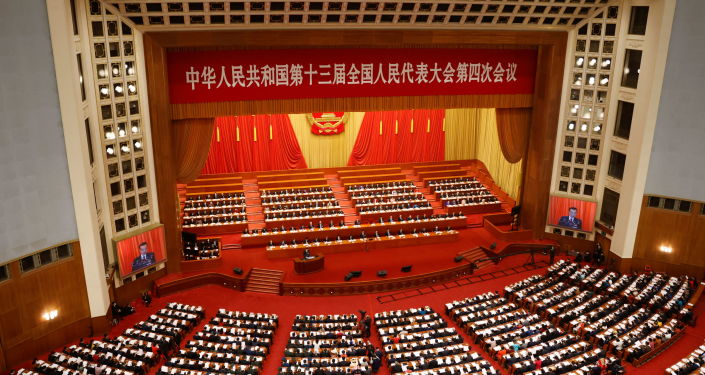 Chinese regulators have gradually worked to close taxation loopholes and improve regulatory regimes in recent years, particularly amid the continued escalation of tensions with the United States, which has engaged the fledgling economic superpower in a trade and tech war worth hundreds of billions of dollars.

Business media in the US and the UK are up in arms over the Chinese government’s recently unveiled plan to strengthen regulatory control on key strategic sectors of the economy, including technology, healthcare, food production and pharmaceuticals.

On Wednesday, Xinhua published guidelines approved by the State Council (i.e. the cabinet) and the Central Committee of China’s ruling Communist Party "On the Implementation of the Construction of a Government Under the Rule of Law (2021-2025).”

The document, to be implemented by all regions and government departments, outlines a series of steps to "dramatically" improve administration, clearly delineate administrative power, optimise state agency functions, speed up the construction of a “service-oriented government,” and “continue to optimise a business environment governed by law.” The “people-centred” approach is said to be guided by China’s socialist system and Xi Jinping Thought on Socialism With Chinese Characteristics for a New Era.

Among other things, the document calls for the creation of “a stable, fair, transparent and predictable business environment under the rule of law,” including the protection of property rights and independent management of enterprises, as well as rules to “prevent abuse of administrative power to eliminate and restrict competition.”

It also pushes for the acceleration of “the construction of credibility in government affairs,” including by creating and working to improve accountability “for government dishonesty, increasing the punishment for dishonesty, and focusing on dishonest behaviours in areas such as debt financing, government procurement, bidding and investment promotion.”

The strategy hopes to achieve its aims in part through the use of technology, including the continued digitisation of administration using the internet, big data, AI, and technology-aided legal enforcement (i.e. things like remote monitoring), plus the creation of a new national administrative law enforcement database.

Overall, the document is in line with Xi Jingping’s reforms since coming to power in 2012 to gradually reverse and reduce China’s economic dependence on the West, to “realise socialist modernisation and national rejuvenation” and to improve “law-based governance.”

However, Western media expressed alarm over the strategy, characterising it as Beijing’s latest attempt to “crack down on business.”

In its piece on the five-year plan, the Financial Times suggested that it constitutes an attempt by the Communist Party to assert “supremacy over the world’s second-largest economy,” with the new measures on oversight described as the “latest step of regulatory assault.”

Meanwhile, Bloomberg warned that the new “five-year blueprint calling for greater regulation of vast parts of the economy” has “left investors reeling” and provides “a sweeping framework for the broader crackdown on key industries.”

Bloomberg complained that investors in China have already been “seeking to make sense of a regulatory onslaught” taking place in recent months, “particularly after authorities banned profits in the $100 billion after-school tutoring sector.”

The business newspaper pointed out that the last year has seen anti-monopoly probes on the country’s tech giants, including Alibaba Group (which was fined $2.8 billion in April for abusing its market position), and mandating cybersecurity reviews for foreign listed companies.

BBC Business entitled its piece on the plan “China says crackdown on business to go on for years,” and similarly complained that shares in Chinese companies listed on US, Hong Kong and the Chinese mainland stock markets have already “fallen sharply this year as investors’ concerns grow over the crackdown.”

Bruce Pang, head of research at China Renaissance, a major investment bank and advisory, was less alarmist in his assessment of Beijing’s rule of law reforms, telling FT that “regulatory agencies in China will continue to scrutinise companies in internet and technology-related sectors on a range of issues, such as overseas listings, data security, consumer privacy, anti-competitive practices and merger irregularities.”

“Policymakers would like to address and resolve social issues effectively and efficiently to ensure social fairness, justice, equality and national safety as well as preventing risks,” Pang added.

The "rule of law" five-year plan shouldn’t be confused with China’s national Five-Year Plan – a comprehensive planning document which outlines the country’s economic development strategy for the years 2021-2025. That plan was approved during a plenum of the Central Committee in October 2020, and included the goal of turning China into a “moderately developed” economy by the year 2035, with a per capita GDP of about $30,000. The plan also includes support for the continued implementation of China’s ambitious global Belt and Road infrastructure strategy, green energy initiatives to reduce carbon emissions and increase hybrid vehicle production, and measures to enhance the country’s scientific and capabilities and spending on research and development, both via economic directives and tax incentives.