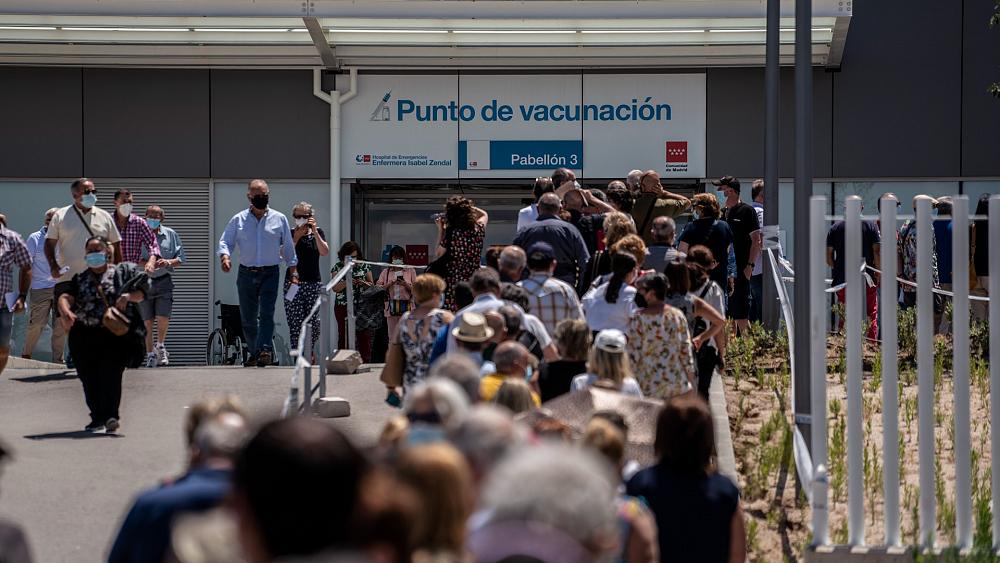 'We've delivered': 70% of EU adults have one vaccination, says VDL

The target of 70% of EU adults having at least one vaccination has been reached. And a total of 57% of people aged 18 and over are fully vaccinated against COVID-19 across the EU. #BrusselsBureau
Seventy percent of adults in the European Union have received at least one shot of the COVID-19 vaccines, Commission chief Ursula von der Leyen announced on Tuesday.

"The EU has kept its word and delivered. Our target was to protect 70% of adults in the European Union with at least one vaccination in July. Today we have achieved this target," von der Leyen said in a statement.

The proportion of people aged 18 and over having been fully inoculated in the bloc now stands at 57%, she added.

"These figures put Europe among the world leaders. The catch-up process has been very successful — but we need to keep up the effort," she went on, warning that "the Delta variant is very dangerous."

Currently, 60% of American adults have been fully vaccinated with 69% having been administered at least one dose. In the UK, these figures stand at 70.5% and 88.1%.

Most European countries have seen a surge in new cases in recent weeks, blamed on the Delta variant although hospitalisations and deaths have remained well below peaks observed over the winter, in large part due to the vaccination uptake.

The European office of the World Health Organisation (WHO) and the European Centre for Disease Prevention and Control (ECDC) said that week that the Delta variant, which first originated in India, is now dominant in 19 of the region's 28 countries which reported sequencing information.

In these countries, the Delta variant, which has been found to be more transmissible than the original strain of the virus and the Alpha variant, account for an average of 68.3% of all new cases.

“We are far from out of the woods in terms of the pandemic ending and sadly in many countries in our region we’re seeing a significant rise in cases associated with the spread of the highly transmissible Delta variant," Dr Hans Henri P. Kluge, WHO Europe’s Regional Director, said then.

"Despite tremendous efforts by Member States to vaccinate people across the region, millions more remain unvaccinated and therefore at risk of ending up in hospital.

“The good news is that the data clearly shows that receiving a full vaccination series significantly reduces the risk of severe disease and death. When called to do so, people should get vaccinated," he also said.
#Vaccines  #COVID-19  #Covid
Add Comment