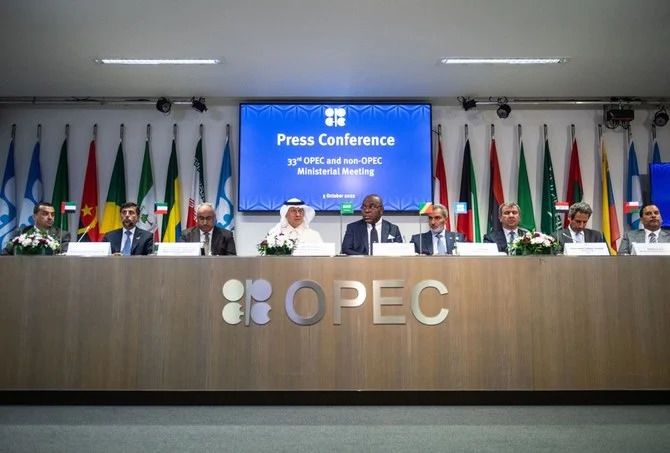 ‘We don’t use oil as a weapon’: Saudi Arabia hits back at US in OPEC+ cuts row

Saudi Arabia has told the US that postponing the decision by the Organization of the Petroleum Exporting Countries and its allies to cut production would have been negative for the world, the foreign ministry said in a statement.

The group, known as OPEC+, agreed to cut supply by 2 million barrels a day on Oct. 5.

US President Joe Biden, who is attempting to stop Russia profiting from energy sales to limit Russia’s war in Ukraine, called the decision “shortsighted”, and promised “there will be consequences” for Saudi-US relations, without clarifying what his administration intends to do.

In response, the Saudi Foreign Ministry said claims the Kingdom was taking sides in international conflicts or had supported the cuts for political reasons against the US were not based on facts and took the OPEC+ decision out of its economic context.

“The Kingdom clarified through its continuous consultation with the US Administration that all economic analyses indicate that postponing the OPEC+ decision for a month, according to what has been suggested, would have had negative economic consequences,” the statement said.

The ministry statement said the agreement between OPEC+ nations was unanimous and sought to balance supply and demand to help curb market volatility, adding that Saudi Arabia rejected any attempt to divert it from the goal of protecting the global economy from oil market fluctuations.

Saudi Arabia's Minister of State for Foreign Affairs Adel al-Jubeir struck a bullish tone in an interview on CNN, saying: “Saudi Arabia does not politicise oil. We don’t see oil as a weapon. We see oil as our commodity. Our objective is to bring stability to the oil market. And our record is very clear on this not over the past few weeks but over the past decades.”

Regarding the impact the row is having on relations between Saudi Arabia and the US, he added that the two nations had “permanent” interests, such as fighting extremism and terrorism.

Saudi Energy Minister Prince Abdulaziz bin Salman also took to the airwaves, and told Bloomberg: “Our current priority is stability in the market in terms of demand and investment.”

On prioritizing profit directly he said: “That mantra maybe could be acceptable if it is meant to be that we are deliberately doing this to jack up prices and that is not on our radar, our radar is to make sure we sustain markets.”

The Saudi foreign ministry statement, citing an unnamed official, said: “Resolving economic challenges requires the establishment of a non-politicized constructive dialogue, and to wisely and rationally consider what serves the interests of all countries. The Kingdom affirms that it views its relationship with the US as a strategic one that serves the common interests of both countries.”

Abdulaziz Al-Moqbel, a consultant and energy markets specialist, told Arab News the US position is "directly influenced by the status of the refining sector in the US", which is characterised by aging refineries and a lack of diverse sourcing of heavy and medium crude benchmarks.

He added: “The global economy has been battered by a series of macro events such as the trade war between the largest two economies followed by a pandemic and last but not least the conflict between Russia and the Ukraine.

“Any disruption in the oil markets could cause yet another economic distress. The OPEC+ decision aims to be proactive and preemptive to avoid any consequences of yet another global economy crisis.”

He went to praise “the important and pivotal role played by the Kingdom at the regional and international levels in the field of mutual respect between countries”, as well as “the Kingdom's commitment not to compromise the sovereignty of states, protecting the global economy from fluctuations in energy prices and ensuring its supplies according to a balanced policy that takes into account the interests of the producing and consuming countries.”

US Democrats, with an eye on the impact of rising gas prices ahead of November elections, have assailed Saudi Arabia, with some even calling for the end of defense cooperation between the longstanding partners.

The average US gas price stood at $3.92 per gallon on Wednesday.

“This is a failure of American policy. Joe Biden is directly responsible for the place that the world finds itself on energy.”

He also accused the progressive left of spending 25 years of thinking they are “going to run the world on sunshine and windmills.”

Aside from not building new refineries, Pompeo said the current administration has the wrong strategy for making the US energy independent.

“We shut down a pipeline, we’ve made it hard to permit, we’ve got ESG rules that now deny the capacity to get American energy out of American ground for American consumers.”

“We have the capacity for self-help here in the US,” Pompeo told Fox News Sunday.

“To point the finger at someone else, at OPEC or at the Saudis, is an enormous mistake when America has the capacity to produce energy independence for its own country and, frankly, provide energy for the world as well.”