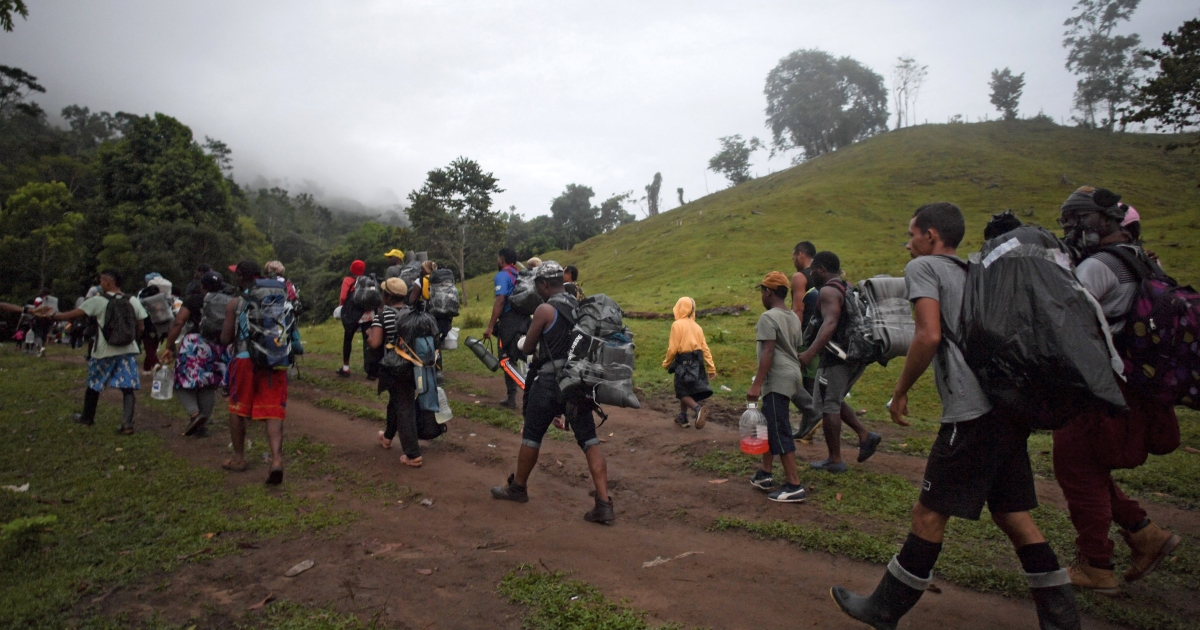 Yosimar Carrasquero learned quickly that to survive the treacherous Darien Gap, stay with a group – and keep going.

Two days into an eight-day trek through the jungle passage that connects Colombia with Panama, the 19-year-old Venezuelan migrant and her husband fell behind and lost their way.

Soon afterwards, a group of four knife-wielding men encircled them and demanded that they hand over all their belongings. Carrasquero clung to her seven-month-old son.

“I thought, this is as far as we’re going to get,” she told Al Jazeera in a telephone interview from the San Vicente Migrant Reception Station in Panama, alongside a Doctors Without Borders (Medecins Sans Frontieres, or MSF) (MSF) social worker.

But the robbers – having taken their IDs, food, clothes and the little money they had saved – swiftly fled upon hearing the sounds of another large group of migrants approaching through the jungle behind Carrasquero’s family.

“Women, in particular, have to be very careful, because there are bad people that look at you a certain way,” she said. “You have to stay close to other people. If you end up too far behind, anything can happen. They can rob you, they can rape you, or kill you.”

The Darien Gap has been a migratory route for decades. But last year, the number of people braving the inhospitable terrain exploded, as the COVID-19 pandemic and associated economic fallout drove more migrants and refugees to set out on foot in search of better living conditions. More than 133,000 people crossed the Darien Gap in 2021, according to the United Nations refugee agency (UNHCR) – up from 8,500 the previous year and 23,000 in 2019.

This year is on track to surpass that record number, the agency said, with nearly 20,000 people crossing in the first four months, double the number from the same time period last year.

With the pace of migration accelerating, aid organisations are sounding the alarm about the increasing risks of the journey, and the difficulties that local governments face in addressing the medical needs of this vulnerable group.

People emerge from the jungle, covered in mosquito bites, with scrapes and broken bones. They are dehydrated, hungry and traumatised, having been stalked not just by wild animals, but by criminal gangs and smugglers who beat and rob them, or extort them in exchange for safe passage through steep mountains and across turbulent rivers.

Sexual violence is also wielded as a weapon: Women and adolescents are raped in exchange for payment, or to instil terror. Some people don’t make it out at all.

In 2021, the vast majority of migrants and refugees crossing the Darien were Haitians. Now, the largest grouping is Venezuelans, who represented close to half of the migrants and refugees traversing the passage so far this year. Another 24 percent were from Africa, 20 percent from the Caribbean and 11 percent from Asia, predominantly Bangladesh and India, according to UNHCR.

“Migrants should be able to travel through routes that are safe, and these routes need to be established by the competent authorities,” Angela Martinez, a doctor and coordinator of the MSF mission in Colombia and Panama, told Al Jazeera.

“We have to be able to protect them from these things – so that they’re not assaulted, robbed, subjected to violence. They are risking their lives, and the lives of their families.”

Al Jazeera contacted the Panamanian Ministry of Public Security and the National Office for the Attention of Refugees for comment on how the state was addressing migrant safety, but did not immediately get a response.

MSF has expressed specific concerns about the lack of medical attention for women who suffer sexual violence. After leaving the Darien Gap, they cannot access a doctor until San Vicente, which is a three-hour boat ride away, and risk not getting the necessary treatment to prevent infections such as HIV or unwanted pregnancies. During the past year, MSF has treated more than 400 cases of sexual violence that occurred in the Darien jungle.

“The longer it takes, the greater the violence suffered,” Martinez said.

With a record number of children making the crossing, MSF is also seeing a spike in cases of diarrhoea and respiratory infections. The international NGO said it is crucial for local authorities to establish more health posts along the route, specifically in Canaan Membrillo, an Indigenous community that is one of the first points of contact once people emerge from the gap.

The Panamanian government has committed to sending a doctor to Canaan Membrillo, Martinez said, but MSF is still awaiting government authorisation to work there.

“One medical team will not be enough,” she warned, noting that psychologists are also needed to help people cope with the mental trauma.

On a recent visit to the government-run San Vicente Migrant Reception Station, Margarida Loureiro, the deputy representative for UNHCR in Panama, heard details of some of these gruelling journeys. Stories poured out of people like the rivers that rush through the gap.

“It’s not just the hardship of the Darien itself; the slippery mountains, with rivers with very strong currents,” she told Al Jazeera. “People said they saw bodies, and when they didn’t see them, they could smell them.”

Although the Panamanian government is increasing its assistance to places such as Canaan Membrillo, Darien province suffers from very limited health and other basic services, Loureiro said.

San Vicente, meanwhile, is bursting at the seams, unable to properly house the enormous influx of people who arrive each day. Children and pregnant women are sleeping on the floor, and MSF says the situation is worsening. UNHCR is trying to alleviate some of the pressure by providing temporary housing units, sleeping mats and hygiene kits, and the government is in the process of renovating the centre, but medical workers said the conditions are still well below international standards.

“There aren’t showers; people use water sources to bathe publicly,” Martinez said. “There isn’t any privacy for women and children, and the number of toilets is too low for the number of people who are there.”

The arrival numbers can be overwhelming – 900 people in a single day on one occasion, she said.

Some migrants may stay a few weeks, but many move on more quickly, taking buses to the border with Costa Rica.

Carrasquero and her family headed there the day after speaking with Al Jazeera, having heard of opportunities to work and save money for their onward journey north to New York, where she has a sister.

“We left because we didn’t have a choice,” Carrasquero said. “We needed to leave to find a better life for ourselves, but especially for our son.”

Anna 106 days ago
And in the end they are still illegal invaders. No tears for you. Go the legal route like many others have.
View all comments (1)Add comment