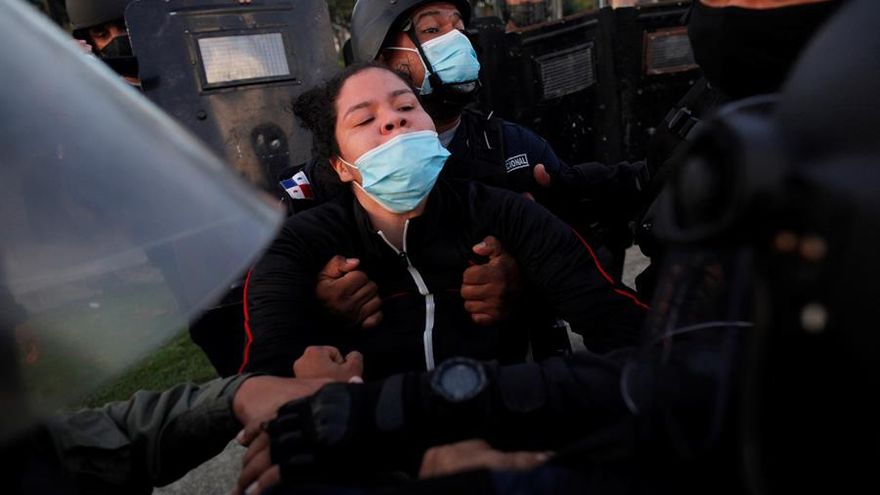 We are not afraid, because protesting is not a crime, said Ileana Corea after her release

The young university student was involved in an action of police brutality in the middle of the protest.
After her release, the university student Ileana Corea returned to the streets to protest against the Government of the President of Panama Laurentino Cortizo, assuring that they are not afraid of the repressive measures applied against the protesters by the National Police.

"I am on the street, after being in a 3 by 3 meter cell, it is because of the Police, it is because the State, it is because the government, the pressure groups know that these youth are rising. We are not afraid, because protesting is not a crime, "Korea said with microphone in hand as she was applauded by her colleagues.

The young woman was apprehended on Wednesday afternoon by the National Police, along with 26 other protesters, in the midst of the protests in Plaza 5 de Mayo, where they stood up against corruption and the measures taken on the solidarity bond and the pandemic of the COVID-19.

It should be noted that Korea was also involved in an act of aggression by an Alpha unit of the Police, a fact that was recorded in a video where it was seen that she was hit in the face by the uniformed woman, an act that was repudiated by both the rector of the University of Panama, Eduardo Flores, and the director for the Americas of Human Rights Watch ( HRW ), José Miguel Vivanco.
#COVID-19  #Covid
Add Comment