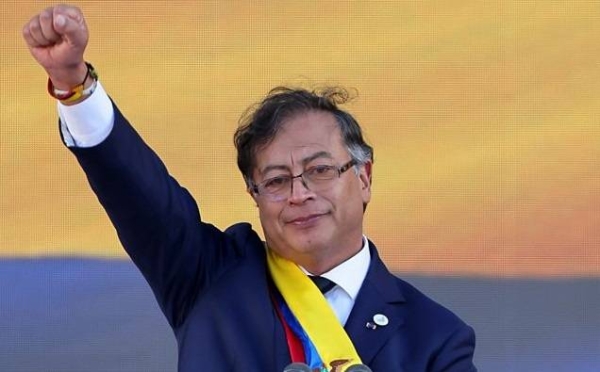 Colombian President Gustavo Petro has called for a fresh global strategy to combat illegal drugs trafficking.
Speaking at his inauguration, the country's first ever left-wing leader declared the "war on drugs" a failure.Hundreds of thousands of people died in Colombia's decades-long civil war, fuelled in part by the narcotics trade.

The 62-year-old former Bogota mayor and ex-rebel fighter was elected in June on a radical manifesto promising to fight inequality and ban new oil projects.

Mr Petro told a crowd of his supporters in Bogota that it is time for a new global convention that "accepts the war on drugs has failed."

"It has left a million dead Latin Americans during 40 years," he said, "and it leaves 70,000 North Americans dead by overdose each year."

More than 50 years ago US President Richard Nixon kickstarted a global anti-narcotics strategy that emphasized criminalization and the use of police force, which became known as the "war on drugs."

In Colombia, which according to estimates produces more than half of the world's cocaine, criminal groups and local militias are heavily involved in the drug's production and transportation to consumers around the world - including in the US and Europe.

More than 100,000 supporters gathered in Bogota's main square on Sunday to watch the former Marxist rebel make history by being sworn in as Colombia's first left-wing leader.

He will serve with Francia Márquez, who was elected alongside Mr Petro to serve as Colombia's first black vice-president.

June's vote was held amid widespread discontent at the way the country had been run, and there were anti-government protests last year in which dozens of people died.

The new leader was elected on a radical manifesto to fight inequality by providing free university education, pension reforms, and high taxes on unproductive lands - a departure for Colombia which up until now has voted only conservative presidents into office.

He also pledged to fully implement a 2016 peace deal that ended a 50-year long conflict with the communist guerrilla group, Farc, and to seek negotiations with the still-active ELN rebels.

Mr Petro's inauguration marks a major political change in direction for the country, which for decades had been led by moderates and conservatives.
Add Comment