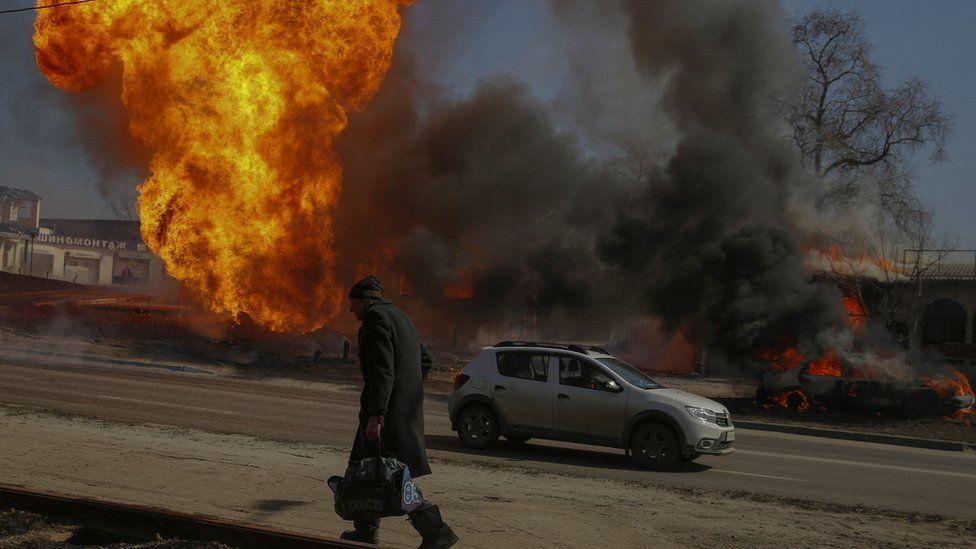 War in Ukraine: Change of emphasis or admission of failure by Moscow?

Is the Russian military having to change its plans? Perhaps even reduce the scale of Moscow's ambitions in Ukraine?

It's probably too early to tell, but there's definitely a shift in emphasis.

A top Russian general - Sergey Rudskoy - says the "first stage" of what President Vladimir Putin calls Russia's "special military operation" has been mostly accomplished and that Russian forces will now concentrate on "the complete liberation of the Donbas".

This is likely to mean a more concerted effort to push beyond the "line of contact" that separates Ukrainian government-held territory in the east of the country from the Russian-backed separatist "people's republics" of Donetsk and Luhansk.

The pace of Russia's advance in other areas of Ukraine remains glacial. Its forces have been pushed back from positions around the capital, Kyiv, and are said to have started digging defensive positions to avoid losing more or prepare for some kind of pause.

It's probably way too early to conclude that Russia has given up on capturing Kyiv, but Western officials say that Russia continues to experience setback after setback.

On Friday, they said Russia had lost another general - the seventh - and that morale was at rock bottom in some units. 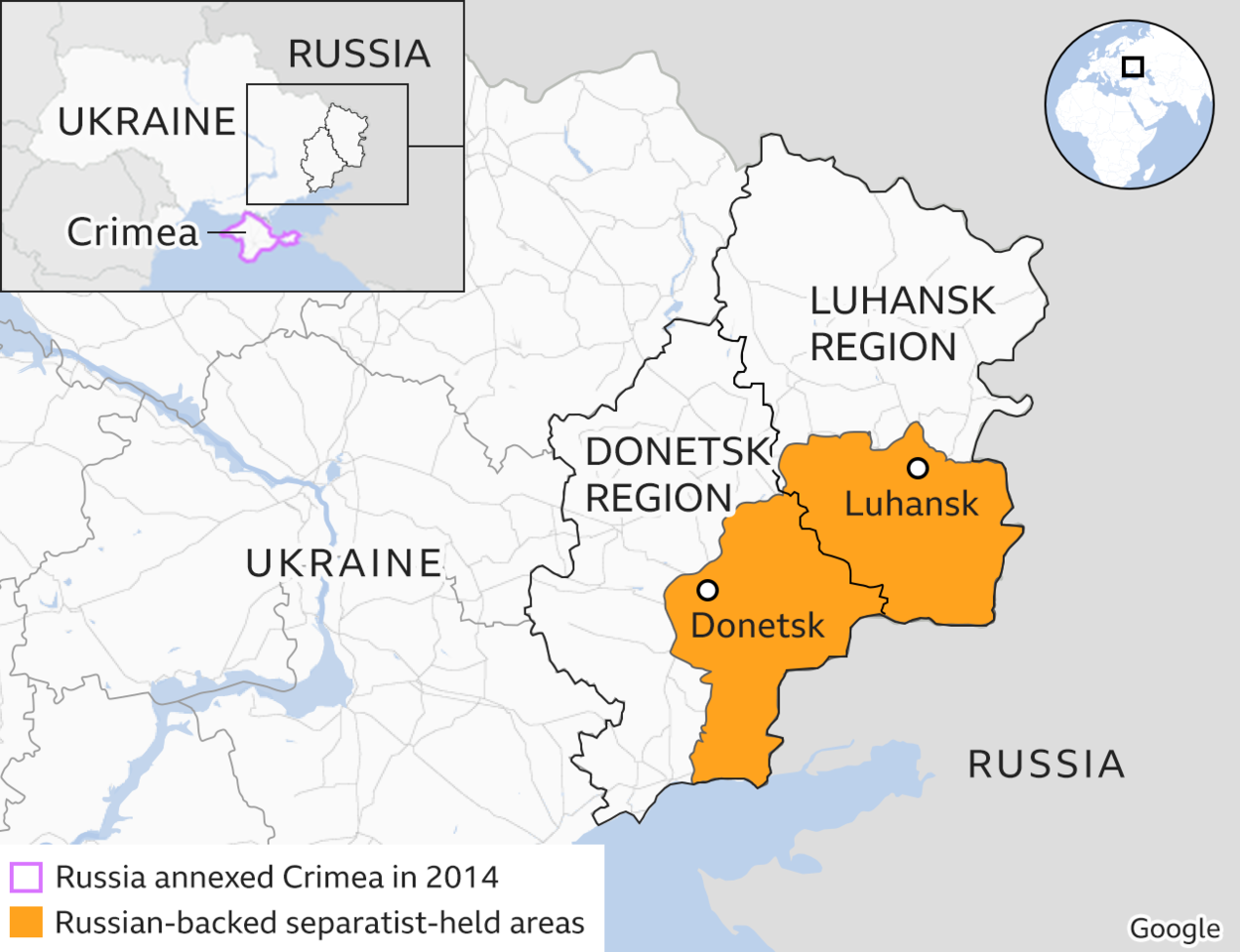 They believe General Rudskoy's announcement implies that Moscow knows that its ambitious pre-war strategy has failed.

"Russia is recognising that it can't pursue its operations on multiple axes simultaneously," one official said.

As many as 10 new Russian battalion tactical groups are being generated, officials say, and are heading for the Donbas.

Even before the war began last month, they voiced the fear that Russia would make a concerted effort to encircle and envelop Ukraine's best fighting units which make up the Joint Forces Operation (JFO), stationed along the line of contact.

Retreat may not mean tame ambitions

A renewed push now could see Russian troops pushing out into so-far unconquered areas of Donetsk and Luhansk, possibly aiming to link up with forces moving south from Kharkiv and Izyum.

And if Russia can succeed in finally pacifying the port of Mariupol, on the Sea of Azov, then other forces could move north and complete the encirclement of the JFO.

Some of these objectives still seem out of reach. Mariupol's defenders are putting up a ferocious fight, preventing Russia from fully achieving another of its pre-war ambitions - a land bridge from the Crimean Peninsula to the Donbas.

But if Moscow has concluded that it makes more sense to concentrate, for the time being, on achieving one objective at a time, it's likely to concentrate its firepower, especially from the air.

The Ukrainian military, disciplined and motivated as it is, will need all the help it can get to withstand the pressure.

"I hope that's where the Western supply of arms will make a significant contribution to Ukrainian forces," one Western official said.

If the coming days do see a shift of focus to the Donbas, that doesn't yet mean that Moscow has abandoned its wider ambitions.

"We don't see a re-evaluation of the invasion as a whole," a senior US defence official said.

Russian advances in the east 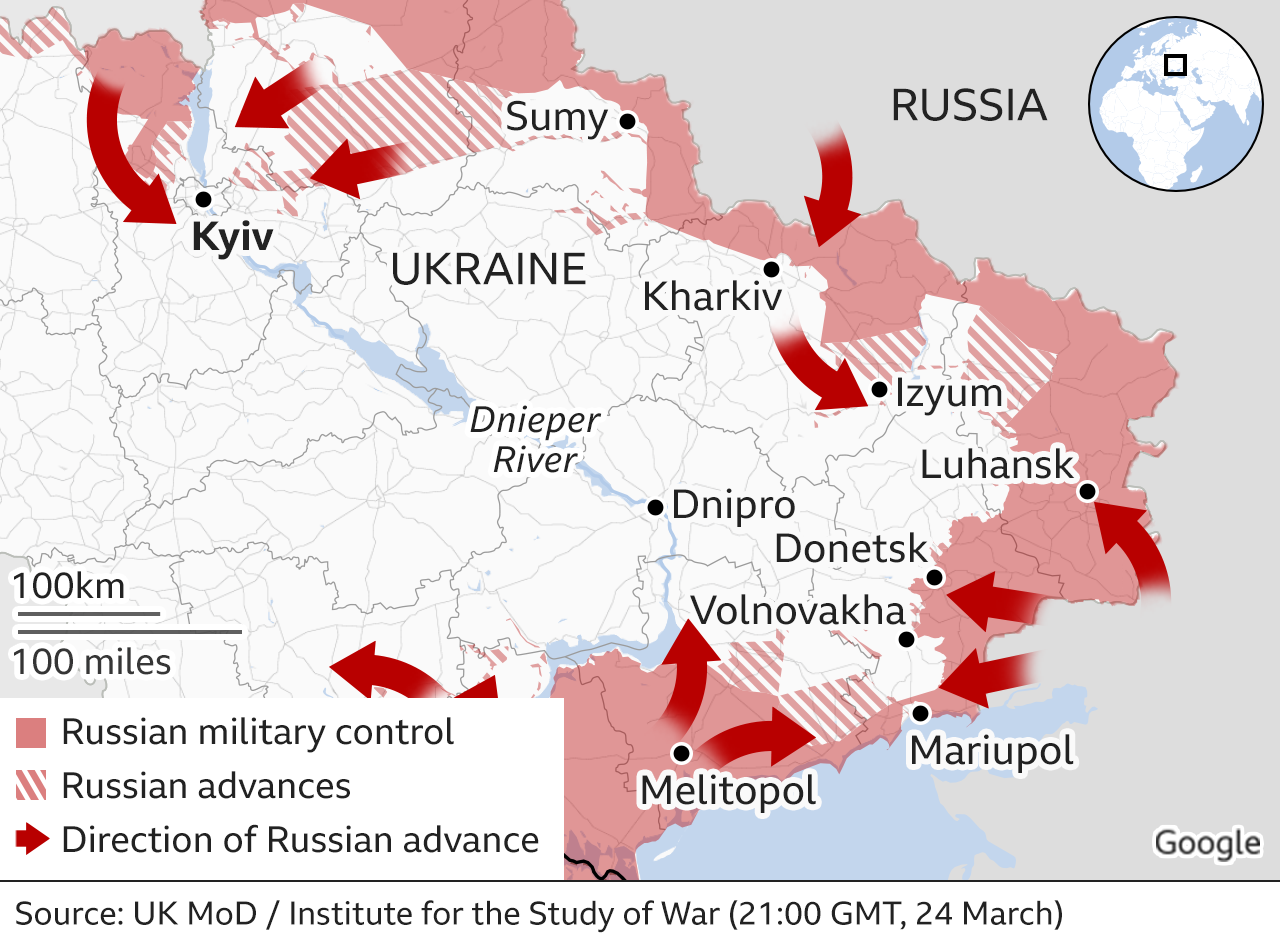 A survivor told the BBC: "We were sprayed with broken glass and concrete"
Add Comment