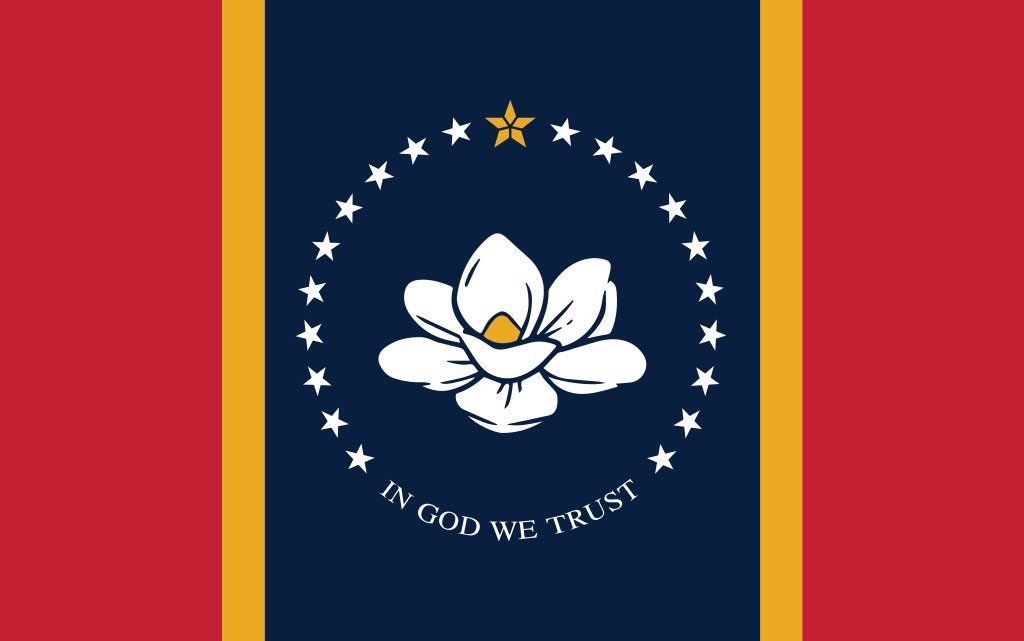 Voted: This will be the new state flag of Mississippi

Mississippi approves flag with magnolia, ‘In God We Trust’. Voters overwhelmingly approved it. This is a great day for the state as a move forward from a divisive emblem that now rests in the past.
Mississippi will fly a new state flag with a magnolia and the phrase “In God We Trust,” with voters approving the design Tuesday. It replaces a Confederate-themed flag state lawmakers retired months ago as part of the national reckoning over racial injustice.

The magnolia flag was the only design on the general election ballot, and voters were asked to say yes or no. A majority said yes.

Legislators will have to put the design into law, but they are expected to do that with little fuss because they already did the hard work of retiring a flag that some people wanted to keep.

Mississippi has been without a flag since late June, when legislators surrendered the last state banner in the U.S. that included the Confederate battle emblem — a red field topped by a blue X with 13 white stars. The rebel flag has been used by Ku Klux Klan groups and is widely condemned as racist.

The new Mississippi flag has the state flower on a dark blue background with red bars on either end. The magnolia is encircled by stars representing Mississippi as the 20th state. The flag also has a single star made of diamond shapes representing the Native American people who lived on the land before others arrived.

White supremacists in the state Legislature adopted the Confederate-themed flag in 1894 amid backlash to power Black people gained during Reconstruction.

For decades, the flag was divisive in a state with a significant Black population, currently about 38%. A majority of voters chose to keep the flag in a 2001 election, but several cities and counties and all of Mississippi’s public universities had stopped flying it because of the Confederate symbol. Many furled the Mississippi flag after mid-2015, when a white man shot and killed nine Black people worshiping at a church in Charleston, South Carolina; he had previously posed for photos with the rebel flag.

Until this summer, a majority of Mississippi legislators were unwilling to consider changing the flag because they considered the issue too volatile. Momentum changed as protests broke out across the U.S. after a Black man was killed in Minneapolis police custody. The final push for changing the Mississippi flag came from business, education, religious and sports groups — including, notably, the Mississippi Baptist Convention and the Southeastern Conference.

Angela Reginal, 53, of Pearl, said she voted for the new design. Reginal, who is Black, said the Confederate-themed old flag was “part of history,” and although she said it never bothered her, she believed it needed to be changed.

“For me, if it offends my brother, I think it needs to be changed,” said Reginal, who works in the office of a home health agency.

A white voter at the same precinct in Pearl, Beki Routh, said she voted for the new flag but wanted to keep the old one.

“If you try to erase history, you’re doomed to repeat it,” said Routh, 50, a bank employee.

Joan Martin, 79, a retired registered nurse from Picayune, said she voted for the new flag because “I didn’t have any choice.

“There was just the one thing and I thought it looked pretty and it said ‘In God We Trust,’ so I voted yes on it,” said Martin, who is white.

The law retiring the old flag specified that the new one could not include the Confederate battle emblem and must have “In God We Trust.” Requiring the religious phrase helped persuade some conservative legislators to let go of the old flag.

Taderell Lamont Roberts, 48, of Picayune, goes by his middle name, which was on the name patch on his work shirt for Heritage Plastics, where he’s a foreman. He said he voted for the new flag.

“That old flag to me represented a lot of rebelism, you know, the good old boys,” said Roberts, who is Black. “It never bothered me. ... But is time for a different flag so our new generation can see that all that is in the past, and they don’t have to deal with that. We were brought up to just live with it. But I’m glad that now it’s time for a change.”

The public submitted nearly 3,000 flag designs. A nine-person commission — with members appointed by the governor, lieutenant governor and House speaker — chose the magnolia flag to go on the ballot.

If voters had rejected the magnolia flag, the commission would have designed another flag that still could not include the Confederate symbol and must include “In God We Trust.” That design would have gone on the ballot in November 2021.

Separately, supporters of the old Mississippi flag are starting an initiative that could revive the old flag by putting the Confederate-themed banner and some other designs up for a statewide vote. But they face big hurdles in gathering enough signatures to get their ideas on the ballot, and their efforts could be complicated by limited public interaction during the coronavirus pandemic.
#Coronavirus
Add Comment