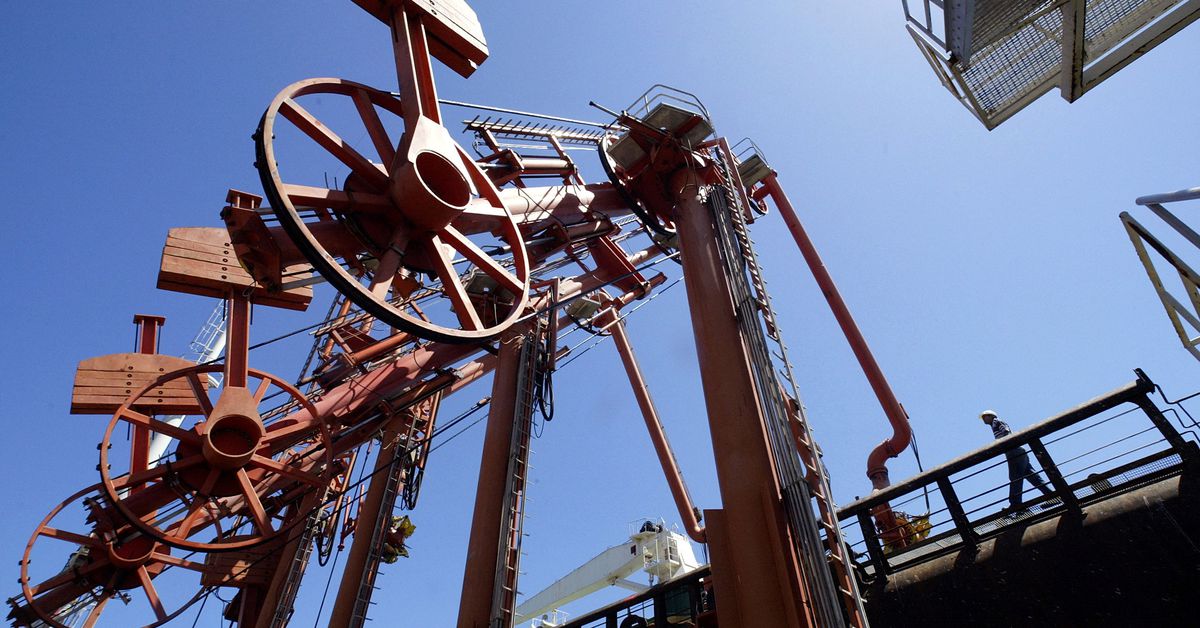 Venezuela's oil exports last year declined due to infrastructure outages, U.S. sanctions and rising competition in its key Asia market despite assistance from ally Iran, according to shipping data and documents.

Exports this year are expected to get a lift after the United States relaxed oil sanctions by authorizing some partners of state-run firm Petroleos de Venezuela (PDVSA) to resume taking Venezuelan crude.

Iran expanded its role in Venezuela last year, sending supplies to boost exports and technicians to repair a refinery. But the poor condition of the country's ports, oilfields and refineries and harsh competition from Russia on crude supplies to China will keep limiting export gains, experts said.

PDVSA and its joint ventures exported some 616,540 barrels per day (bpd) of crude and refined products last year, a 2.5% drop from 2021 and slightly below 2020, according to a Reuters tally of data and documents. 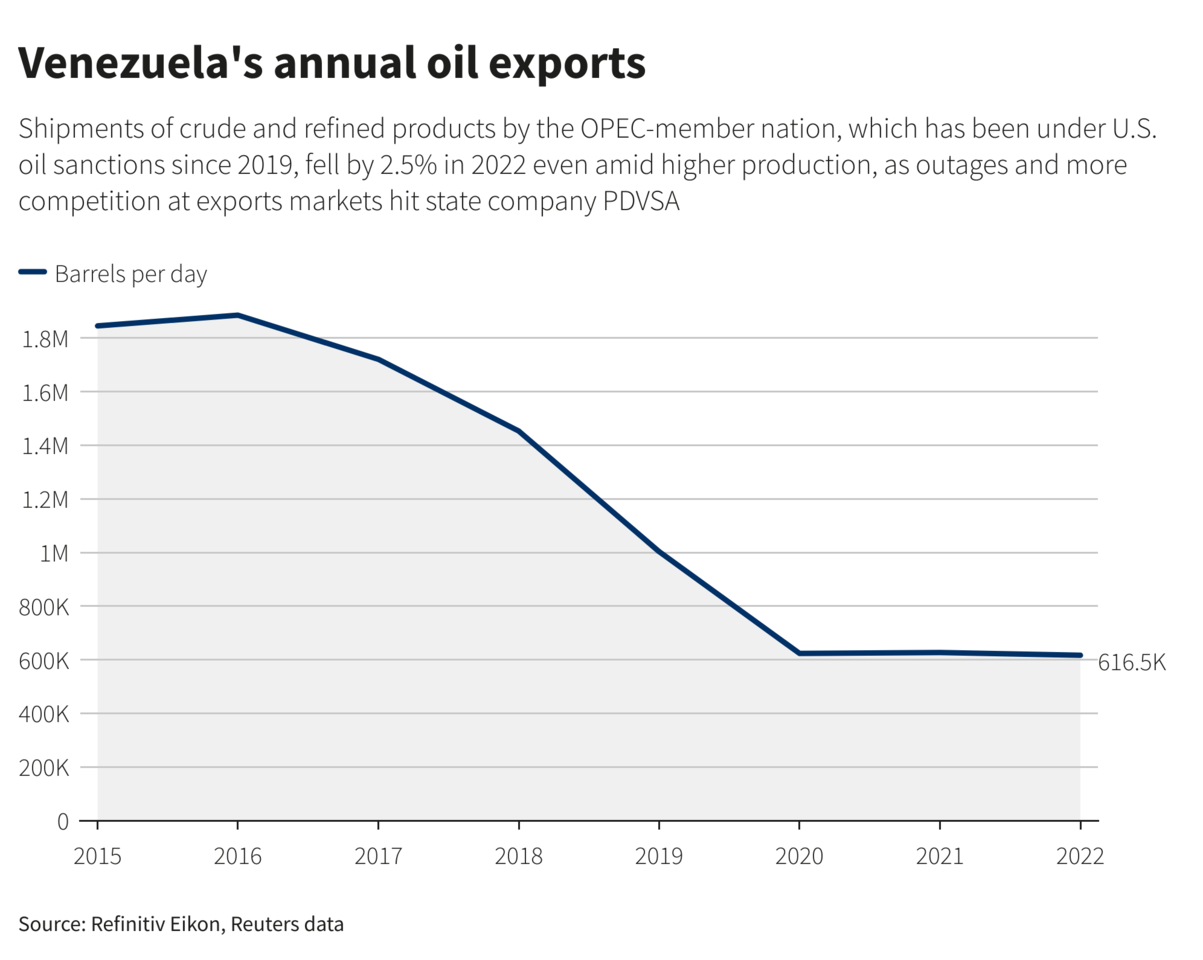 Shipments of crude and refined products by the OPEC-member nation, which has been under U.S. oil sanctions since 2019, fell by 2.5% in 2022 even amid higher production, as outages and more competition at exports markets hit state company PDVSA
"Despite the increased Iranian help, the decline in net exports results from a combination of production stagnation and the increasing competition of Russian exports in the Chinese black market," said Francisco Monaldi, a Latin American energy expert at Rice University's Baker Institute.

PDVSA did not immediately reply to a request for comment.

The OPEC-member country boosted its exports of petroleum coke, methanol and other oil byproducts, which helped offset some of the revenue loss. Shipments of these lower-value products more than tripled to 4.36 million metric tonnes last year from 2021.

PDVSA's refineries began the new year processing 386,000 bpd of crude, less than 30% of their 1.3 million-bpd installed capacity, according to figures from employee unions.

Refining shortages due to plant outages and delayed maintenance at year-end left the domestic fuel market with long lines of drivers waiting for gasoline in front of stations.

The new gasoline crisis is emerging even though Venezuela tripled oil imports to 78,170 bpd, mainly from deliveries of crude and condensate from Iran, which helped produce exportable crude grades and motor fuels.

Venezuela's crude production averaged some 721,000 bpd according to a preliminary data for December and OPEC reports. Output rose 13% from the previous year and stood above pandemic levels, but it remained well below historic averages and fell short of PDVSA 2022 goal of 2 million bpd, the data showed. 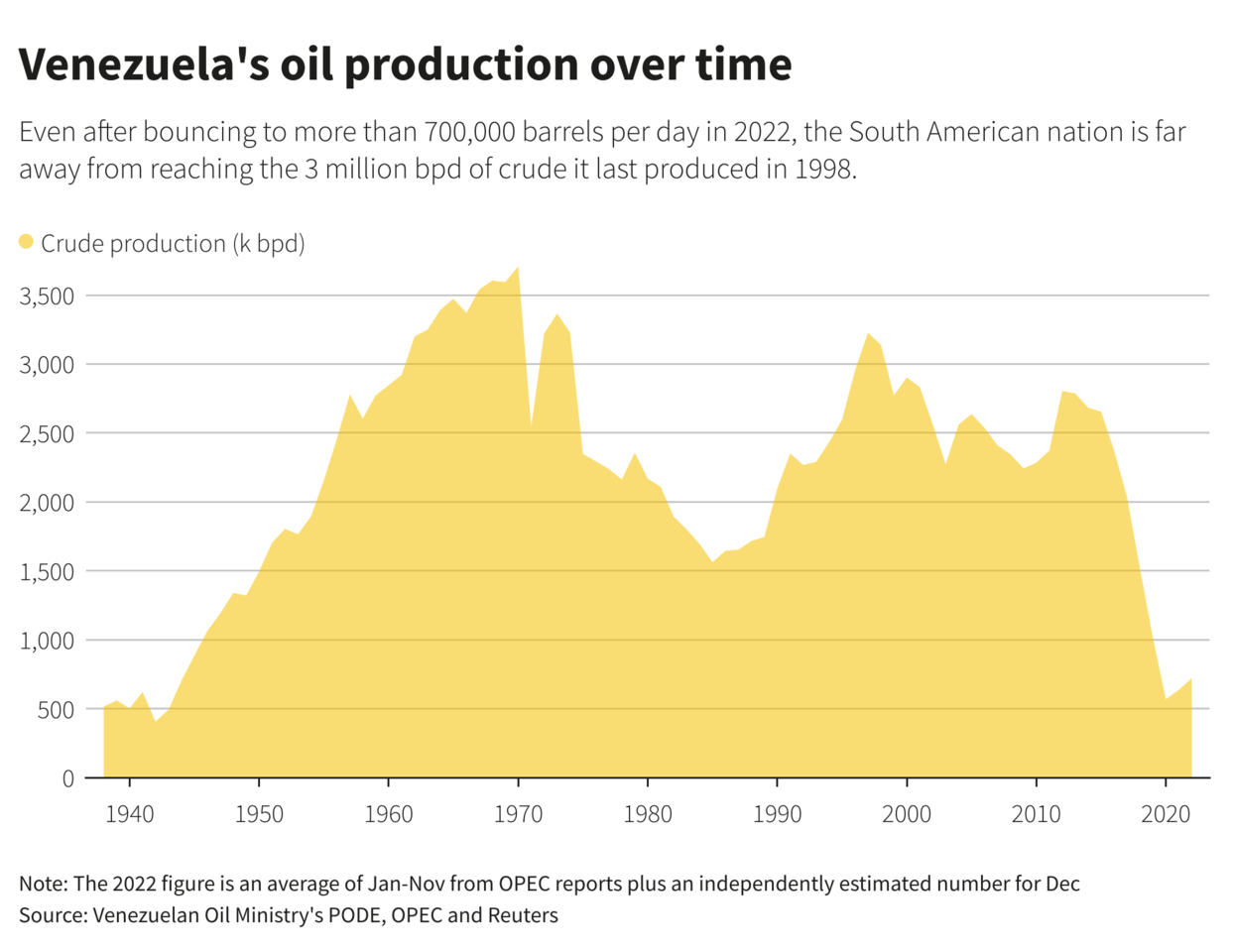 Even after bouncing to more than 700,000 barrels per day in 2022, the South American nation is far away from reaching the 3 million bpd of crude it last produced in 1998

Crude oil output is set to increase by about 100,000 bpd this year, Baker's Monaldi said, adding that exports could recover a little more if the joint ventures can drain millions of barrels in inventories and if PDVSA is able to compete more aggressively in Asia.

A U.S. license granted to Chevron Corp (CVX.N) to recover output and exports in Venezuela will take effect this year. Italy's Eni (ENI.MI) may also get a cargo of Venezuelan crude this month.

Venezuela in 2022 received some $6 billion to $7 billion in oil cash after price discounts, shipping costs, fees, swaps and debt repayment, according to independent figures. A global appetite for fuel alternatives boosted its oil byproducts exports, which added millions of dollars last year. 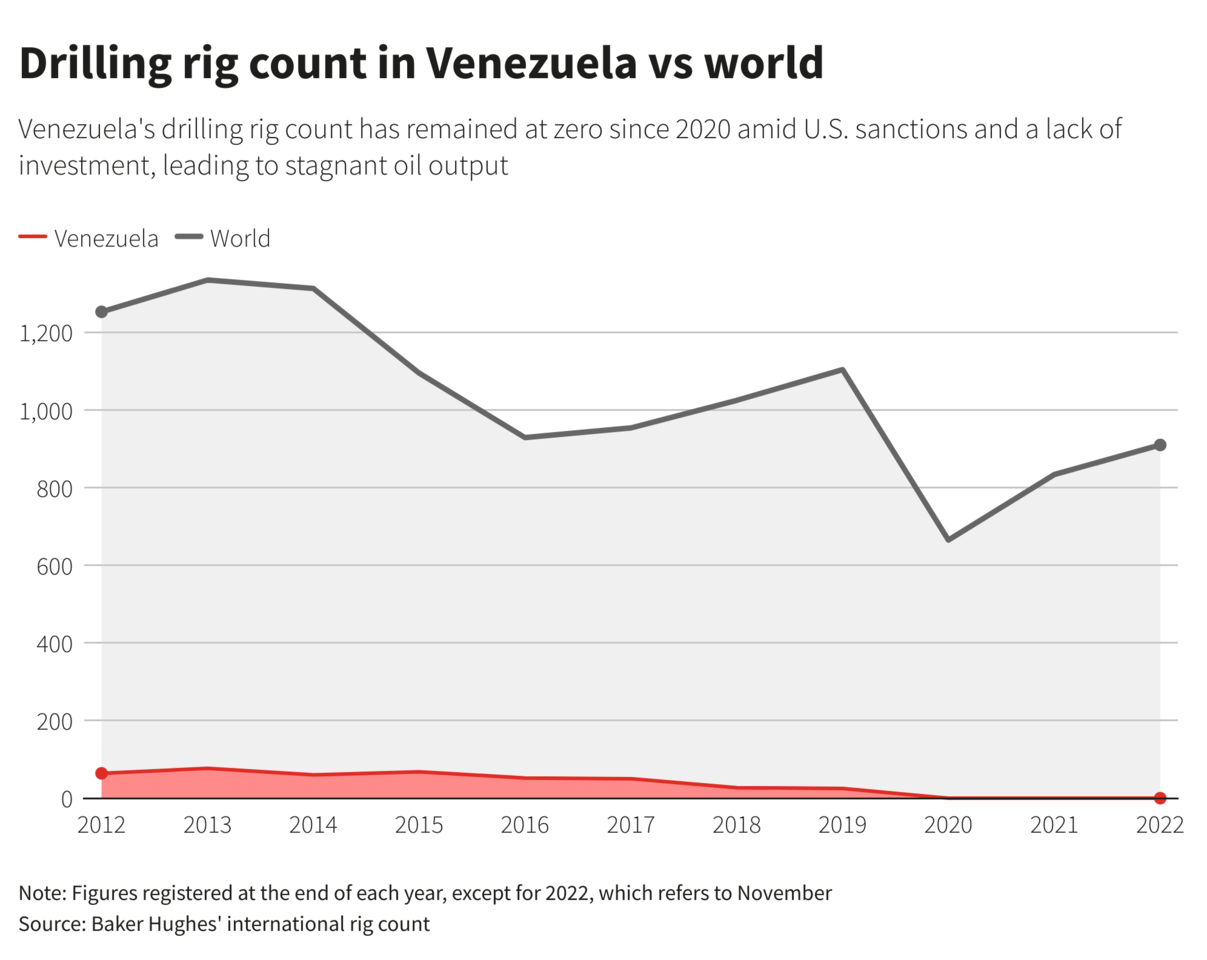 Venezuela's drilling rig count has remained at zero since 2020 amid U.S. sanctions and a lack of investment, leading to stagnant oil output