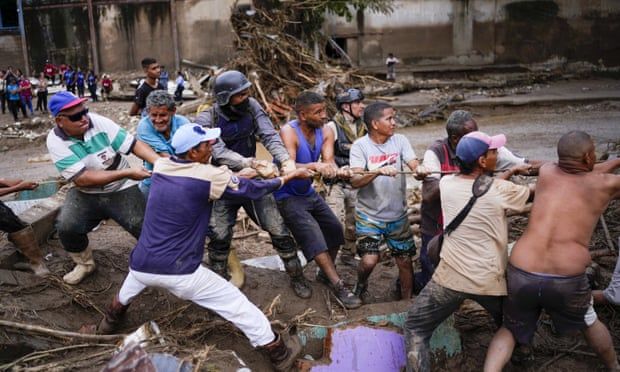 At least 25 people died and 52 were missing after five small rivers in central Venezuela flooded due to heavy rains, the government said.

The downpour on Saturday night swept large tree trunks and debris from surrounding mountains into the town of Tejerias, 67km south-west of the capital, Caracas, damaging businesses and farmland, according to the vice-president, Delcy Rodríguez.

Rodríguez said a month’s worth of rain had fallen in eight hours and pumps used to power the community’s drinking water system were carried away in the flood waters.

She said the priority was to locate people still trapped under mud and rocks throughout the town, while military and rescue personnel also searched the riverbanks for survivors.

“We have lost boys, girls,” Rodríguez said from a flooded street in Tejerias. “What has happened in the town of Tejerias is a tragedy.” 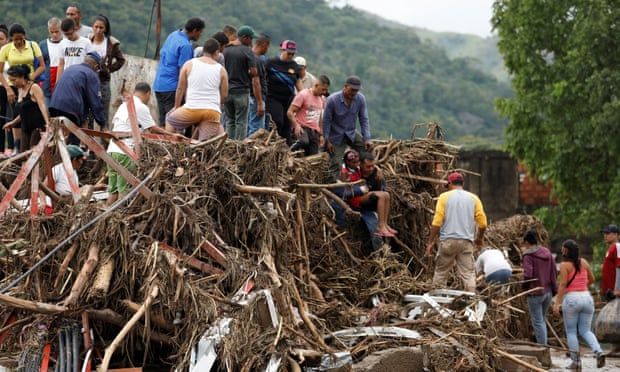 The town of Tejerias has been designated a disaster zone.

President Nicolás Maduro said he had designated the area a disaster zone and had declared three days of mourning.

The streets of Tejerias, a town of about 73,000 inhabitants, were filled with mud and lined by boarded-up houses, according to witnesses.

Armando Escalona, a 43-year-old taxi driver, lost his wife and five-year-old son. He said he was attending a church service with his family and the flood waters caught them by surprise. He remembered hugging his family for a short while until an unknown object hit his head and he lost consciousness. When he woke, he couldn’t find them.

“I can’t even talk. We were at the service and everything happened so fast,” Escalona said. 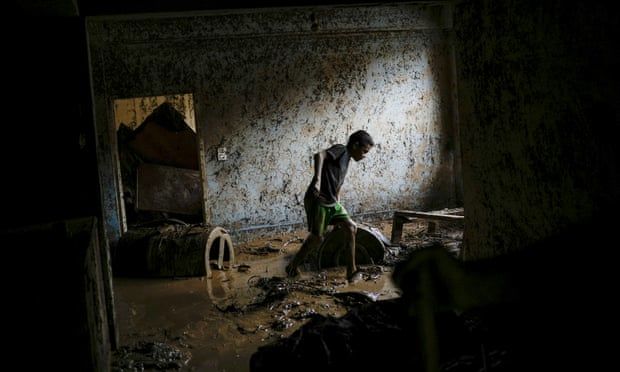 Residents of Tejerias have been working to remove mud from their homes.

Gustavo Arevalo, a 58-year-old vendor who also volunteers for a civil defence corps, said that the waters began to rise quickly on Saturday, bringing down the town’s telephone antenna. “As if dam water had been released,” said Arevalo, standing in the town’s centre, one of the hardest hit neighbourhoods.

After the flood waters receded, he tried to help others “recover what was left of their businesses”.

One of the flooded rivers, the El Pato, swept away several houses, shops and a slaughterhouse, according to search and rescue authorities.

The downpour also caused landslides in three other central states on Sunday morning, Rodríguez said, but no deaths were recorded.