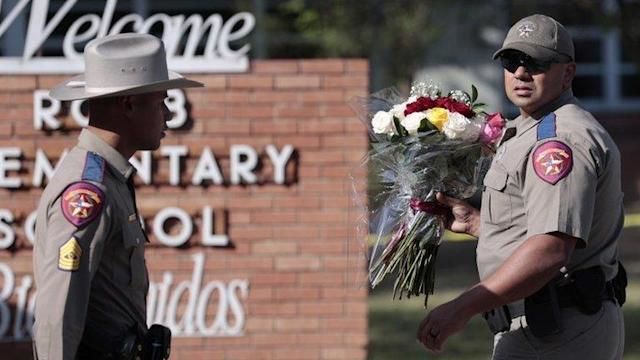 A gunman who attacked a primary school in Texas on Tuesday was able to enter the building unobstructed, police say.

Texas Ranger Victor Escalon said no armed guard challenged the teenage attacker and it is unclear if the school door was even locked.

Mr Escalon defended the police response amid mounting criticism of an apparent delay in confronting the gunman.

Mr Escalon said at Thursday's press conference that initial reports the gunman had shot a guard were incorrect.

He said officers entered the school four minutes after the gunman went in at about 11:40.

"They [didn't] make entry immediately because of the gunfire they were receiving," Mr Escalon told reporters.

But an hour lapsed before the gunman was killed in a shootout at 12:45 only after US Border Patrol tactical teams arrived.

Videos have emerged of police being urged by onlookers and desperate family members to storm the building immediately.

A father whose daughter died in the attack told the Associated Press news agency he had considered running into the school with bystanders out of frustration at the police response.

One mother told the Wall Street Journal that she was briefly handcuffed, accused of impeding a police investigation, after demanding along with other parents that officers storm the building. Angeli Rose Gomez said she saw one frantic father thrown to the ground by an officer, another father pepper-sprayed and a third who was later tased.

"The police were doing nothing," said Ms Gomez, who was eventually released before she said she jumped over the school fence and ran inside to rescue her two children. "They [the police] were just standing outside the fence. They weren't going in there or running anywhere." 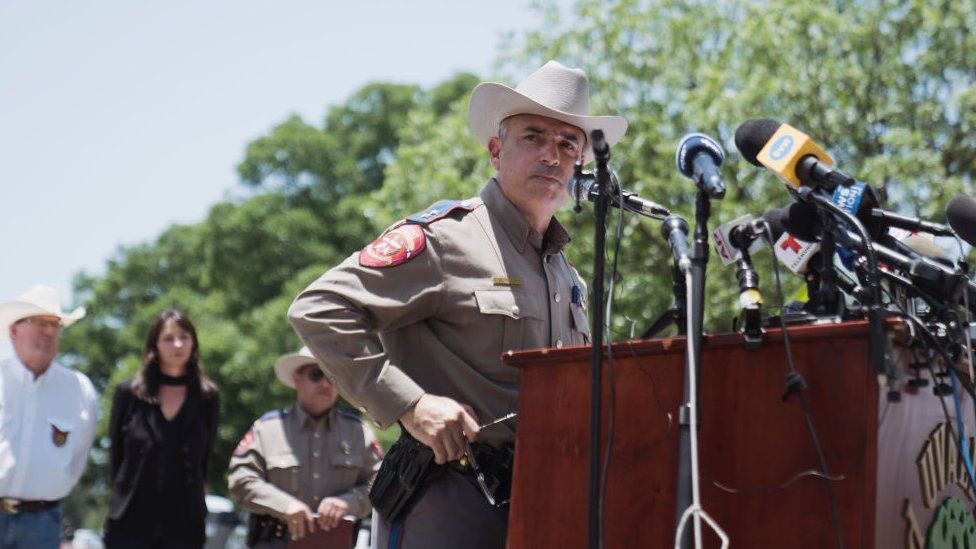 Mr Escalon - a Texas Ranger and spokesman for the Texas Department of Public Safety - said that during the time officers were outside the school they were calling in reinforcements and "also evacuating students, teachers".

"An hour later US Border Patrol tactical teams arrive, they make entry and shoot and kill the suspect," he added.

After crashing his truck into a ditch near the school, the gunman emerged and began firing an AR-style rifle at two people who were exiting a funeral home.

The suspect then jumped a fence and began firing "multiple, numerous rounds" at the school building, Mr Escalon said.

As he approached the entrance he "was not confronted by anybody", the ranger said.

According to Uvalde County Independent School District Officers protocol, campuses are required to have staff "who patrol door entrances, parking lots and perimeters". Teachers are told to keep doors locked at all times.

Texas congressman Joaquin Castro has written to the director of the FBI to ask that agents investigate the law enforcement response to the attack as it was unfolding.

Officials say they do not yet know how many bullets the teen fired during the rampage, but one law enforcement source told CBS News the gunman was carrying over 600 rounds of ammunition.

That's more than double what the average US combat soldier carries, the source said, adding that it appears the gunman was preparing for a massive gun battle with police.

Investigators have found no indication the gunman had a history of mental illness or a criminal record.

He legally purchased two AR-style rifles in the week before the attack, after turning 18.

President Joe Biden and the US first lady will visit Uvalde on Sunday, the White House announced.

Across the country, students staged class walk-outs on Thursday to protest against gun violence in schools.

A father has told the BBC how his two terrified children hid as the massacre unfolded inside Robb Elementary.

On Thursday, the husband of one of the two teachers killed in the attack died from a heart attack.

Joe Garcia "passed away due to grief" two days after his wife of 24 years, Irma Garcia, family members said.

'I just want my baby home' - relatives of children speak of their heartbreak
Watch: Meghan Markle visits memorial for the victims of a school shooting in Texas
#Joe Biden
Add Comment