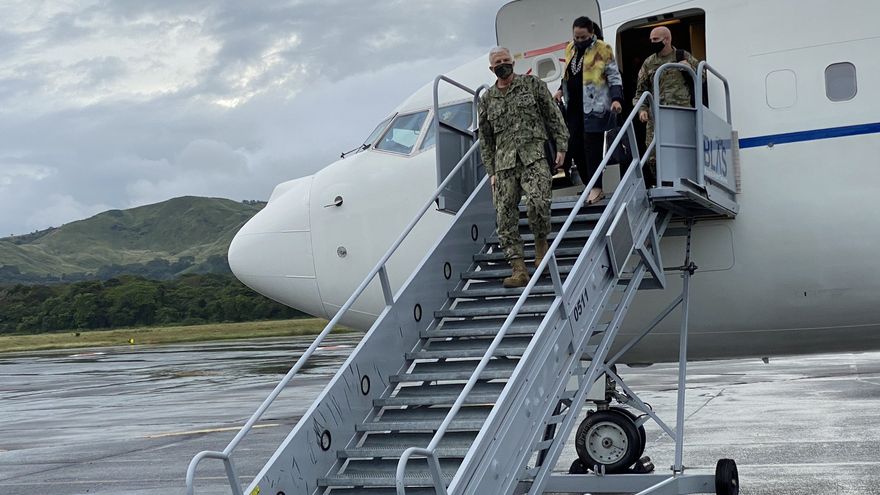 Panama is a "critical" point for drug trafficking to the United States, so Washington will expand its collaboration with the Central American country in the fight against criminal groups, the US Drug Enforcement Administration (DEA) announced on Wednesday.

Panama is a critical transshipment point between transnational criminal organizations that operate in South America and those that operate in Mexico, said the acting director of the DEA, Timothy Shea, during an official visit to the Central American country.

The DEA's relationship with the government and citizens of Panama is based on our shared commitment to combat these threats and protect our communities and families from the scourge of drug trafficking, added Shea.

His statements come on the eve of a meeting that will take place this Thursday in Panama between the head of the Southern Command , Craig Faller, and the Panamanian government.

According to a note from the US embassy in Panama, the meeting will be attended by security officials from both countries with the aim of coordinating efforts against drug trafficking and money laundering in the region.

During his visit, Shea met with the President of Panama, Laurentino Cortizo, the attorney general (chief prosecutor), Eduardo Ulloa, and the Minister of Security, Juan Pino.

In those meetings, Washington thanked Panama for its "fundamental support" to the DEA and "reaffirmed" its intentions to "maintain security in the region," the note added.

Recently, the Panamanian anti-drug prosecutor, Javier Caraballo, warned that drug trafficking to the United States, through Central America, has managed to keep pace despite the covid-19 pandemic.

This year we are culminating, perhaps, with the same or a little more than the amount of drugs seized in previous years, Caraballo said.

According to the prosecutor, during the pandemic criminal groups in the producing countries were storing "large amounts" of drugs that now need to export quickly and in large quantities, mainly through the Caribbean, to consumer countries.

He also pointed out that in 2020, more than 1,300 people have been arrested for their alleged links to drug trafficking, mostly Panamanians and Colombians.

In 2019, Panama broke its record for seizures, with almost 91 tons, the vast majority of them cocaine. That figure exceeds the previous mark of 85 tons, in 2017.

Panama has become the entrance to the Central American corridor that drug traffickers use to move drugs from South America, mainly Colombia, to the United States, the world's largest consumer.

Senior officials from Panama and the United States held a security meeting this Thursday, December 10, in which they addressed issues such as drug trafficking , money laundering and financing of terrorism.

Panama and US coordinate efforts against drug trafficking and money laundering


The Panamanian Foreign Ministry reported that during the meeting, interest was shown in reinforcing joint operations to combat transnational organized crime networks, drug trafficking and illegal fishing through the strengthening of naval, air and technological assets, which will result in capabilities national search and rescue teams for natural disasters.

In addition, the possibility of strengthening the Regional Center for Aeronaval Operations (CROAN) and the Joint Maritime Force - Panama (FMC-P) was analyzed.

An ongoing bilateral dialogue on cyber issues was also established.

The High-Level Security Dialogue mechanism between Panama and the United States strengthens the capacity to not only address issues related to that of both countries, but also regional security and hemispheric prosperity, particularly in the framework of recent efforts in the face of the COVID-19 pandemic and the impact of natural disasters, for whose assistance the United States has donated almost 8 million dollars, highlighted the Foreign Ministry.

The meeting took place days after the first visit of the acting director of the Drug Enforcement Administration (DEA), Timothy Shea to Panama.

The meetings will continue semi-annually.