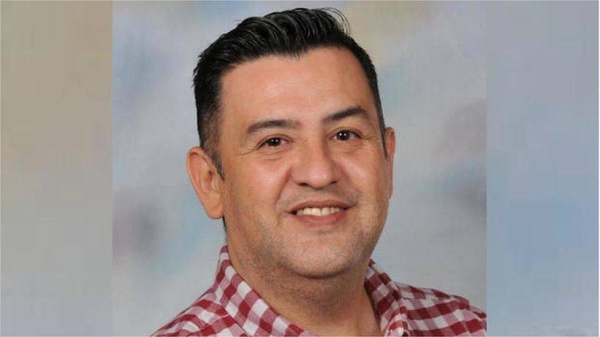 A teacher wounded in a school shooting in Uvalde, Texas, has criticized police as "cowards" for delaying taking action while his pupils were killed.
In a harrowing interview with ABC News he said he told his students to pretend to be asleep during the shooting.

Eleven of them died when the gunman stalked his and an adjacent classroom for over an hour as police stood in the hall.

"You had a bulletproof vest. I had nothing," he said of the police.

The shooting claimed the lives of 21 people, including 19 young children.

The attack by an 18-year-old local has led to renewed national debate about gun regulations.

Reyes, a fourth grade teacher who has taught for 17 years, said that he thought "it was going to be a good day" as he headed to school on the day of the attack in May.

The students were watching a film when shots broke out. He told them to hide under tables and pretend to be asleep, as they were taught.

But the gunman entered through an adjacent classroom and began firing.

Reyes was shot, then took the advice he had given his students and pretended to be asleep. As he lay near his desk, he could hear police who had rushed into the school only minutes behind the attacker.

But it took over an hour before police stormed the classroom and killed the attacker.

"I prayed and prayed that I wouldn't hear none of my students talk," he told the Good Morning America program, adding that he believed he was going to die.

"One of the students from the other classroom was yelling, 'Officer we're in here. We're in here,'" he continued.

"But they had already left. Then he [the killer] got up from behind my desk and he went over there and he began shooting again."

After conflicting information, police now say the killer was holed up in the classroom for 77 minutes before police breached the door. Uvalde police have faced heavy criticism for the delay.

Reyes said he felt abandoned by police, saying: "There is no excuse for their actions and I will never forgive them."

During the attack, children were frantically calling 911 to report multiple gunshot victims. Worried parents also tried to rush in, as police physically prevented them from entering.

Investigators say that messages from the children were not being relayed to officers at the scene, who were waiting for more firepower to arrive before confronting the rifle-wielding killer.

Officials say the police were "wrong" to think that the situation had changed from an active shooter to a barricaded subject, and that they had more time to prepare their response.
Add Comment