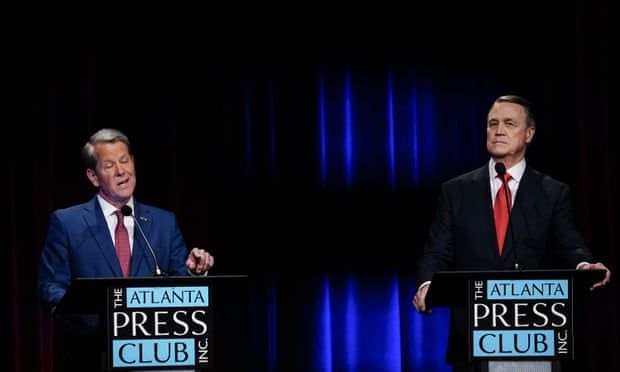 US midterm primaries: five key races to look out for

It is election night in America as a swath of primary races take place in states ranging from Georgia to Texas to Alabama.

Here are some key races to watch out for:

Trump’s preferred candidate for the Georgia governor’s race is former senator David Perdue but he is badly trailing incumbent Brian Kemp by a significant margin.

Trump’s thirst for revenge over Kemp for refusing to block Joe Biden’s win in Georgia, or support the big lie that the election was stolen, became calcified in his backing of Perdue, but if polls prove accurate and his preferred candidate goes down, the value of the once-coveted Trump endorsement will be further eroded.

Mike Pence, the once-loyal deputy tipped for his own White House run in 2024, amplified his divergence from Trump by rallying for Kemp in Kennesaw on Monday night. “When you say yes to Governor Brian Kemp tomorrow, you will send a deafening message all across America that the Republican party is the party of the future,” Pence said in another stinging rebuke for Trump’s backwards-looking obsession with his 2020 election defeat.

Pence is among a number of senior Republicans who are working to achieve that, however inadvertently. At a conservative conference in Florida in February, Pence said Trump was wrong to think the election could be overturned, and that to try to do so was “un-American”.

Georgia secretary of state: Big lie or not?

The race in Georgia for the hitherto little-known position of secretary of state has assumed national importance as the holder of that post effectively runs the state’s elections – and Georgia is of paramount importance now in presidential elections.

The race on the Republican side is between the incumbent Brad Raffensperger, the Republican who became nationally known for refusing to overturn the 2020 election results, and his Trump-backed challenger and big lie peddler, Congressman Jody Hice.

There has been record turnout during early voting, and polls show a close race between Hice and Raffensperger.

Georgia Senate: How will Herschel Walker do?

One of the biggest Trump-endorsed winners is likely to be the former NFL star Herschel Walker, who is handily placed to win the Republican nomination for senator in Georgia.

Walker is, as journalist Justin Glawe observed in this profile for the Guardian, a relatively rare political being: a Black, Trump-supporting Republican with a base consisting largely of white conservatives.

Already a household name from his years in football, Walker went into the election with an almost certainly unassailable lead, ahead in some polls by more than 55 points, according to Real Clear Politics.

Some Republican opponents have questioned the electability of Walker, a close friend of Trump, according to the Associated Press. He has a history of violence against women and has made multiple gaffes on the campaign trail. He also skipped the primary debates. He has been open about his long struggle with mental illness and acknowledged violent urges.

Texas congressional race: A new leftist or will centrism triumph?

Texas 28 is a heavily gerrymandered, predominantly Latino congressional district that rides the US-Mexico border, including the city of Laredo, before sprawling across south-central Texas to reach into San Antonio.

During the primary election in March, voters there were so split that barely a thousand votes divided the incumbent centrist Democrat Henry Cuellar from insurgent progressive Jessica Cisneros, while neither candidate received the majority they needed to win.

As Alexandra Villarreal wrote for the Guardian: “Now, the runoff has come to represent not only a race for the coveted congressional seat, but also a referendum on the future of Democratic politics in Texas and nationally.

“The House speaker, Nancy Pelosi, House majority whip, James E Clyburn, and House majority leader, Steny Hoyer, have thrown the full-throated support of the Democratic establishment behind Cuellar, while endorsements from progressive icons such as Bernie Sanders, Elizabeth Warren and Alexandria Ocasio-Cortez have elevated Cisneros as a rising star on the national stage.”

Alabama Senate: Can a Republican ditched by Trump still win?

In Alabama Congressman Mo Brooks is looking to show that a Republican can not only survive having the endorsement of Donald Trump taken away, but actually thrive without it.

The rightwing politician was a happy Trump follower but made the mistake of saying it was time to look ahead to future elections and not focus on Trump’s loss in 2020’s election – which Trump falsely says was stolen from him.

That was enough for a furious Trump to pull his backing. But Brooks remains competitive in a race that seems likely to head to a runoff next month, with no candidate winning more than 50%.