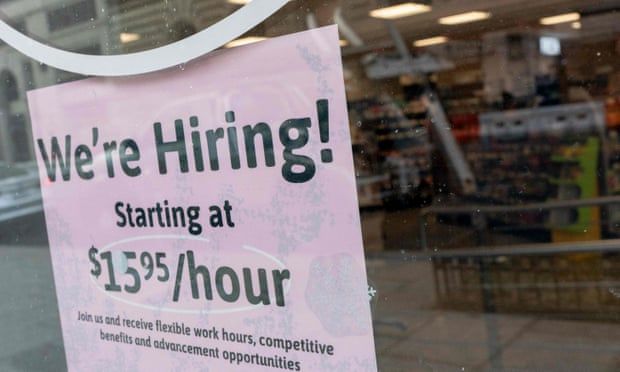 Claims dropped by 28,000 for week ending 19 March as at least a dozen states consider checks to ease burden of inflation
The number of Americans applying for unemployment benefits last week fell to its lowest level in 52 years as the US job market continues to show strength in the midst of rising costs and the pandemic.

Jobless claims fell by 28,000 to 187,000 for the week ending 19 March, the lowest since September of 1969, the labor department reported on Thursday. First-time applications for jobless aid generally track the pace of layoffs.

The four-week average for claims, which compensates for weekly volatility, fell to 211,750 from the previous week’s 223,250.

In April 2020, during the height of the first wave of the pandemic, weekly unemployment claims hit a record 6.6m and they stayed above 1m until August. But the remarkable recovery in the jobs market has coincided with soaring inflation and left many Americans unhappy with the Biden administration’s handling of the economy.

The majority of Americans (58%) surveyed for the latest Grinnell College national poll believe the economy will be worse a year from now and just 37% approve of Joe Biden’s handling of the economy, according to Gallup.

At least a dozen states are considering paying rebate checks of several hundred dollars directly to taxpayers to ease the burden of soaring prices for gas, food, utilities and other essentials.

A proposal from the Maine governor, Janet Mills, is among the most generous in a state where the cost of food and fuel has soared in recent months. The Democratic governor wants to send $850 to most residents as part of the state’s budget bill. The rebate “will help Maine people grapple with these increased costs by putting money directly back into their pockets”, Mills said.

In addition to the direct rebates, lawmakers and governors across the country are considering cuts to sales taxes, property tax relief and reducing or suspending state gas taxes.

Earlier this month, the government reported that employers added a robust 678,000 jobs in February, the largest monthly total since July. The unemployment rate dropped to 3.8%, from 4% in January, extending a sharp decline in joblessness to its lowest level since before the pandemic erupted two years ago.

US businesses posted a near-record level of open jobs in January – 11.3m – a trend that has helped pad workers’ pay and added to inflationary pressures.
#Joe Biden
Add Comment