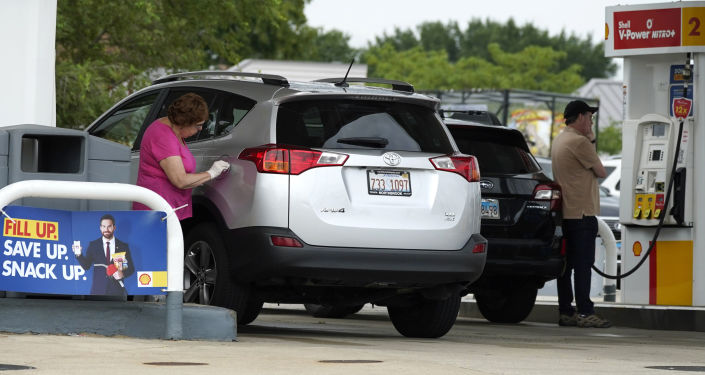 US 'Has Made Clear' to OPEC That Agreement on Reduced Oil Output Must Be Reconsidered, Biden Says

The 13-member Organization of the Petroleum Exporting Countries (OPEC) and its OPEC+ partners, which include other major oil producers such as Russia, agreed to reduce crude oil production last year in the wake of last year's dramatic economic downturn associated with the Covid crisis. Last month, OPEC+ agreed to begin gradually boosting output.

Washington has stressed to the world's major oil producing nations that the production cuts agreed to last year should be scrapped as nations begin to recover and their demand for energy grows, President Joe Biden has said.

"We also made clear to OPEC, the major oil exporting nations of the world, that the production cuts made during the pandemic should be reversed as the global economy recovers in order to lower prices for consumers," Biden said, delivering remarks on his 'Build Back Better' agenda in Washington on Wednesday.

The president spoke about putting pressure on OPEC while addressing his administration's strategy of "taking action" on gas prices, suggesting that although fuel prices "are lower than they were earlier in this decade...they're still high enough to create a pinch on working families."

Biden also indicated that his director of the national economic council had asked the chair of the federal trade commission "to use every available tool to monitor the US gasoline market" for any potential "illegal conduct that might be contributing to price increases at the pump while the price of oil is going down."

Earlier in the day, National Security Advisor Jake Sullivan issued a statement in which he said that high gas prices, "if left unchecked, risk harming the ongoing global recovery," and indicated that crude prices are higher now than they were before the start of the coronavirus-associated crisis.

"While OPEC+ recently agreed to production increases, these increases will not fully offset previous production cuts that OPEC+ imposed during the pandemic until well into 2022. At a critical moment in the global recovery, this is simply not enough," Sullivan suggested.

"Although we are not a party to OPEC, the United States will always speak to international partners regarding issues of significance that affect our national economic and security affairs, in public and private," the NSA added. Sullivan noted that Washington was now "engaging with relevant OPEC+ members on the importance of competitive markets in setting prices." He did not mention specifically which countries US officials were speaking to.

Earlier Wednesday, a source from an unnamed nation's OPEC+ delegation told Sputnik that the oil-producing bloc had not yet discussed Washington's demands for increased output, but added that consultations on the matter would not be ruled out.

Agreement on Cuts to Last Through 2022

Last month, OPEC+ formally agreed to keep the oil production cut deal reached in the spring of 2020 in place until the end of 2022, allowing for production to be increased by 400,000 barrels per day (bpd) every month starting in August until the currently agreed upon total of 5.8 million bpd in cuts is exhausted. OPEC+ officials plan to meet in December to "assess market developments and participating countries' performance," and have also agreed to continue monthly meetings to "assess market conditions" and production adjustments.

In early 2020, Saudi Arabia began a brief crude price war against other producers after its efforts to ram through a major cut in output was rejected by other OPEC+ partners, chiefly Russia. The conflict led to a historic glut which saw demand drop through the floor and futures temporarily dip into negative territory, but was resolved after producers reached a compromise solution on necessary cuts in April 2020. The United States, which is not a member of OPEC+, thanked Russia and Saudi Arabia for coming to an agreement, and helped the oil producing-bloc bring a reluctant Mexico into the agreement on cuts.