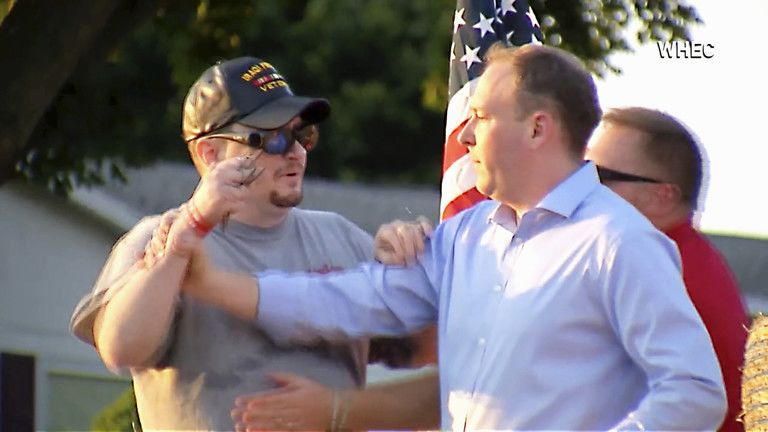 US congressman’s attacker released without bail

The suspect, David Jakubonis, was charged with attempted assault in the second degree and released from jail on Friday without being required to pay any bail. His release came hours after the 43-year-old US Army veteran charged US Representative Lee Zeldin, the Republican candidate for governor of New York, and tried to stab or slash him with a double-pointed weapon.

“It is terrible public policy that in the state of New York, you can try to stab a sitting member of Congress – or anyone else for that matter – and be back out on the street not even six hours later,” said Katie Vincentz, a spokeswoman for Zeldin. “There is not enough accountability for people when they commit crimes, and this is just one of the many examples we hear all about in New York every single day.”

Video footage of the incident, which took place on Thursday night near Rochester, showed Zeldin grabbing the man’s arm as he raised the weapon toward his neck. Jakubonis was pulled to the ground as several men came to Zeldin’s aid. The Republican candidate, who finished his speech after Jakubonis was arrested, is running against incumbent Governor Kathy Hochul, a Democrat.

Apparently, because the attacker didn’t succeed at stabbing Zeldin, the assault was categorized as a nonviolent offense under New York law. Legislation passed in 2020 prohibits judges in the state from requiring defendants to pay bail in such cases, meaning they must be let out of jail while awaiting trial.

“Only in Kathy Hochul’s New York could a maniac violently attack a candidate for governor and then be released without bail,” Nick Langworthy, the New York Republican Party chairman, wrote on Twitter. “This is what happens when you destroy the criminal justice system.”

New York has been plagued by rising crime over the past two years, including a surge in apparently unprovoked assaults on pedestrians, especially Asians, in New York City. In many of those cases, the suspects had been arrested dozens of times previously and let back out on the street. Robberies, felony assaults, and rapes have climbed further so far this year, rising by 39%, 19%, and 11%, respectively, from 2021’s pace, according to police data.
Add Comment