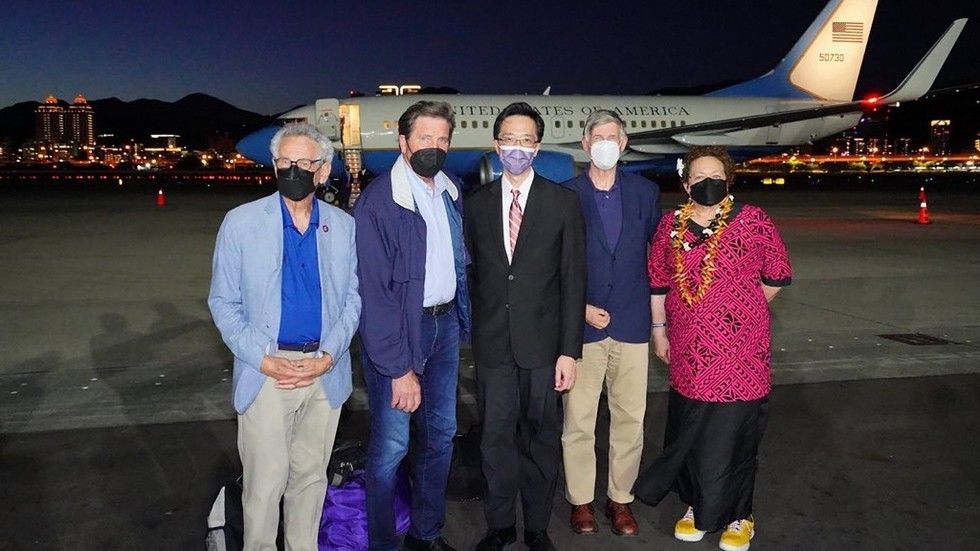 US congressional delegation arrives in Taiwan amid historic tensions with China

A US congressional delegation touched down in Taiwan on Sunday for a two-day visit. The lawmakers’ arrival comes less than two weeks after a separate visit by House Speaker Nancy Pelosi sparked a flurry of military activity in the Taiwan Strait and sent relations between Washington and Beijing into a tailspin.
The visit to Taipei was announced by the American Institute in Taiwan, which functions as the US’ de-facto embassy on the self-governing island. According to the institute, Massachusetts Senator Ed Markey, a Democrat, is leading the group. Democrat Representatives John Garamendi (California), Alan Lowenthal (California), and Don Beyer (Virgina) are accompanying Markey, as is Rep. Aumua Amata Coleman Radewagen, a Republican from American Samoa.

The US officially recognizes, but does not endorse, China’s sovereignty over Taiwan, a position referred to as the ‘One China’ policy. While American lawmakers and officials regularly travel to the island, Beijing considers visits by more senior US figures to be tacit endorsements of Taiwanese independence.

Such was the case when Pelosi traveled to Taiwan earlier this month. Beijing perceived a visit by the second person in the line of presidential succession and a member of the same political party as President Joe Biden as a violation of the One China principle by the highest levels of power in Washington.

The visit was described by Chinese Foreign Minister Wang Yi as “a complete farce,” with Wang adding that “those who offend China will be punished.”

China responded to Pelosi’s visit by holding “unprecedented” military exercises in the Taiwan Strait and severing trade links with Taipei. Beijing also sanctioned Pelosi’s family and cut diplomatic ties with the US in a number of key areas, including climate change, maritime security, and other military sectors.

China declared on Saturday that it had “successfully completed” its military exercises, but would continue “military training and preparation” to defend its “national sovereignty and territorial integrity.” The drills wrapped up shortly after the Chinese government released a white paper stating that it would strive for a peaceful reunification with Taiwan but would not renounce the use of force to achieve this goal if necessary.

Meanwhile, the US is holding joint exercises in Indonesia with the Australian, Japanese, and Singaporean forces, while the Pentagon announced last week that the US Navy will conduct “air and maritime transits” through the Taiwan Strait in the coming weeks, while the USS Ronald Reagan Carrier Strike Group will remain stationed in the region.
#Joe Biden
Add Comment