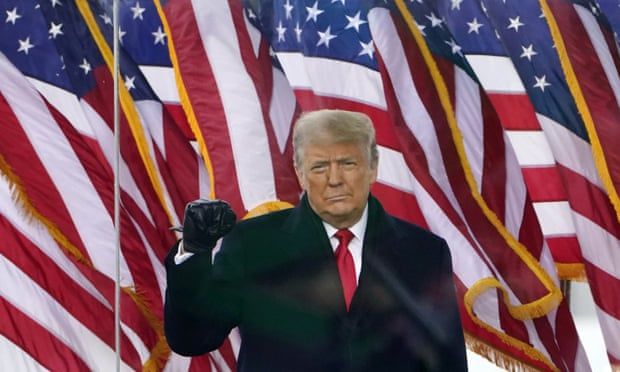 Court filing says public hearings will address ‘in detail’ Trump’s legal culpability for obstructing Congress and defrauding the US
The House select committee investigating the Capitol attack is hoping to show through public hearings in April how it believes Donald Trump came to violate federal laws in his efforts to overturn the 2020 US election results, the panel has indicated in court documents.

The hearings are set to be a major and historical political event in America as the panel seeks to publicly show the extent of its investigations so far into the shocking events that saw a pro-Trump mob invade the Capitol in an attempt to stop the certification of the election of Joe Biden by Congress.

The panel alleged in a court filing on Wednesday that Trump and his associates obstructed Congress and conspired to defraud the United States on 6 January, arguing it meant the former Trump lawyer John Eastman could not shield thousands of emails from the inquiry.

But the public hearings – which are likely to come late next month, the chair of the select committee, Bennie Thompson, told the Guardian – will address just how Trump came to interfere with the joint session of Congress through rhetoric he knew to be false or unlawful.

“The president’s rhetoric persuaded thousands of Americans to travel to Washington for January 6, some of whom marched on the Capitol, breached security, and took other illegal actions. The select committee’s hearings will address those issues in detail,” the filing said.

The panel also said in its court submission that the public hearings would address how Trump appeared to lay the groundwork for his rhetoric inciting the Capitol attack by promoting claims of election fraud in the 2020 election that he had been told were without merit.

“Despite being repeatedly told his allegations of campaign fraud were false, the President continued to feature those same false allegations in ads seen by millions,” the filing said. “The select committee will address these issues in detail in hearings this year.”

The select committee indicated the public hearings would serve as the opportunity to cast a light on Trump’s secret efforts to overturn the election, from his attempts to pressure the then vice-president, Mike Pence, to return him to office, to abuse of the justice department.

“We want to paint a picture as clear as possible as to what occurred,” Thompson told reporters on Capitol Hill on Thursday. “The public needs to know what to think. We just have to show clearly what happened on January 6.”

Thompson said that the select committee has witnesses who have volunteered to testify before the panel in public hearings, though he did not specify whether they included former Trump administration officials or Capitol attack rioters who had been charged.

The clues as to what the panel will address in the much-anticipated public hearings, which will precede an interim report of its findings, came in a filing in which the select committee said for the first time they believed Trump had engaged in criminal activity.

The Guardian first broke the news earlier this year that the select committee was investigating whether Trump oversaw a criminal conspiracy that connected the “political elements” of his scheme to return himself to office with the violence perpetrated by far-right militias.

The fact that the panel said it had evidence of criminality does not mean House investigators will ultimately refer Trump to the justice department for prosecution. But its inclusion in the brief suggested the panel thinks it has sufficient materials to convince a judge.
#Donald Trump  #Joe Biden

Virgil 119 days ago
The more the Demoncrat commies go after Trump, the more I support him. Most of my fellow US citizens who vote agree.
View all comments (1)Add comment