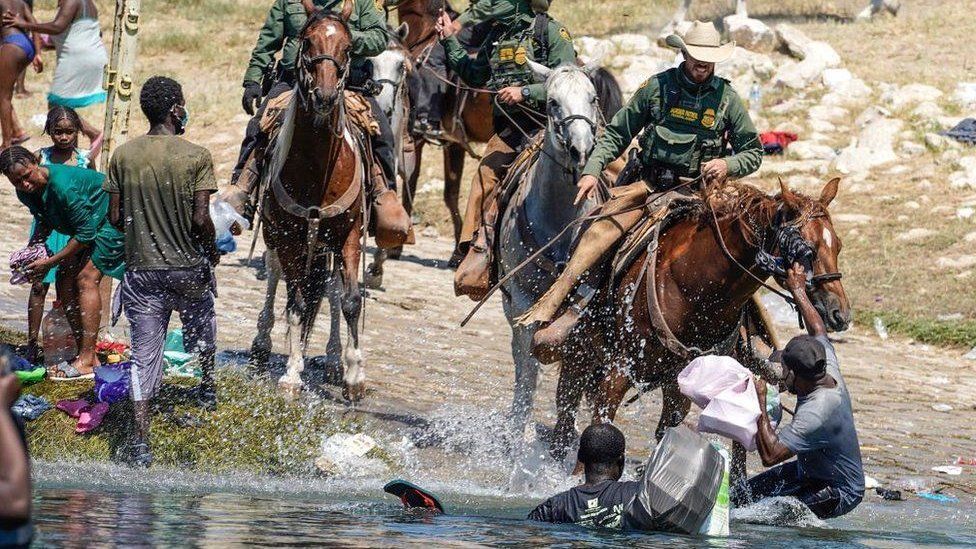 The US border agents on horseback who charged upon Haitian migrants last year used "unnecessary" force, a federal border control agency has found.
The incident, which saw riders threaten migrants and force them back into the Rio Grande River in Texas, had sparked comparisons to America's slavery era.

The prolonged probe had been criticised for its slow pace, which investigators blamed on a lack of access to official communications.

In its findings released on Friday, CBP did not recommend any of its officers be fired but acknowledged "failures to make good decisions at multiple levels of the organisation".

"Failures to maintain command and control over Horse Patrol Units, lack of appropriate policies and training, and the overall chaotic nature of the situation at Del Rio at the time contributed to the incident," CBP Commissioner Chris Magnus said in a statement.

"Several agents engaged in unprofessional or dangerous behaviour, including one instance in which an agent used denigrating and offensive language," he continued.

Mr Magnus added that his agency has already begun to revise its practices, training and operational methods with regard to the incident, including by limiting the use of horse patrols.

The 19 September 2021 incident took place as agents on horse patrol were deployed to help turn back a surge of migrants crossing an international bridge in Del Rio.

Pictures taken by AFP photographer Paul Ratje showed Haitians going back and forth across the border to get food for their families, and finding themselves blocked by the horses.

The images, which were widely shared online, appeared to show some of the mounted men on patrol whipping migrants with their reins.

Officials rejected that particular claim however, and also added there was "no evidence that any migrants were forced to return to Mexico or denied entry" to the US.

Investigators looked into the actions of a handful of agents over a 30-minute time span and also spoke with attorneys for 11 asylum-seekers involved in the event, but did not speak directly with migrants.

Earlier this year, prosecutors in Texas declined to file criminal charges against agents involved in the encounter.
Add Comment