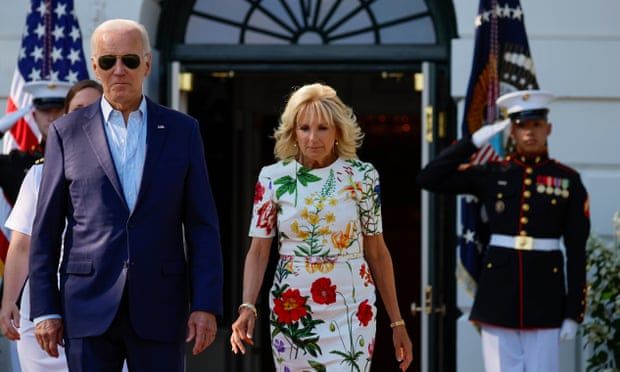 Former top army spokesperson Gary Volesky, who retired as a lieutenant general and earned a silver star for gallantry while serving in Iraq, was making $92 an hour advising military officers, staff and students who were taking part in war games and other similar activities.

But then a Twitter account under his name replied to a statement from Biden that condemned the supreme court’s decision on 24 June to reverse its landmark 1973 ruling in Roe v Wade which had established federal abortion rights.

“For nearly 50 years, women have had the right to make our own decisions about our bodies,” the Democratic first lady’s statement said about the ruling, which in effect outlawed abortions in more than half the country. “Today, that right was stolen from us.”

An account under Volesky’s name replied: “Glad to see you finally know what a woman is.” Some on the platform interpreted the remark as a verbal potshot at the Biden White House’s support for the transgender community.

On Saturday, an army spokesperson said the commander of the military branch’s combined arms center, Lt Gen Theodore Martin, had suspended Volesky from his consultancy pending an investigation into whether the tweet in question violated decorum rules for retired officers.

USA Today was the first to report on Volesky’s suspension, which marked the latest disciplinary action against a relatively prominent military figure to make the news. Some observers – including the liberal news outlet Axios – regarded the suspension as unusual because the nation’s military officials try to avoid wading into partisan political disputes.

Before retiring in 2020, Volesky was in charge of US ground forces in Iraq and headed the army’s famed 101st Airborne Division, which is perhaps best known for being at the tip of the spear during the invasion of Normandy in the second world war.

He earned the silver star – the US military’s third-highest honor for valor – for his actions in 2004 after his battalion came under attack in an area of greater Baghdad. The ensuing 80-day battle left eight soldiers killed and 50 others wounded.

Volesky, who served in Afghanistan as well, was also the army’s public affairs chief during his 36-year career with the military branch.

The tweet under Volesky’s name to Biden was not the only one aimed at a woman in politics. When the Wyoming Republican representative Liz Cheney announced that she would serve on the congressional committee investigating the January 6 attack on the Capitol, a tweet in Volesky’s name disputed her claim that the panel’s work would “be above partisan politics”.

“This is all about partisan politics,” said a reply in Volesky’s name.
#Afghanistan
Add Comment