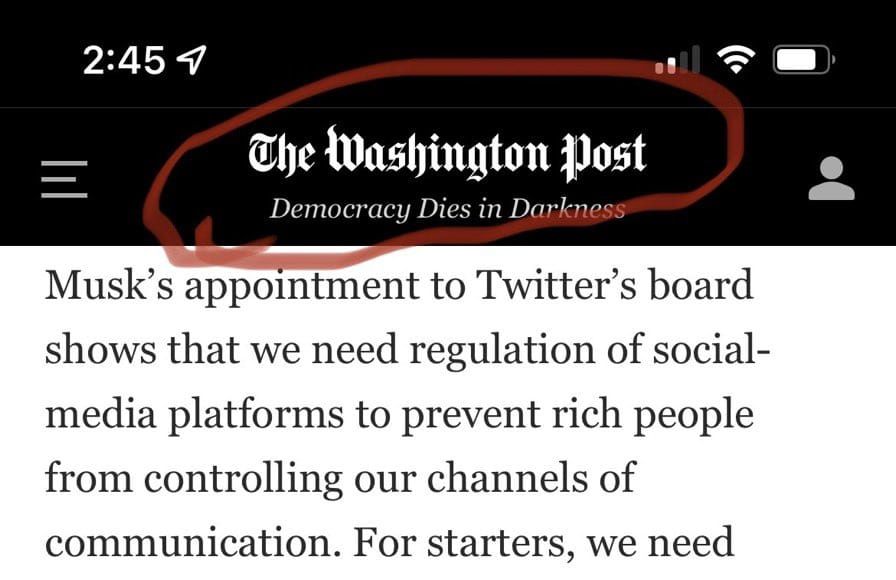 “Musk’s appointment to Twitter’s board shows that we need regulation of social-media platforms to prevent rich people from controlling our channels of communication.”

Okay, bro ... I totally support the idea that all of the media in the world should be controlled only by poor people.
I love this refreshing idea, mainly because the fact that they have no money definitely proves that at least they are honest, decent people ... Indeed, it’s true to say that the modern media has not been characterised by integrity and fairness because  big money corrupts the media just as it corrupts politics.
Jeff and Elon, my dear friends, it’s time to update the Post slogan
"Democracy doesn’t die in darkness." to "Democracy dies in hypocrisy!".
And it would be nice to make Twitter democratic again, just as it used to be before money corrupted its soul.
However,  we should not generalise our opinion and simply view all the media as one. That would be neither fair nor true. There are many perfectly honest journalists  out there doing a fantastic job and providing a great service to humanity. Unfortunately the well-known saying about lawyers could now also be attributed to the "profession" of  journalism: ‘Not everyone in the media is a crook. It’s only the 99% who give a bad name to all the rest’…
Not yet quite as bad as 99%, but no longer at the minimum democracy needs to survive.
#Elon Musk
Add Comment