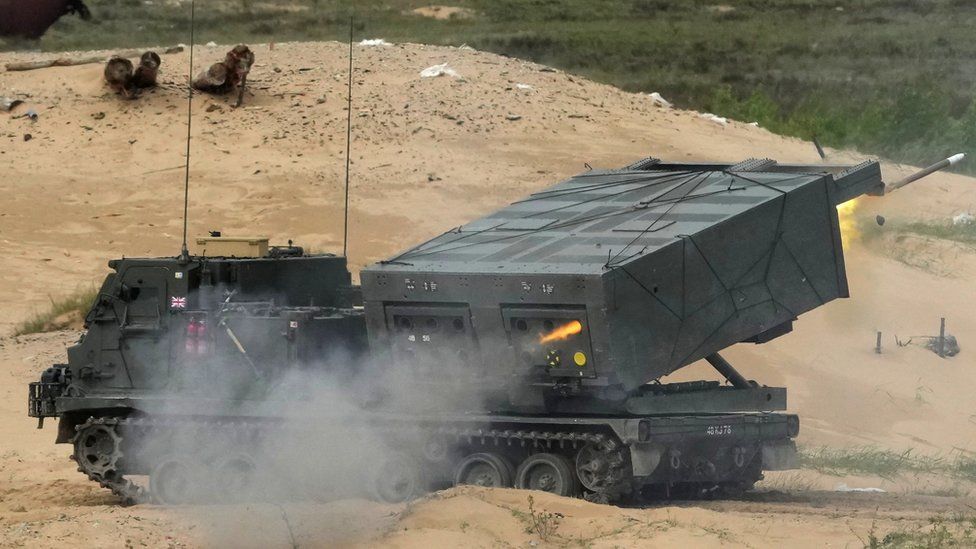 The UK is sending its first long-range missiles to Ukraine, the defence secretary has said, despite a threat from Russia to the West.

The government has not confirmed how many weapons will be sent, but the BBC understands it will be three initially.

The decision comes after the US announced last week it was also supplying a rocket system.

The move by the US to send its own M142 High Mobility Artillery Rocket System (HIMARS) has already angered Moscow and on Sunday Russian President Vladimir Putin threatened to expand the list of targets Russia will attack in Ukraine in response.

The UK government said the Ukrainian military will get training in the UK on how to use the launchers.

The multiple-launch rocket system can fire 12 surface-to-surface missiles within a minute and can strike targets within 50 miles (80km) with pinpoint accuracy - far further than the artillery Ukraine currently possesses.

Mr Wallace said the UK was taking a leading role in supplying Ukrainian troops with the "vital weapons they need to defend their country from unprovoked invasion".

He said: "As Russia's tactics change, so must our support to Ukraine.

"These highly capable multiple-launch rocket systems will enable our Ukrainian friends to better protect themselves against the brutal use of long-range artillery, which Putin's forces have used indiscriminately to flatten cities."

The UK and US have led the way in supplying weapons to Ukraine, but giving it advanced long range rockets marks a significant shift, said the BBC's defence correspondent Jonathan Beale.

It is also a recognition that Ukraine is struggling to compete against Russia's vast artillery arsenal, he added.

Last week, Washington said it would supply four HIMARS multiple rocket launchers to Ukraine - following receipt of guarantees they would be used for defensive purposes only and not to strike targets inside Russia. The same restriction applies to the use of the UK's M270 system. 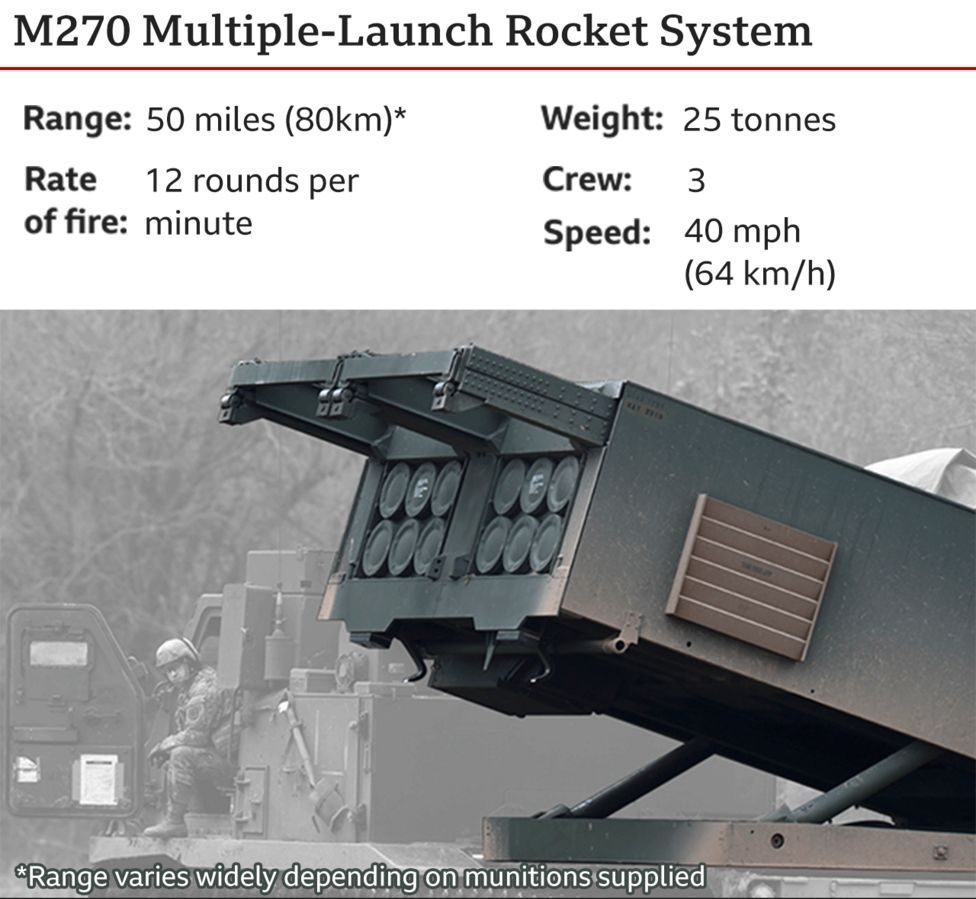 In an interview on Russian state TV on Sunday, Mr Putin said: "In general, all this fuss about additional arms supplies, in my opinion, has only one goal - to drag out the armed conflict as long as possible."

The Russian leader said that if missiles with longer ranges did arrive in Ukraine, his country would "draw appropriate conclusions" and "strike at those targets that we are not striking yet".

The warning came as explosions shook parts of Kyiv on Sunday in the first assault on the capital city for weeks, while fierce fighting for control of key towns and cities in the eastern Donbas region continues.

Russia refocused its military efforts on the Donbas at the end of March after pulling back from the Kyiv region.

Some of the fiercest fighting is currently in the eastern city of Severodonetsk. Capturing the city would deliver the Luhansk region to Russian forces and their local separatist allies, who also control much of neighbouring Donetsk. The two regions form the heavily industrial Donbas.

On Sunday, Ukraine's president, Volodymyr Zelensky, said he had visited front-line troops in the eastern Donbas region to the city of Lysychansk and the town of Soledar. 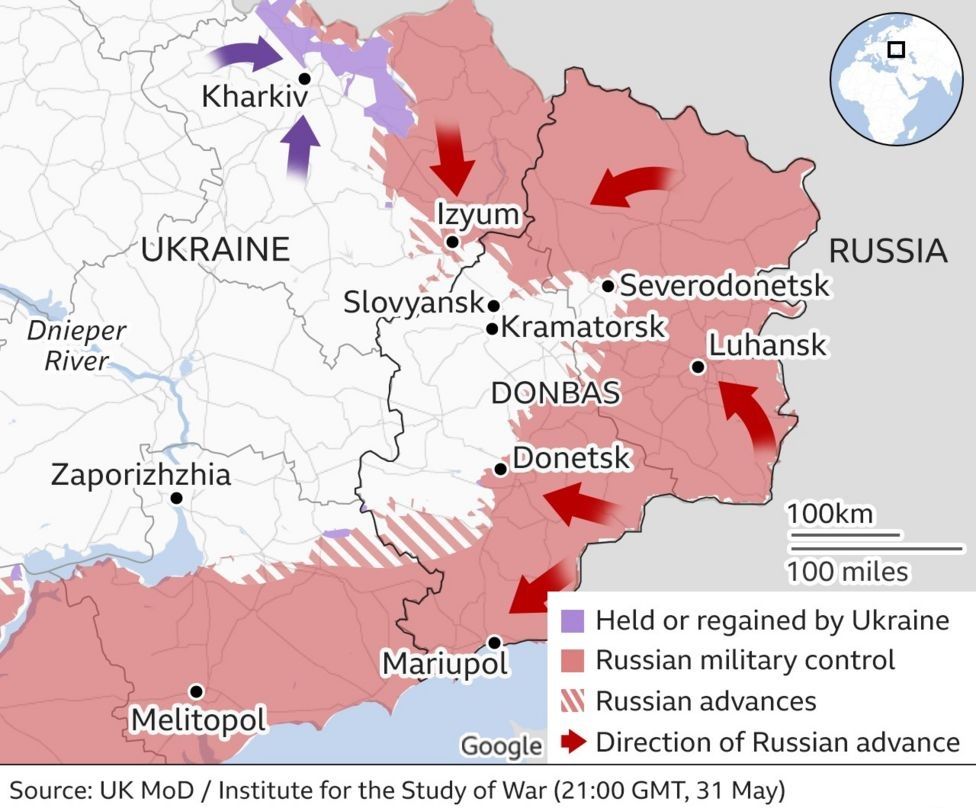 The UK has also delivered more than 5,000 next generation light anti-tank weapons - known as Nlaw - which analysts believe have been critical to Ukraine driving back Russian ground assaults since the war began.

Several other countries have pledged to send advanced weapons to Ukraine. Germany has promised to send its most modern air defence system - the Iris-T - to enable Ukraine to shield an entire city from Russian air attacks.

Meanwhile, a specialist team of lawyers and police officers will be offered to assist the chief prosecutor investigating alleged Russian war crimes in Ukraine, the Justice Secretary Dominic Raab announced on Monday.

The offer will include a Metropolitan Police officer stationed in the International Criminal Court in The Hague, in the Netherlands - who will provide the ICC's prosecutor Karim Khan with greater access to British police and military expertise.

Seven lawyers experienced in international criminal law will be offered to help uncover evidence of war crimes committed in Ukraine and prosecute those responsible.

The ICC has already begun an investigation that may target senior Russian officials thought to be responsible for war crimes, crimes against humanity or genocide.

Oh ya 234 days ago
You are watching the start of a world war. It is against the NAZIS in Ukraine and Russia who lost over 20 million people in WWII fighting NAZIS. The west is on the Nazi side now because they need a war to cover for their collapsing economy. If the NAZIS had followed the Minsk agreement signed in 2014 non of this would be happening. If Putin thinks he is losing he will nuke America on his way down. You can thank slow joe if this happens
View all comments (1)Add comment