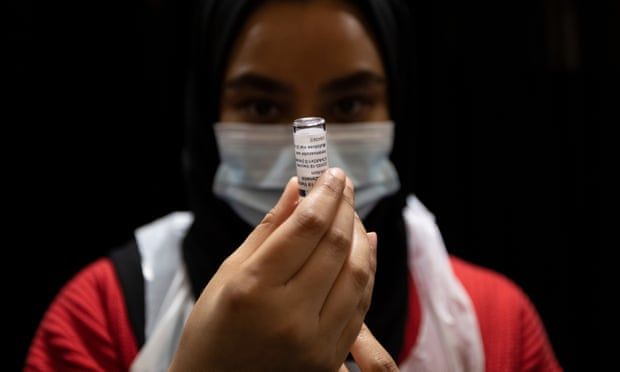 One of the UK’s leading scientists has called on the prime minister to donate 20% of the UK’s Covid vaccines to other countries in an effort to try to save lives and stem the spread of coronavirus variants.

The head of the Wellcome Trust, Sir Jeremy Farrar, and the executive director of Unicef UK, Steven Waugh, have published an open letter to Boris Johnson appealing for the UK to set an example ahead of the G7 summit in Cornwall, which begins in a week’s time.

UK science played a core part in “breathtaking advances” that have enabled vaccines to be developed, which is the way out of the pandemic, they say in their letter.

“At home, the UK vaccination rollout has been a phenomenal success and has already saved countless lives,” they write. “Yet, globally too many countries still lack doses to protect healthcare workers and the most vulnerable.

“As president of the G7, the UK has the opportunity to set the standard for global action on sharing doses. Three months ago, you proudly pledged that the UK would share vaccines with the world. Now we ask that you turn this pledge into reality.”

The UK should “show the historic leadership needed to end this crisis”, they say. It should share at least 20% of the vaccines it has between now and August and call on the G7 nations to commit to sharing 1bn doses this year. The G7 should also fully fund the Access to Covid-19 Tools (ACT) Accelerator, which is a partnership involving the World Health Organization to speed up the development of vaccines, tests and treatments and ensure all countries can access them.

“We can share vaccines now and still meet UK vaccination targets,” they write. “The truth is, the UK cannot afford not to share its vaccines. The world won’t be safe while any single country is still fighting the virus. Failing to act now risks reversing our hard-won progress.”

It is the best way to protect the UK and end the pandemic quickly, they say: “As long as the virus continues to circulate, it will continue to mutate. We have already seen first-hand how quickly new variants can emerge and travel. We cannot rule out variants against which our vaccines and treatments no longer work.”

Covax, the UN scheme to distribute vaccines equitably, is 190m doses short of what it needs for this year. The UK has ordered more than 400m vaccine doses. Johnson told a virtual G7 meeting in February that the UK would donate its surplus to poorer countries, but has not said when or how many doses that would involve.