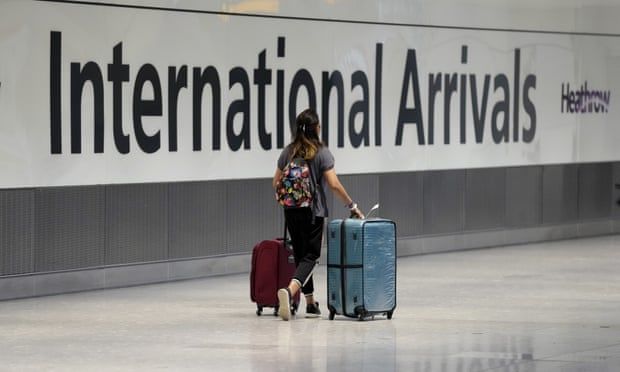 Remaining rules including mandatory passenger locator forms and tests for unvaccinated arrivals will end Friday
All remaining Covid travel restrictions are to be dropped across the UK from later this week, despite a concerning rise in cases and hospitalisations.

Ministers approved the scrapping of passenger locator forms and the requirement for all unvaccinated arrivals to get tested, with the changes to come into force from 4am on Friday.

Quarantine hotels, which have not been used since the “red list” of countries was emptied in December but have been kept on standby, will also be fully stood down from the end of March.

Tory MPs and the aviation industry had put pressure on the government to make the move before April, given all domestic restrictions have already been repealed.

Announcing the change, the transport secretary, Grant Shapps, said on Monday it would “mean greater freedom for travellers ahead of the Easter holidays”.

The decision will be welcomed by the travel industry. On Monday, Heathrow announced that air passengers travelling through the airport will no longer be required to wear a mask from Wednesday. British Airways and Virgin Atlantic said they were also preparing to drop the requirement onboard, when flying to destinations that do not require face coverings on planes.

Heathrow said it would still strongly encourage people to continue to wear masks at the airport, in recognition that the pandemic was not over, but it would no longer be a firm requirement – mirroring the practice around UK transport.

BA and Virgin said rules would depend on the destinations with masks required on many routes, including to the US until at least 18 April. Virgin flights to the Caribbean from both Heathrow and Manchester will see optional mask-wearing.

It comes as Britain’s Covid situation deteriorated further, with health officials concerned that the number of people being hospitalised with the virus was also growing at a fast rate.

Boris Johnson’s spokesperson on Monday insisted there was no need for any fresh restrictions to help curb the spread of the virus.
Advertisement

He said the prime minister was “keeping a close eye on the data” but that “at the moment, we don’t see anything nearing any of the sorts of pressures we saw at the peak of the pandemic, when such large proportions of the population weren’t vaccinated or boosted”.

He added: “We obviously will always have contingency plans, but the prime minister and others have talked about how the vaccination and our therapeutics mean we will not need to return to the lockdowns of the past that saw such significant measures be necessary.”

The health secretary, Sajid Javid, also said the UK was in a “very good position” given the take-up of vaccines, and that a rise in infection rates was to be expected.

In a bid to appease those concerned about the dropping of border measures, he vowed: “We will continue monitoring and tracking potential new variants, and keep a reserve of measures which can be rapidly deployed if needed to keep us safe.”

The Department for Transport said that the “default approach will be to use the least stringent measures” and that contingency measures “will only be implemented in extreme circumstances”.

Last month, Johnson significantly loosened remaining Covid restrictions, announcing that those with the virus were no longer required to isolate and that free mass testing would end from 1 April.