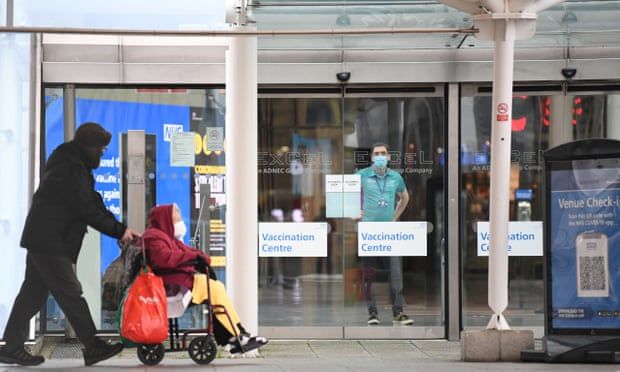 Boris Johnson and Rishi Sunak said to have agreed to decision not to follow public health advice on testing in vulnerable settings
Public health advice is no longer being followed under Boris Johnson’s “living with Covid” strategy to end mass testing, senior civil servants have acknowledged in a leaked account of a cross-Whitehall briefing.

The briefing by a senior member of the Covid taskforce was delivered to civil service leaders across Whitehall on Thursday afternoon, making clear that following public health advice was no longer the sole priority.

The senior official said public health advice would not be met in NHS or social care settings in relation to the testing of staff, and that was a “decision that the PM, chancellor and indeed the cabinet have agreed to”.

On the call, he said: “It will be the case from 1 April that testing in DH own settings including the NHS and adult social care will not fully match the public health advice because of spending considerations. We will not be testing adult social care staff or NHS staff at the frequency recommended by clinicians because there is not the funding to pay for it.”

Johnson has repeatedly stressed throughout the pandemic that he would “follow the science” and listen to his public health experts. However, that appears to have ended with the “living with Covid” strategy, which set out a timetable for winding down testing and scrapping mandatory isolation.

The government has not published its public health advice from the UK Health and Security Agency but it is understood its advisers did not recommend winding down testing unless the prevalence of Covid was at a low level in the UK and that the pandemic was in a “steady state” near to endemicity. The government’s experts do not believe that state has currently been reached.

Chris Whitty, the chief medical officer, and Patrick Vallance, the chief scientific officer, stood beside Johnson in a press conference as he announced the strategy but they struck a much more cautious note, urging people to carry on washing their hands and wearing face masks in enclosed spaces.

The strategy to end mass testing was published after a row between Sajid Javid, the health secretary, who wanted up to £5bn more for testing, and Rishi Sunak, the chancellor, who insisted there would be no more cash after spending £15bn over the last year.

The strategy ends most symptomatic and all asymptomatic testing for the general population, as well as for NHS staff. It will be decided over the next month whether very elderly people and some vulnerable people will get free lateral flow tests if they are symptomatic. Medical settings should also get access to testing for symptomatic patients and care home residents as well as symptomatic social care staff.

In the briefing, civil service officers were told there would not be additional funding from the Department of Health and Social Care (DHSC) or the UK Health and Security Agency (UKHSA) to cover testing in vulnerable settings overseen by their departments where there was a risk of outbreaks.

This could include settings such as prisons, schools, children’s homes, detention centres, accommodation for asylum seekers and homeless shelters. Cabinet ministers will in future have to decide whether their budgets can stretch to additional testing in their areas and the senior civil service officials from departments across Whitehall were advised there was no expectation in future that they would follow public health advice in full.

The senior official told them he was sure there would be “plenty of other areas across government where ministers decide on balance the funding does not exist to follow the public health advice in full when it comes to recommended testing protocols.”

A senior official on the Treasury Covid response was also present at the meeting, spelling out that it was considered acceptable for the public health advice on testing not to be followed in vulnerable settings. “Ministers [the prime minister, chancellor and chancellor of the duchy of Lancaster] are not expecting to be continuing testing in these types of setting in the main,” she said.

Civil service officials on the call raised concerns that departments would find it difficult to make decisions about matters of public health on their own, weighing them up against financial considerations. There was also a worry that the costs of testing would have to continue to be absorbed by departmental budgets even if there were a new variant or spike.