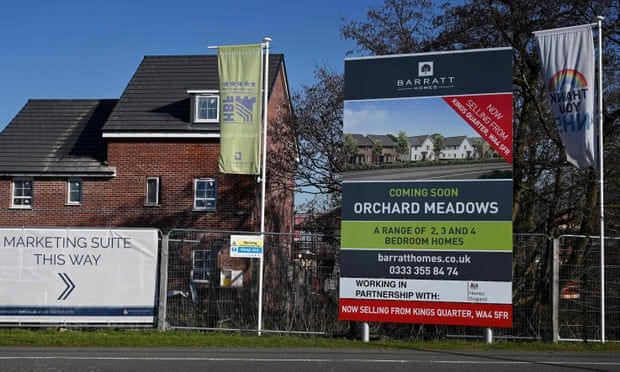 In areas of high demand, even the most knocked-about and idiosyncratic houses are spending just days on the market once buyers, desperate to grab something, see that predictions of a house price crash are proving off the mark.

“Homes that look like the last turkey in the Christmas shop window are flying off the shelves at the moment,” said property agent Henry Pryor.

While the property merry-go-round screeched to a temporary halt during the first lockdown early last year, the pause did not last. With sales barely slowing over the summer, the data is clear: along with technology, real estate has emerged as one of the pandemic’s boom sectors.

Andrew Wishart, property economist at consultants Capital Economics, said: “With the amount of secondhand stock on the market currently extremely limited, house prices could continue to surprise on the upside.”

There is always the possibility that places like Cornwall and towns along the south coast are in a bubble and prices are about to burst, said Pryor, “but the banks and local agents seem convinced that the momentum will keep prices on the up for a long time yet”.

Mortgage lender Nationwide said its measure of annual house price increases chalked up its second-biggest monthly rise in 15 years in August, putting to bed fears that the end of the government’s stamp duty tax break, which prompted a fall in the number of homes changing hands during July, would bring the market to a juddering halt.

Prices were up 11% on a year ago, said Nationwide, and remain about 13% above pre-pandemic levels, according to official data.

Adding to the feverish activity, which has seen some English agents adopt the well-worn Scottish system of sealed bids amid claims of gazumping, new home builders have battled steel and timber shortages and an exodus of staff following Brexit to construct new homes. Many have seen their profits soar.

Britain’s biggest homebuilder Barratt Developments reported a near doubling of profits over the last year to £812m on Thursday, and said viewing requests for new homes over the next six months were “strong”.

While homeowners may cheer rising prices, the charity Housing Justice said the boom encouraged private landlords to sell up and leave tenants looking for another place to live, and would only add to the longstanding problems facing homeless people and those in the private rented sector.

Wishart said the end of the furlough scheme on 30 September, which is expected to push unemployment higher, posed only a small risk to rising prices.

“The end of the repossessions ban and closure of a mortgage payment holiday scheme had “failed to trigger an increase in homeowner distress,” he said, adding that the only trap-door for prices was an interest rate rise by the Bank of England, which at the moment seems far in the distance.

In May 2020, it was a very different story. The first lockdown meant buyers could no longer view properties except online, sellers took their homes off the market and sales collapsed.

Two months later Rishi Sunak responded to calls for government support by extending the help-to-buy scheme for first-time buyers and cutting stamp duty on homes worth less than £500,000.

Figures for August 2020 revealed a spectacular turnaround. Mortgage approvals jumped from 66,300 in July to 84,700, according to Bank of England figures, their highest level since October 2007.

Recent analysis of the government’s actions by the Resolution Foundation thinktank argued that the £4bn stamp duty subsidy was wasted on sparking a market to life that had already begun to recover and was always going to enjoy stellar growth.

It said ultra low interest rates, the demand for more spacious properties during the pandemic and the pent up savings of those kept in work by the furlough scheme was enough to spur buying activity without extra incentives from the Treasury.

“It’s true that when the first lockdown was eased, most property analysts were gloomy about the prospects for the market, thinking people would hunker down,” said Pryor. “But by June 2020 it was clear that the British obsession with location, location, location was alive and kicking, it was just they now wanted a different location.”
#Coronavirus  #COVID-19  #Covid
Add Comment