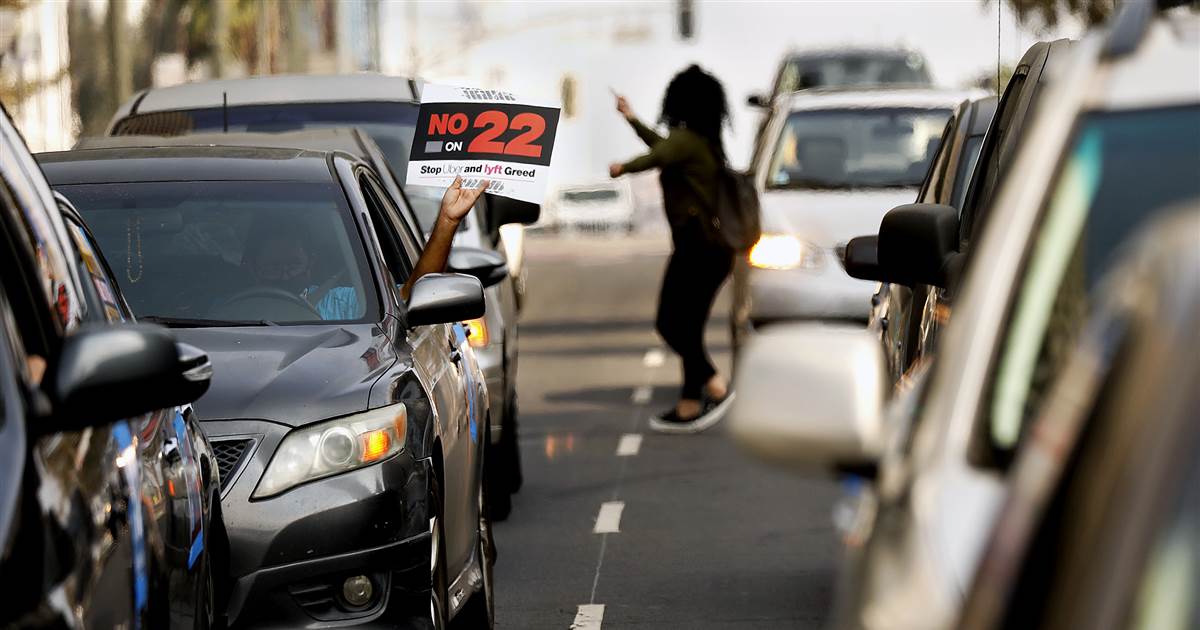 The proposition would allow drivers for app-based transportation and delivery companies to be classified as independent contractors in many circumstances.

California voters decided Tuesday that Uber and Lyft should be exempt from state labor law that aimed to make their drivers employees rather than contractors, according to projections from NBC News.

Voters made the call on California’s Proposition 22, a ballot measure that essentially became one of Uber and Lyft’s last hopes in the state to continue their operations under the status quo.

The proposition would allow drivers for app-based transportation and delivery companies to be classified as independent contractors in many circumstances. While that would disqualify them for benefits granted to employees, the measure also entitles drivers to new benefits like minimum earnings and vehicle insurance.

Several gig economy apps backed the measure, including Uber, Lyft, DoorDash, Instacart and Postmates, which Uber is acquiring. The support from these companies helped raise nearly $203 million to back the measure, while opponents raised less than $20 million, according to tallies compiled by Ballotpedia.

Democratic presidential nominee Joe Biden opposed the measure. Biden tweeted in May that Californians should vote no on the initiative and said, “gig economy giants are trying to gut the law and exempt their workers. It’s unacceptable.”

Now, gig economy giants are trying to gut the law and exempt their workers. It's unacceptable.

I urge Californians to vote no on the initiative this November.

While Uber and Lyft were able to raise gobs of cash from venture capitalists while private and have multi-billion dollar valuations on the public market, neither has reached profitability. That makes the contractor-driver model especially important to the businesses, allowing them to avoid costly benefits associated with employment, such as unemployment insurance.

The companies have warned they’d likely have to pass on increased costs of worker reclassification to consumers. Uber estimated in a blog post earlier this year that it would have to raise rider prices between 25 percent and 111 percent in parts of California to cover the costs.

The New York Times reported in August that both companies were considering a fleet-like model, similar to traditional taxis. Under that model, the companies would license their brands to operators like a franchise, according to the Times.

The proposition has significant implications for DoorDash and Instacart as well, both of which are reportedly preparing to go public. Like Uber and Lyft, these companies also rely heavily on gig workers for their delivery services. Without the passage of Proposition 22, the companies would likely worry about potentially larger expenses to hire workers as employees.

Critics like Rep. Ro Khanna, D-Calif., have said that there’s nothing written into current labor law stopping Uber and Lyft from providing flexibility to drivers while classifying them as employees. The companies have countered that the logistics of such a model would be untenable since it would be too difficult to track time worked.

The companies faced a setback in August when a trial judge granted a preliminary injunction forcing them to reclassify their drivers as employees, although that ruling has yet to go into effect as the case makes its way through the legal process. The lawsuit’s fate is unclear now that the ballot measure has passed.

Representatives from Uber, Lyft and the California attorney general’s office did not immediately respond to requests for comment