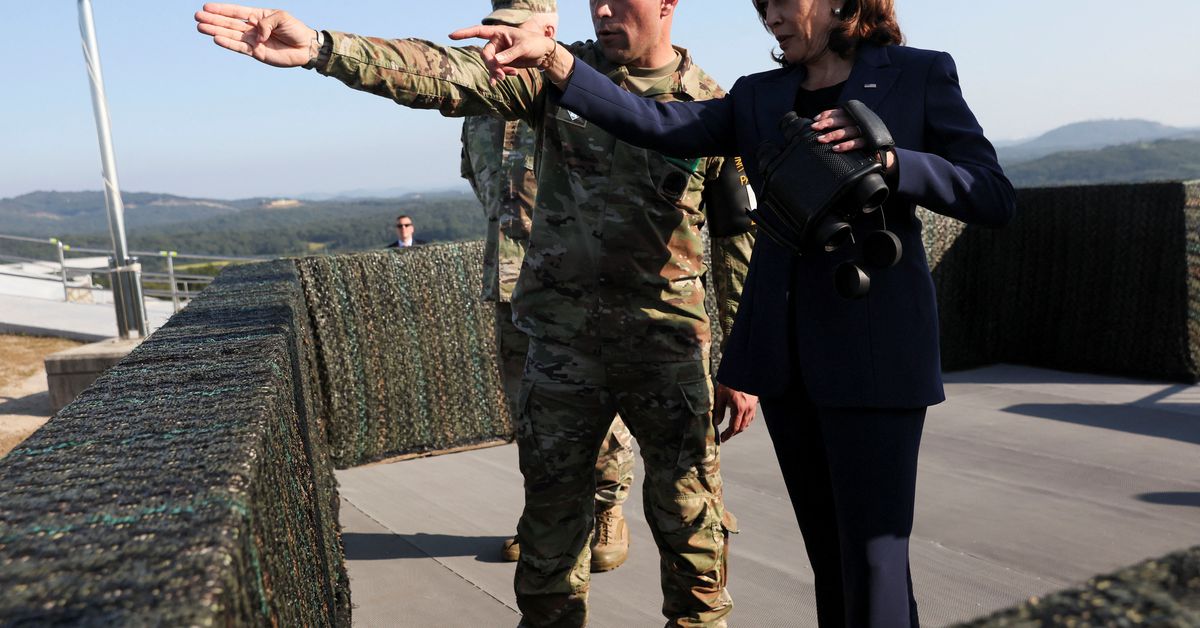 Soon after Harris wrapped up her Asia trip, North Korea fired two ballistic missiles from north of its capital, Pyongyang, late on Thursday in the direction of her flight from South Korea, the third such launch in five days.

Harris, in her first visit to the Demilitarised Zone (DMZ) separating the two Koreas, said the heavily armed border area offered a stark reminder of the "dramatically different paths" the two sides have taken.

"In the North, we see a brutal dictatorship, rampant human rights violations and an unlawful weapons program that threatens peace and stability," Harris said.

"The United States and the world seek a stable and peaceful Korean peninsula where the DPRK is no longer a threat," she said, referring to North Korea by the initials of its official name, the Democratic People's Republic of Korea.

Harris was in the DMZ after arriving in the South Korean capital, Seoul, early on Thursday amid simmering regional tension over North Korea's missile launches and China's actions in the Taiwan Strait.

North Korea launched two ballistic missiles from north of Pyongyang into the sea off its east coast, South Korea's military said, about two hours after Harris' flight departed for Washington.

The visit by Harris came amid fears that North Korea is about to conduct a nuclear test. South Korean officials say North Korea has completed preparations for what would be its seventh nuclear test and its first since 2017.

Harris and South Korean President Yoon Suk-yeol held talks and condemned North Korea's intensifying nuclear rhetoric and a series of missile tests, the latest of which was conducted on Wednesday.

"They condemned the DPRK's provocative nuclear rhetoric and ballistic missile launches," a White House statement said. "They discussed our response to potential future provocations, including through trilateral cooperation with Japan."

Harris and Yoon reaffirmed the goal of the complete denuclearisation of the Korean peninsula, the White House said.

Harris also reaffirmed a U.S.-extended deterrence commitment to its Asian ally, including "the full range of U.S. defence capabilities", it added.

Yoon's office said that if the North pushed ahead with serious provocations like a nuclear test, he and Harris agreed to immediately implement "jointly prepared countermeasures," without elaborating.

North Korea codified its right to use pre-emptive nuclear strikes in a new law early this month. North Korean leader Kim Jong Un has said it is developing nuclear weapons and missiles to defend against U.S. threats.

On Taiwan, Harris underscored that efforts to preserve peace and stability across the Taiwan Strait were an "essential element of a free and open Indo-Pacific", the White House said.

U.S. President Joe Biden's aides have been shoring up alliances to manage China in the region, including over Taiwan.

But Yoon told CNN in an interview aired on Sunday that in a conflict over Taiwan, North Korea would be more likely to stage a provocation and Seoul and Washington should focus on that concern first.

The DMZ, frequently called the last Cold War frontier, was drawn up as the 1950-53 Korean War ended in an armistice not a peace treaty.

The trip took on urgency after North Korea fired two short-range missiles off its east coast on Wednesday, the second test since Sunday, while South Korea and the United States are holding naval exercises involving a U.S. aircraft carrier.

The South Korean and Japanese navies said they would hold trilateral anti-submarine exercises with U.S. forces on Friday, designed to improve their capability to counter evolving North Korean threats, including its submarine-launched ballistic missiles.

Anna 63 days ago
you can tell alot about a news group like panatimes when they post out right lies. Every other story i have read about her trip tell the truth about what happened except panatimes a left wing rag of a news group

youknowmyname 64 days ago
Was that before or after harris said, “The United States shares a very important relationship, which is an alliance, with the Republic of North Korea, and it is an alliance that is strong and enduring…” So, I have to wonder if your publication is total bs... No wait, we all know it is...
View all comments (2)Add comment