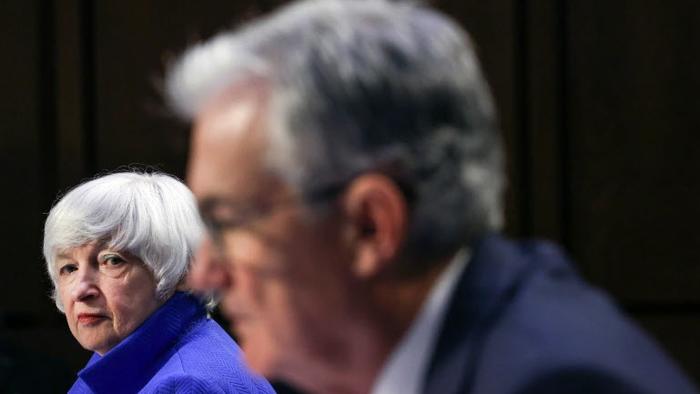 Two Fed Presidents Hit The Alarm Over The Broken Treasury Market... Which They Caused

Given the biggest buyer of bonds since the financial crisis is slowing purchases, why would anyone else want them? The Fed not buying bonds is defacto selling.
In the usual post-FOMC meeting jawboning circus, today we had not one but two Fed officials discussing not the topic du jour - Fed policy errors and soaring inflation - but something far more ominous: the broken Treasury market. Just days after a catastrophic 30Y Treasury auction which may well be the harbinger of what's to come as the market realizes that i) tapering is tightening and that without the buyer of first resort we will finally get some price discovery and ii) inflation, contrary to the latest Fund Manager Survey, is not transitory, both Cleveland Fed president Loretta Mester and NY Fed president John Williams warned markets that the Treasury market is "not as resilient" as it should be, and that even modest stress could break it. Unfortunately neither of them admitted that it's entirely the Fed's fault that what was once the world's most liquid market has become a political tool to be abused by central planners and power hungry politicians.

NY Fed's Williams was first, patting himself on the back by saying that the Fed's bazooka QE unleashed at the onset of the pandemic, “along with prompt fiscal measures enacted by Congress and emergency steps taken by the Federal Reserve and other government agencies, ultimately proved successful at restoring functioning in the Treasury and other financial markets” And while these measures "averted what could have been a severe financial crisis that would have had devastating effects on the economy" they are "also a stark reminder that these markets are not nearly as resilient as they should be.”

His next statement came dangerously close to the truth: “One thing that is clear when examining the causes of these market disruptions is that they were not primarily driven by economic forces, but rather by a failure of the markets to function in the ways they were expected to do in response to those particular circumstances” he said, failing to mention that the Fed owns a quarter of all Treasurys and up until now, has been monetizing every dollar in debt sold by the Treasury since March 2020, in the process becoming the only marginal price setter in the bond market.

Next up was Cleveland Fed President Loretta Mester, who said that "with uncertainty related to the pandemic, many investors sought to move to cash and even liquidated their positions in U.S. Treasuries that are seen as haven assets, showing “how uncertain” the environment was in March 2020, and necessitating Fed actions to re-establish functioning of that market, she says also ignoring the fact that the market was no longer functioning in the first place because of the Fed.

But then she also made a surprising admission, saying that the Fed’s actions “didn’t address the underlying structural issues that propagated the stresses.” However, like Williams, instead of looking in the mirror and admitting the Treasury markets in the US - like that in Japan - is broken because the Fed is now openly engaging in MMT/Helicopter Money and monetizing the deficit, there is no longer a Treasury market with fair and transparent price discovery. Instead she blamed new players, interconnections and technologies, who are “new sources of vulnerability,” as financial activity is increasingly moving outside of the banking system and that means that credit risk is increasingly being intermediated and outside the banking sector.

“We’re just going to need to ensure we have the ability to monitor risks and vulnerabilities not only in the banking system, but in the nonbank financial sector,” she said, clearly seeking to put all other financial actors under the Fed's supervision. The same "supervision" which failed to realize the simplest thing: when you become the primary - and for the past two years only - source of demand in the Treasury market, it is no longer a market but a political tool.

Having discussed the topic of the broken Treasury market (and every other market) due to the Fed's actions (and in the latest just released note from Rabobank's Michael Every we read that "It’s no longer a secret that markets are irrational due to central bank action") pretty much non-stop since our inception, and since there is little we can add to the beating of this particular dead horse, we will give the mic to Bloomberg's Vince Cignarella who cuts to the chase, writing that "Regulators Discuss Bond Liquidity, an Issue of Their Own Making."

His full thoughts below:

Financial regulators are meeting on Wednesday to address recent wild price swings in the U.S. Treasury market, presumably to find out why markets all of a sudden aren’t working properly. But traders say that, once again, rules created in Washington are having unforeseen consequences.

The Volcker rule which limited banks from taking large proprietary positions limits the amount of risk and, therefore, the amount of inventory banks can keep on their books. In times of QE, that’s no problem, the more supply the better. Bonds just kept going up as the Fed kept the cash coming.

But now, partly because of rising inflation expectations and partly because of the start of tapering, bonds have been falling and traders can’t hold and trade them the way they used to. Frankly, given the biggest buyer of bonds since the financial crisis is slowing purchases, why would anyone else want them? The Fed not buying bonds is defacto selling.

This is the regulatory agencies’ own doing and creating more rules to fix broken rules is not likely to help. Prices are volatile as traders try to trade the timing of the next rate hike. And if a central bank is eventually going to be trimming their balance sheet and removing liquidity it probably isn’t too smart to take them on. I tried it with the BOJ once in the 80’s, it did not end well.
Add Comment