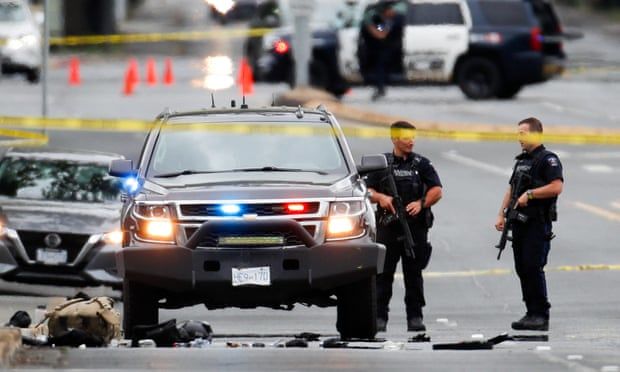 Police in Canada have identified the heavily armed culprits of a brazen bank robbery last week as twin brothers whose social media posts showed an obsession with guns and fears of government “tyranny”, and an interest in infamous bank heists.

On Saturday, police identified Mathew and Isaac Auchterlonie, 22, as the two men killed after they attempted to rob a bank in the municipality of Saanich, British Columbia.

Close to 20 people were in the bank at the time. “The energy from them was completely calm,” Shelli Fryer, who was there for a meeting with the branch manager, told CTV News. “When they did speak, it was with calm voices.”

When police arrived a chaotic firefight began as the brothers left the bank. The twins were killed in the shootout and six officers injured, including three with serious gunshot wounds.

“At first I thought it was fireworks, so I ran to the window and looked outside. And it was just a hail of bullets whizzing past everywhere, and the cops had the whole place locked down,” Christopher Lee Ford, who lives in the area, told Victoria city’s Capital Daily. He and his family sheltered in their dining room. “I watched two cops get shot.”

Police ordered businesses and residents to evacuate the area after multiple explosive devices were found, closing off the area for several days.

“This is something that shakes a community,” the Saanich police chief constable, Dean Duthie, told reporters in the hours after the shooting.

But the brothers’ actions during the bungled heist have left victims searching for answers.

“I just don’t know what they wanted. What were they waiting for?” said Fryer. “They had got all the money. They could have just taken the money and left right away. They would have been in and out before the police got there.”

Despite arriving at the bank heavily armed and with a cache of explosives, police say neither of the brothers had criminal records and were not previously known to police.

But Isaac Auchterlonie’s Instagram account, which has since been taken down, chronicled a growing animosity towards the federal government and a fixation on firearms. Scattered throughout the account were images of the young man firing rifles in the forest and praise for previous famous bank robberies.

One post shared excerpts from a documentary on the North Hollywood shootout, a 1997 bank robbery in which two heavily armed men injured more than a dozen people during a standoff with police.

Other posts referenced a conflict between the Irish Republican Army and British soldiers and police, as well as the Waco siege, when federal officers and soldiers stormed a Branch Davidian religious compound in Texas in 1993.

“When they try to give vaccine and they also try and take guns,” the post read, followed by the hashtags #tryandtakeit and #getwhatyoudeserve and #fuckyoutrudeau, in reference to the prime minister.

He also used the hashtags #tyranny, #donttreadonme and “tyrantrepellent #tryandtakeit when posting images of guns.

Nearly a week after the shooting, police have yet to release a timeline of events, including who fired first.

“There are still many questions and investigation efforts that need to take place in order to fully understand what took place and why,” Cpl Alex Bérubé said at a press conference on Saturday.

“The motive behind the armed robbery and subsequent exchange of gunfire with police has not yet been determined.”