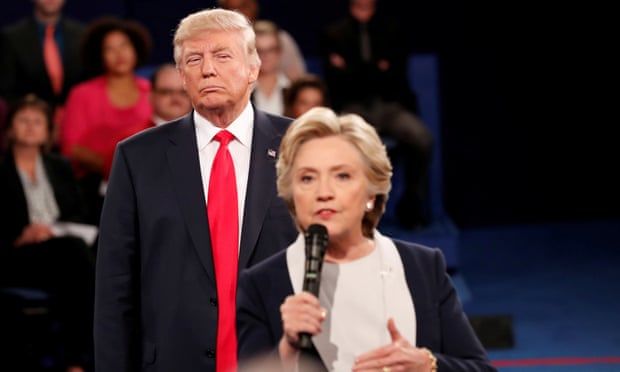 Clinton, James Comey and others accused of orchestrating Russia conspiracy that makes Watergate ‘pale in comparison’
Donald Trump has sued Hillary Clinton, the Democratic National Committee and other people and entities tied to the investigation of Russian election interference in 2016, claiming that in a bid to rig the election they orchestrated a conspiracy which made Watergate “pale in comparison”.

The suit came a day after the release of a letter from a prosecutor in New York who said he believed Trump was “guilty of numerous felony violations” in his business affairs, despite the district attorney in Manhattan choosing not to indict.

Trump beat Clinton for the presidency in 2016. Nonetheless, six years on he alleges she is guilty of “racketeering” and a “conspiracy to commit injurious falsehood”, among other claims.

The 108-page lawsuit follows suits filed by Trump and allies in the aftermath of the 2020 election, alleging Joe Biden’s victory was the result of electoral fraud. Out of 62 such suits, only one succeeded.

The suit was filed in US district court in the southern district of Florida, by lawyers from that state and Alina Habba, a New Jersey attorney has represented Trump in failed suits seeking to block investigation of the deadly Capitol riot on 6 January 2021, which Trump fueled with lies about electoral fraud.

Those suits have widely been seen as delaying tactics, meant to help Trump wait out the January 6 committee until Republicans can retake the House this November and kill the investigation.

Other attorneys for Trump have complained about Habba’s work, according to the Daily Beast.

Russia denies interfering in the 2016 US election to boost Trump. The US intelligence community agrees that it did.

Robert Mueller, the special counsel who investigated the matter, did not establish collusion between Trump and Russia but did list 10 instances in which the then-president may have tried to obstruct justice.

Mueller, who explicitly said he was not exonerating Trump, also detailed several connections between Trump aides and Moscow.

In August 2020 a Senate intelligence committee report detailed links between Paul Manafort, Trump’s campaign manager for part of the 2016 race, and Russian intelligence.

Manafort was jailed on charges of fraud. Trump pardoned him.

Regardless, Trump’s new lawsuit claims that in the run-up to the 2016 election, “Hillary Clinton and her cohorts orchestrated an unthinkable plot – one that shocks the conscience and is an affront to this nation’s democracy.

“Acting in concert, the defendants maliciously conspired to weave a false narrative that their Republican opponent, Donald J Trump, was colluding with a hostile foreign sovereignty.”

The suit claims the conspiracy involved “falsifying evidence, deceiving law enforcement and exploiting access to highly-sensitive data sources” in a plot “so outrageous, subversive and incendiary that even the events of Watergate pale in comparison”.

Clinton and her fellow defendants, it claims, “nefariously sought to sway the public’s trust” and “worked together with a single, self-serving purpose: to vilify Donald J Trump”.

According to the suit, “the deception, malice, and treachery perpetrated by the defendants has caused significant harm to the American people, and to the plaintiff, Donald J Trump, and they must be held accountable for their heinous acts”.

The suit seeks “punitive damages, costs, and such further and other relief as this court may deem just and proper”.

It says Trump “has sustained significant injuries and damages including, but not limited to, expenses in the form of defense costs, legal fees and related expenses incurred … in an amount no less than $24m and continuing to accrue, as well as the loss of existing and future business opportunities”.

Eli Hoenig, a former federal prosecutor, now an analyst for CNN, said: “It’s difficult to put into words just how deeply flawed and utterly hopeless this lawsuit is.”

Philippe Reines, a former Clinton spokesperson named in the suit, pointed to how damaging an actual trial could be for Trump when he tweeted: “I look forward to deposing the plaintiff.”

A lawyer for Strzok, the FBI agent who was fired for sending messages critical of Trump, told Politico: “We haven’t had a chance to read the complaint, but knowing the former president, there’s probably very little in there that’s true.”

Some in Republican leadership reportedly fear Trump’s grip on the party and fixation on Clinton, 2016 and supposed electoral fraud could cost the GOP dearly in elections this year and in 2024.

In legal jeopardy over his business affairs and attempted political subversion, Trump has all but declared he will run for the White House again.

Speaking to reporters in Brussels on Thursday, Biden said of the 2024 presidential election: “I’d be very fortunate if I had that same man running against me.”
#Donald Trump  #Joe Biden
Add Comment