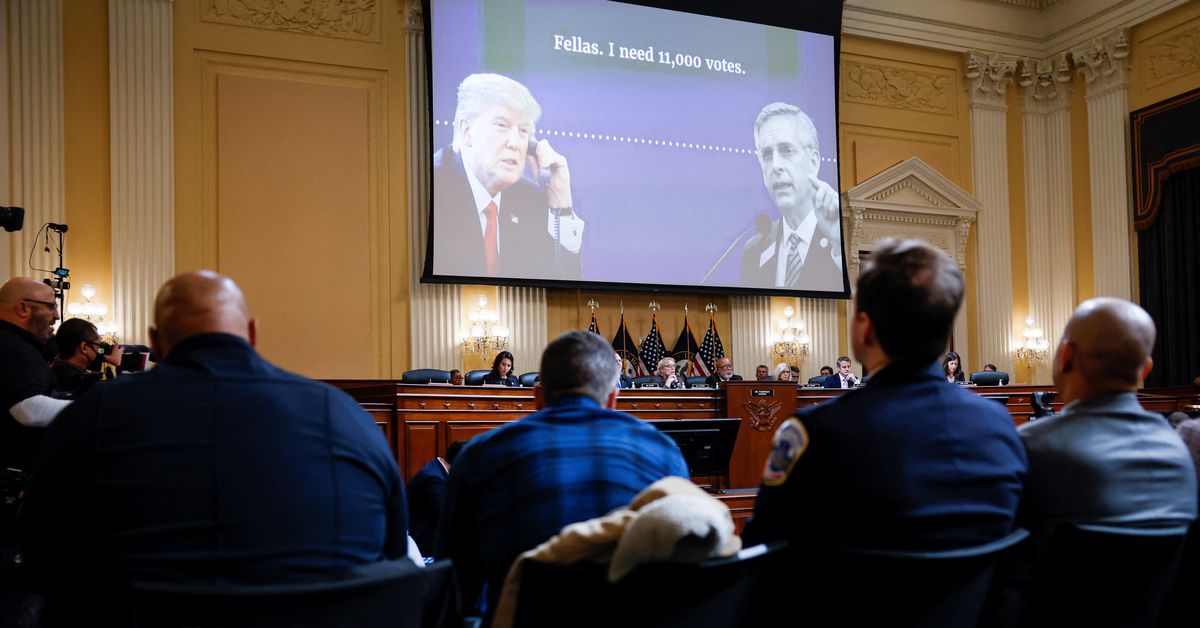 The U.S. House of Representatives panel probing the Jan. 6, 2021, attack on the Capitol asked federal prosecutors on Monday to charge Donald Trump with four crimes, including obstruction and insurrection, for his role in sparking the deadly riot.

The Democratic-led select committee's request to the Justice Department - after more than 1,000 witness interviews and the collection of hundreds of thousands of documents - marked the first time in history that Congress has referred a former president for criminal prosecution.

The request does not compel federal prosecutors to act, but comes as a special counsel is overseeing two other federal probes of Trump related to the Republican's attempt to overturn his 2020 election defeat and the removal of classified files from the White House.

The committee asked the Justice Department to charge Trump with four potential felonies: obstruction of an official proceeding of Congress, conspiracy to defraud the United States, making false statements, and aiding or inciting an insurrection.

"An insurrection is a rebellion against the authority of the United States. It is a grave federal offense, anchored in the Constitution itself," Representative Jamie Raskin, a Democratic select committee member, said as he announced the charges.

Trump gave a fiery speech to his supporters near the White House the morning of Jan. 6, and publicly chastised his vice president, Mike Pence, for not going along with his scheme to reject ballots cast in favor of Democrat Joe Biden. Trump then waited hours to make a public statement as thousands of his supporters raged through the Capitol, assaulting police and threatening to hang Pence.

Monday's meeting was the last public gathering of the nine-member panel that spent 18 months probing the unprecedented attempt to prevent the peaceful transfer of power by thousands of Trump backers, inspired by his false claims that his 2020 election loss to Biden was the result of widespread fraud.

Representative Bennie Thompson, the committee's chairperson, slammed Trump for summoning the mob to the Capitol and criticized him for undermining faith in the democratic system by repeating false claims of fraud.

"If the faith is broken, so is our democracy. Donald Trump broke that faith," Thompson said.

The committee also said it referred four Republican House members, including Kevin McCarthy, the favorite to be the next speaker, to the chamber's ethics committee, for failing to comply with subpoenas as it investigated the attack.

The other three subpoenaed representatives were Scott Perry, Jim Jordan and Andy Biggs. Spokespeople for Jordan, Perry and Biggs dismissed the action as political stunts. McCarthy's office did not respond to a request for comment.

Republicans, who take control of the House on Jan. 3, are unlikely to act against members of their own leadership.

Trump has already launched a campaign to seek the Republican nomination to run for the White House again in 2024.

Five people, including a police officer, died during or shortly after the incident and more than 140 police were injured. The Capitol suffered millions of dollars in damage.

"Among the most shameful of this committee's findings, was that President Trump sat in the dining room off the Oval Office, watching the violent riot at the Capitol on television," said Representative Liz Cheney, one of two Republicans on the committee and its vice chairperson.

A summary of the committee's report also said the panel believed there were grounds to recommend criminal charges against some others close to Trump, including attorney John Eastman.

It named other Trump associates, including former Department of Justice official Jeffrey Clark, former White House Chief of Staff and House member Mark Meadows and two lawyers - Kenneth Chesebro and Rudy Giuliani - as participating in conspiracies the panel is linking to Trump.

An attorney for Eastman responded with a statement criticizing the committee as partisan. Representatives of the others did not immediately respond to requests for comment or declined comment.

A jury has already found members of the right-wing Oath Keepers militia guilty of sedition for their role in the attack.

Trump has faced a series of legal problems since leaving office on Jan. 20, 2021. His real estate company was convicted on Dec. 6 of carrying out a 15-year-long criminal scheme to defraud tax authorities.

Trump has dismissed the many investigations as politically motivated. On Monday, he said any prosecution would mean he was improperly being charged twice, after he was impeached last year for a second time but then acquitted in the Senate.

"The Fake charges made by the highly partisan Unselect Committee of January 6th have already been submitted, prosecuted, and tried in the form of Impeachment Hoax # 2," Trump said on his Truth Social platform.

Hours into the riot, Trump released a video statement asking rioters to go home but also telling them that he loved them. He then sent a tweet saying, "These are the things and events that happen when a sacred landslide election victory is so unceremoniously & viciously stripped away."

The select committee of seven Democrats and two Republicans approved the recommendation of charges unanimously.

The House Ways and Means Committee is due to meet on Tuesday to decide what to do with Trump's tax returns, which it obtained late last month after a long court fight. Trump was the first presidential candidate in decades to not release his tax returns during either of his campaigns for president.