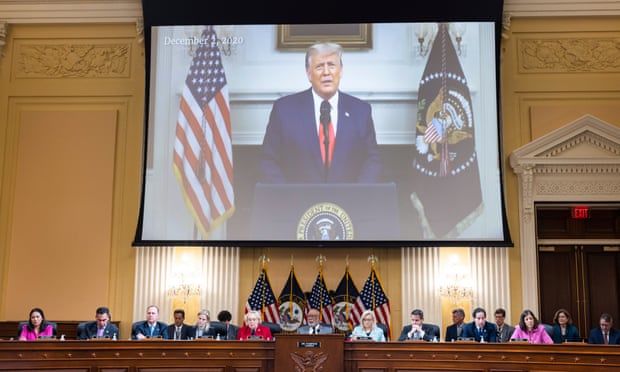 ‘The big lie was also the big rip-off,’ says Democrat Zoe Lofgren after January 6 committee appears to make case for fundraising fraud
The House select committee investigating the January 6 Capitol attack appeared to make the case at its second hearing that Donald Trump and his campaign engaged in potential fundraising fraud, raising $250m for a Trump “election defense fund” that did not actually exist.

The hearing, led by Congresswoman Zoe Lofgren, also showed that Trump and the campaign raised millions for the fund and then funneled the money to, among other destinations, the Trump business properties as well as Trump’s own Save America political action committee.

In showing that Trump deceived donors into contributing money to the election defense fund – based on claims about a stolen election that his top advisers told him were nonsense – the panel suggested Trump engaged in potential fraud as well as other violations of federal law.

The select committee said through filings and other evidence, it found the Trump campaign raised $100m in the first week after the election and overall raised about $250m as it asked donors to help fundraise legal challenges to the results.

But the “Official Election Defense Fund”, as it was billed on fundraising emails that were repeatedly sent up until 30 minutes before the Capitol attack, did not formally exist, according to Trump campaign aides Hannah Allred and Gary Coby, who testified to the panel.

“The big lie was also a big ripoff,” Lofgren said of the deception at the hearing, later telling CNN: “He intentionally misled his donors, asked them to donate to a fund that didn’t exist and used the money raised for something other than what it said.”

The Trump campaign was able to fundraise through to January 6 since Trump continued frivolous election litigation past the so-called safe harbor deadline, which is generally accepted as the date by which state-level election challenges – like recounts – must be completed.

The select committee doubled down on establishing Trump’s criminal or corrupt intent in seeking to overturn the 2020 election results by showing he could not have reasonably believed he had defeated Biden when some of his most senior advisers told him otherwise.

The admissions by Trump’s top officials are significant as they could put federal prosecutors one step closer to being able to charge Trump with obstructing an official proceeding or defrauding the United States on the basis of election fraud claims he knew were false.

The select committee in short made the case that if Trump is ever charged, he could not use the defense that he acted in potential criminal ways because he earnestly believed there was election fraud because he was told otherwise – the doctrine of “wilful blindness”.

At the second hearing, the select committee also revealed a new piece of information: that Trump falsely declared victory on election night at the White House at the insistence of his attorney Rudy Giuliani, and against the advice of every other presidential adviser.

The former president had infamously claimed on election night that “frankly, we did win this election” even though no winner had yet been announced, as a number of the most closely contested states were still counting millions of mail-in ballots.

How Trump came to falsely declare victory on election night was not exactly clear, until the select committee on Tuesday played a video of the top Trump White House aide Jason Miller testifying that Giuliani recommended to Trump they just pretend that they had won.

“They’re stealing it from us,” Giuliani told the then president when he found him at the White House, according to Miller, who also testified that the former New York mayor seemed drunk. “Where do all the votes come from? We need to go say that we won.”
#Donald Trump
Add Comment